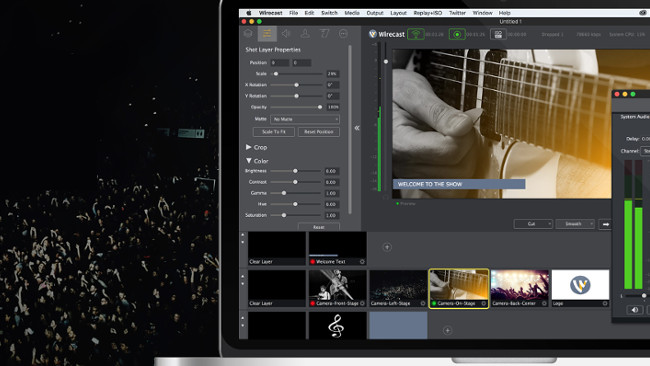 Wirecast continues to mature as a live-streaming application with improvements to performance, user interface and additional features.

The application has been re-engineered to lower CPU usage and, in computers with Intel QuickSync or nVidia NVENC hardware, to accelerate encoding using GPU.

Along with this, there is an Output Statistics window that allows monitoring of resources while capturing, encoding and streaming.

Both the Pro and Standard versions gain Dynamic Editing to allow flipping, rotating, color correcting or other functions on the fly.

The streamlining of the UI may be the most important improvement, complete with a new shot editor and more options to toggle between shots, while eliminating some of the clutter of previous versions.

ScreenFlow is among the more popular screen capture utilities, owing to its flexibility and ability to deliver directly from the application. The just-released ScreenFlow 6 represents the most significant update since Telestream debuted the product.

The ability to record part of the screen has long been requested by users and it has now arrived with version 6. It gains similar improvements to audio mixing as Wirecast 7 and audio waveforms have been improved displaying with greater accuracy. Its UI, as well, received a significant makeover, with far greater control over timeline editing.

We recently published a full review of ScreenFlow 6 that you can find HERE. We will be looking at Wirecast 7 in greater depth in the coming weeks, so check back with us!