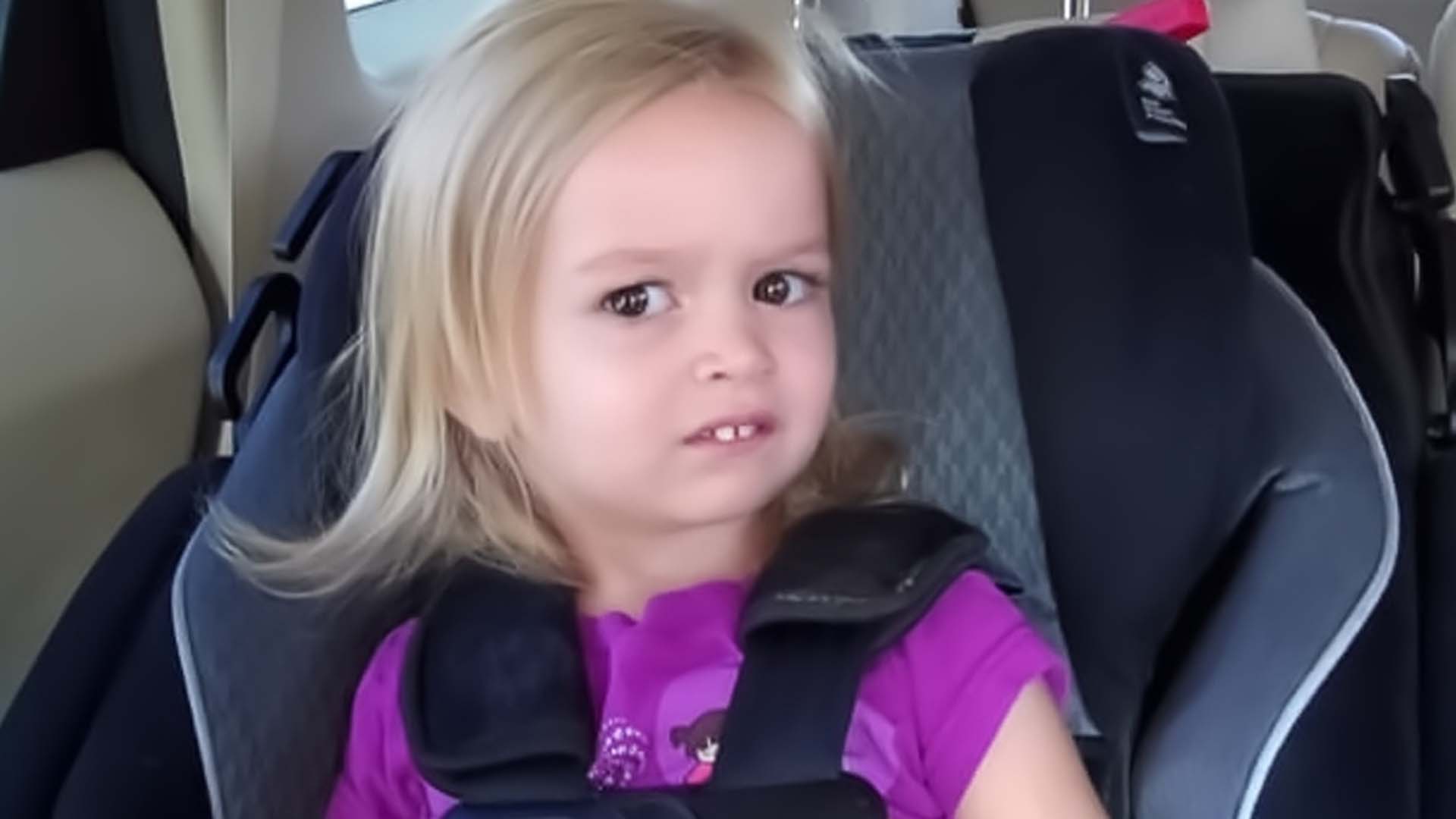 After the digital ownership of ‘Side-eyeing Chloe’ above ‘only’ sold for $74,000, is the rush for non-fungible tokens (NFTs) over? And what was it about in the first place.

We’ve been thinking of writing about non-fungible tokens (NFTs) for a while now, and an excuse to be able to use the perfect image to illustrate many people’s feelings about the whole concept was too good to miss. ‘Side-eyeing Chloe’ (above) has expressed deep skepticism for concepts and arguments online in thousands of memes, and now, in an agreeably self-referential move, we can use her as we confidently say that the NFT of her image is owned by a Dubai-based music production company called 3F Music.

They don’t control the copyright or anything like that, which is why we can use it (the picture credit we have used is, as far as we know, the last time someone attempted to assert any image rights — which is rather a case of shutting the stable door after the horse has bolted, but still). But perhaps what makes the story so remarkable is not that someone has just paid $74,000 for ownership of an image that already exists on millions of hard drives and in data centres around the world, but that it was expected to go for a lot more.

So, here’s everything — well, some of — what you always wanted to know about NFTs but were afraid to ask.

What exactly is a NFT?

Non-fungible tokens have been around since 2015 and are essentially spun out of the same blockchain technology used in cryptocurrencies like Bitcoin. Indeed, the vast majority of them are actually part of the blockchain of another leading crypto, Ethereum. But while Ethereum is fungible, which means all or part of it can be replaced in a transaction, a non-fungible item is absolutely unique and is one of a kind.

Basically the distributed ledger of blockchain is used to prove ownership of a NFT and a NFT can be pretty much anything digital. There’s a nice little anecdote on The Verge where the author drops a line about people even being able to buy their best past tweets. An edit just underneath it points out they were joking but not long after Jack Dorsey, the founder of Twitter, sold the NFT of his first tweet for $2.9 million.

This is, of course, crazy. Anyone can share a picture of that tweet. Look we just did. But the whole point of NFTs is that they are capable of just this kind of reality-warping trick. They basically turn anything digital into a speculative asset and, as anyone who has ever bought a house will tell you, that means its value loses contact with its material value in the real world and becomes whatever anyone is willing to pay for it.

The art market has worked like this for, essentially, always (and indeed is where the majority of the recent NFT activity has taken place). There you have always been able to find hyperbolic prices paid for objects just because that is basically what someone is willing to pay to acquire the asset. The sale of Beeple’s NFT ‘Everydays - The First 5000 Days’ for $69 million in March was considered peak insanity by many commentators, but is not really any different to someone paying Jeff Koons $91.1 million for a steel sculpture of a rabbit in 2019. Yes, they have a 41in steel rabbit to show for it, but that’s hardly going to account for the $22.1m difference, is it?

So, can I make money out of it?

The answer is yes. You can make money as an investor in much the same way as you would purchasing a piece of art, with, of course, the caveat being that values can go down as well as up. This is all made even more volatile by the use of Ethereum and other crypto as the means of purchase. Caveat emptor and all that sort of thing.

More importantly, you can also do it as a creator. A whole digital cottage industry has sprung up around NFTs with the result that there are multiple marketplaces such as SuperRare and Nifty Gateway where you can sell them. There’s a good list here.

As you will see from the list there is also an intriguing new feature that NFTs enable and that is for the originator to get a royalty percentage every time that the token is resold. Say you sell a video NFT for $100 and set the royalty at 10%. If that is then resold in the future for $200, you would get $20. If it really breaks through and sells for $1000, then you get $100. And so on.

It’s a neat idea and one that corrects one of the longstanding faults with payments for art in general, that the creator is often shut out of the valuable markets that can exist downstream. It is, however, only currently available as a feature within certain marketplaces and is not portable; if the NFT is sold in another marketplace the royalty deal is no longer valid. But there are proposals for this to be baked into the Ethereum blockchain, so a future standard could emerge.

Has the bubble burst already though?

Has the NFT bubble burst? The answers to that is ‘probably, but prepare for re-inflation’ (if you will excuse the macroeconomic joke there). While Katie Clem, the mother who initially took the picture of her side-eyeing daughter, expressed delight at getting anything for it, there was disappointment that it didn't sell for as much as some NFTs earlier in the year. ‘Side-eyeing Chloe’ sold for 25 Ethereum (the $74k figure is what the exchange rate was at the time), whereas the NFT for Nyan Cat (below) went for 300 back in February — $880k at the same rate of exchange. 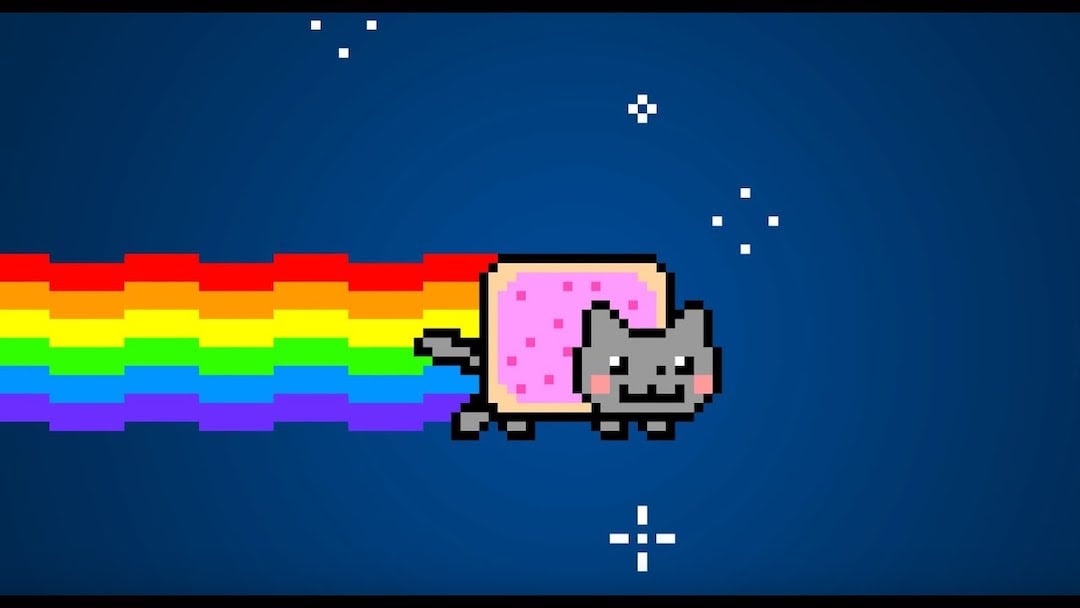 But anyone who has paid any attention to anything involving crypto recently knows that the values can change with incredible volatility. The NFT market is as likely to collapse and burn as it is to ascend to the stratospheric heights once more.

There are though problems. First off, while there is no copyright attached to NFTs, there are in the original artwork. Not everyone selling them had the right to make them in the first place.

There is also the same environmental argument regarding NFTs that can be used about all crypto — maintaining the blockchain causes greenhouse gas emissions. It has been calculated that the average NFT has a carbon footprint equivalent to more than a month’s worth of electricity for a person living in the EU. That’s a fair amount and while solutions are being worked on, with leaner and greener crypto in the pipeline, as a result Chloe is not the only one looking at the whole subject with a certain amount of side-eye.