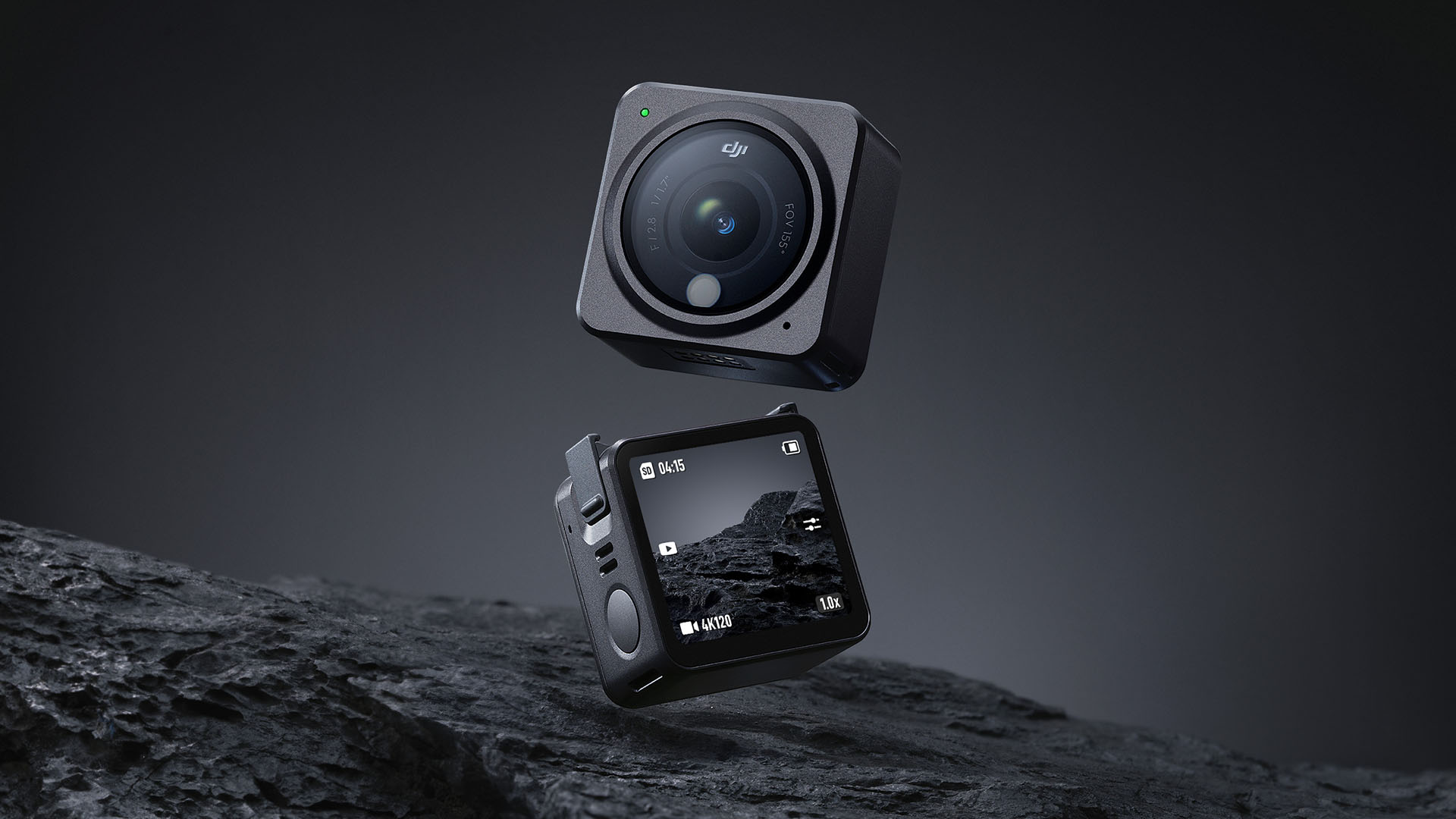 The DJI OSMO Action has an army of fans, and they've been waiting for the camera's sequel. Today, DJI announced the Action 2 with a ground-up redesign in both looks and concept.

Before Insta360 released the ONE R, the only other real contender for GoPro's throne was DJI with its OSMO Action. The camera was the first of its type to feature a front-facing display for selfie shots. Combined with excellent picture quality and reliability, it found huge success, particularly after mid-life firmware upgrades that added new features and fixed any issues users had found.

The OSMO Action is still a capable camera now, but users have been looking forward to its follow-up, and today here it is.

Like the GoPro HERO10 earlier this year, the Action 2 has been an open secret, with a highly accurate series of leaks coming to prominence, along with the camera being inadvertently spotted within a particular YouTube influencer's video channel! 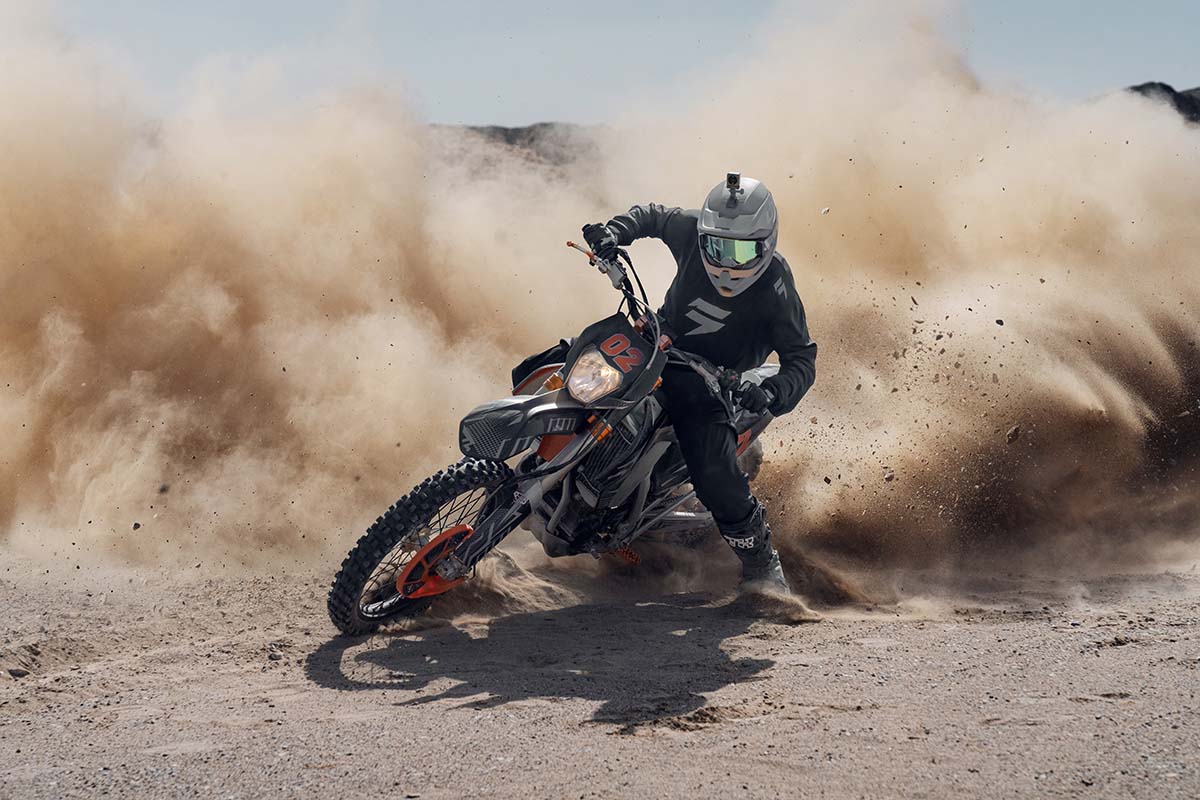 The DJI Action 2 being used as a helmet cam, showing its compact size. Image: DJI.

The DJI Action 2 drops the OSMO naming scheme, as well as all conventional design. Instead, the new camera is an entirely modular affair, not dissimilar to the Insta360 ONE R, but with a very different attachment system.

The ONE R was clipped together with plastic clips, and the whole assembly was firmly held together through any rough action filming by a plastic frame that users have to house the camera inside. The DJI Action 2, on the other hand, uses strong magnets in combination with clips built into the modules to hold the assembly together, with no requirement for a plastic frame. We understand that although the camera unit is rated for 10m water submersion on its own, you'll need the waterproof housing if the device is going to be used in water with the front touchscreen module or the power module, which aren't waterproof. 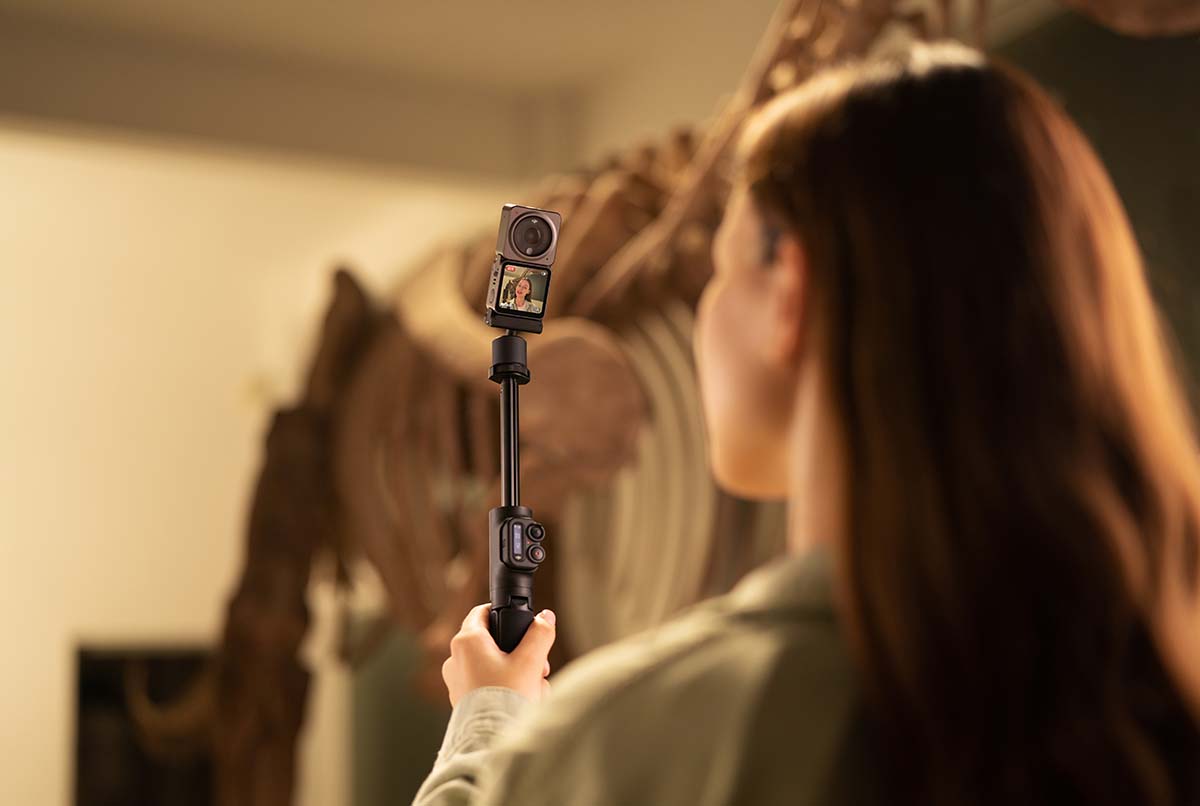 The DJI Action 2 being used in selfie configuration, showing off the detachable wireless remote attached to the selfie stick. Image: DJI. 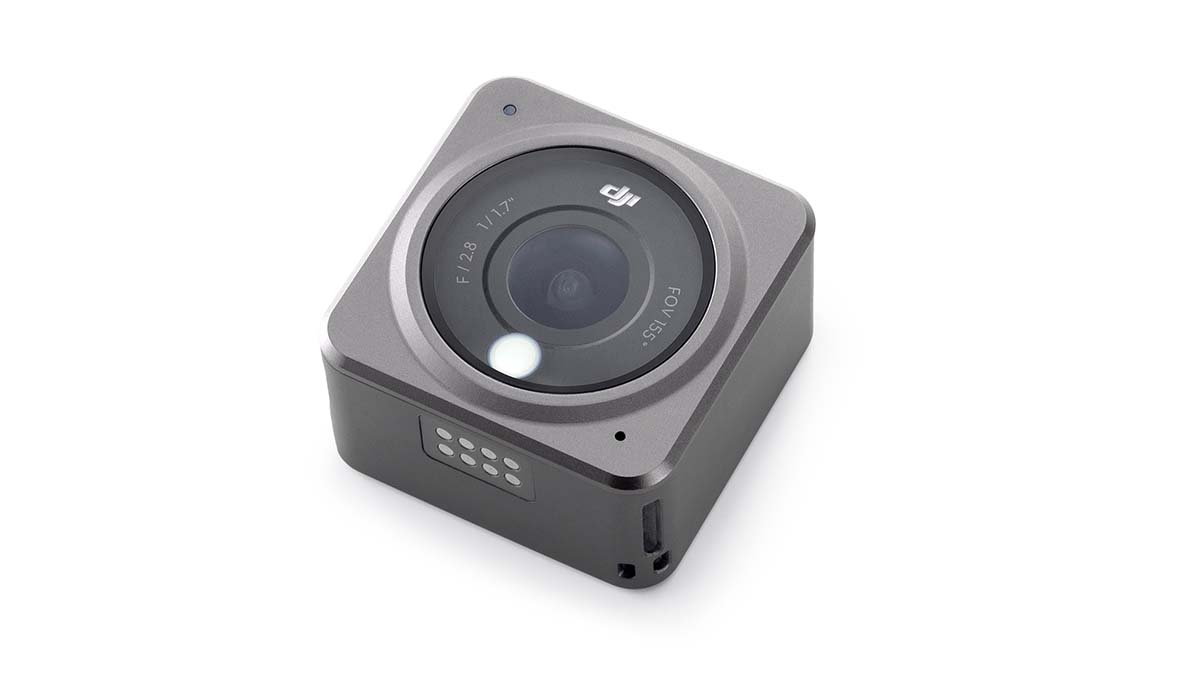 The DJI Action 2 camera unit. The big disc at the bottom of the lens is the new colour temperature sensor. Image: DJI.

There's a bit to unpack here, so let's take a closer examination. GoPro has set the bar very high with HyperSmooth, and along with Insta360 also featuring some extremely capable stabilisation, RockSteady 2.0 has some lofty heights to reach. But if any company is capable of doing it, it's DJI. The quality of the cameras on its latest drones has improved drastically since the early days of the Phantom. No doubt this has been a result of DJI's stake in Hasselblad. We've recently seen just how far DJI's camera development has come along with the Ronin 4D. 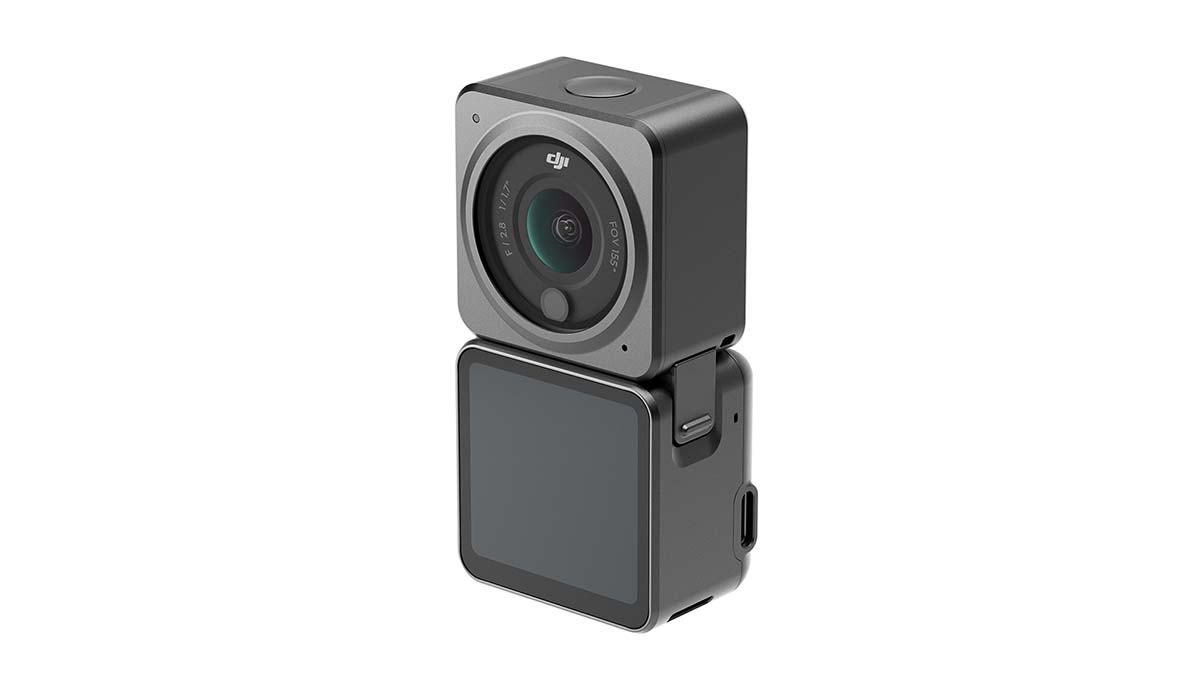 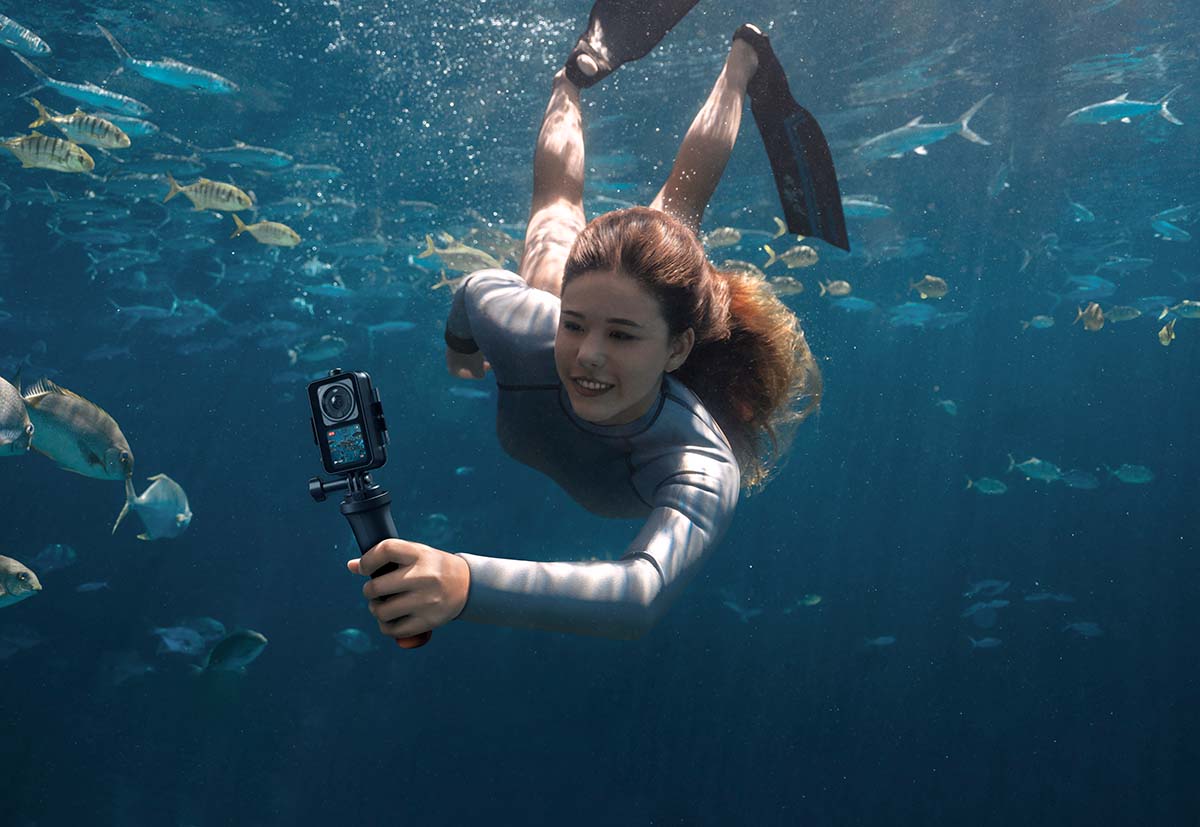 The DJI Action 2 being used inside a dive case. Image: DJI.

The sensor inside the Action 2 is 1/1.7-inches with 120fps 4K capability, which is a larger chip size than the HERO10.

Unlike the ONE R, the Action 2 fits together in two parts. However, it can be used as a one section camera, too. For example, the camera section can be mounted alone, making for a compact helmet cam similar to GoPro's much-missed Session series. The difference is that the camera module on the Action 2 has its own 1.76" touch screen on the rear for easy shot framing.

The magnetic mounting system is used all over the Action 2's body, for example, to attach the camera to a helmet mount or a magnetic pendant that users can hang around their necks. It is also being utilised for accessories such as the Macro Lens adaptor, which simply affixes to the front of the camera module. It wouldn't be too much of a stretch to imagine further such adaptors in the future.

The magnetic attachment system is backed up by locking slots on the body that clips fit into, preventing the assembly from pulling apart. When the camera unit is used with the other modules, such as the power module, or the front touchscreen module, the camera clips together in a vertical orientation. This might make it a little bit more unwieldy for helmet mounting, but generally in that type of use scenario you would probably just want to use the camera unit on its own.

This magnet system is also used to adapt the camera to different mounts such as the now industry standard GoPro style fingers. There's no 1/4" screw mount on the camera module itself, but there is a Ball-Joint adaptor that can be used on support such as tripods etc.

The front touchscreen module is more than just a framing aid. It also, as the name very obviously suggests, acts as a touch screen, allowing all settings on the camera to be adjusted. This is one of the drawbacks of existing cameras with front-facing screens, particularly if they are on a mount and quickly need a setting change.

The colour temperature sensor is also quite interesting. This is designed to make the camera better handle complex lighting situations, and it isn't simply some extra processing. The sensor can actually be seen on the camera unit below the lens. How it works is unknown, but it will be fascinating to see how well it performs in practice.

Lastly is the DJI Mic. This is an extremely interesting development, and the system is similar to RØDE's Wireless GO system. The system offers 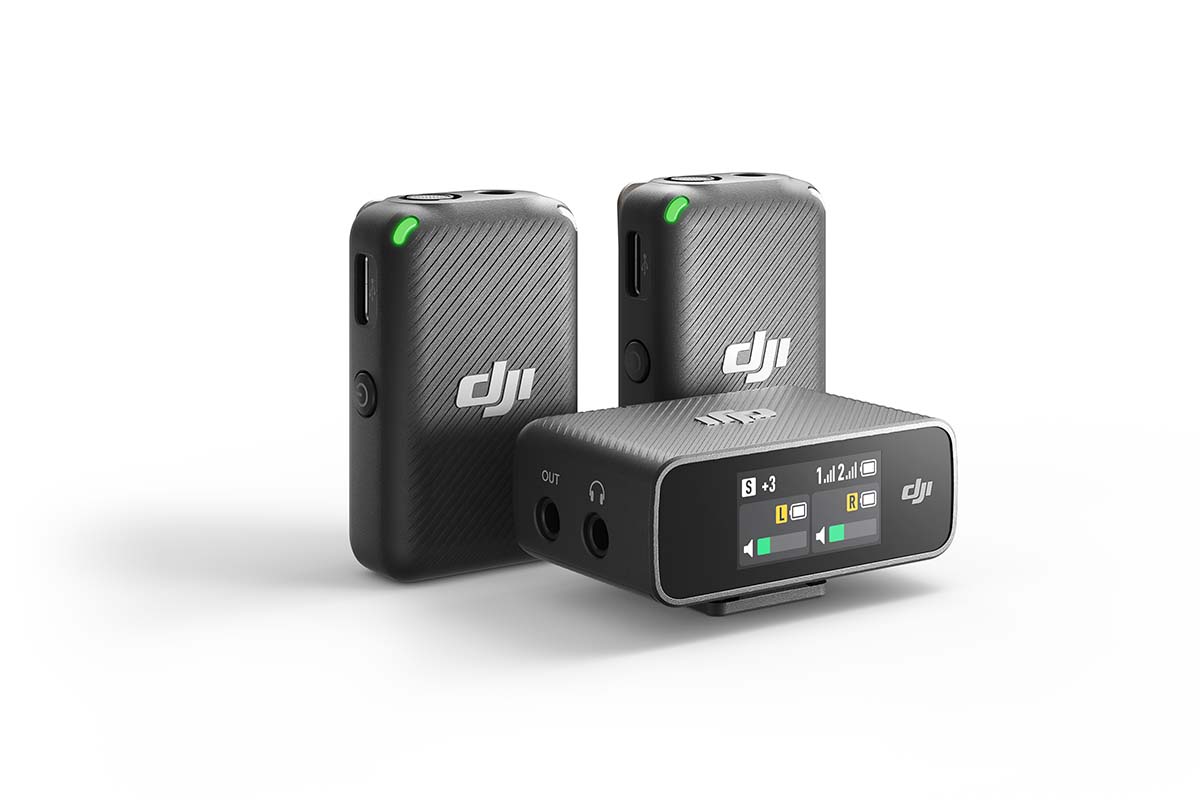 The original OSMO Action retailed for much less than its closest rival. The Action 2 does cost more than its predecessor, but what we appear to have here is one very feature-packed device.