Is this the most important new computer for a decade? 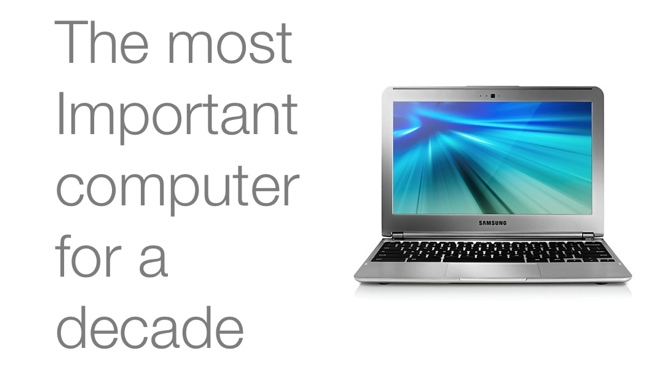 Is this the most important new computer for a decade? It might not sound a likely candidate for that award. It's not very powerful. It's made of plastic. You can't run your favourite applications on it. You certainly can't use it to edit video. And yet, for reasons I'll explain below, I think it's pretty important.

It's a Chromebook. It runs Google's "operating system" that is based around their browser and their cloud ecosystem. That's important, but Chromebooks have been around for a while now and they haven't been a massive success - especially in comparison with the explosive growth in tablets. But this one is different. Previous Chromebooks used low power Intel chips: Atoms, Celerons etc, and they worked fine. They weren't cheap, though, and you could easily find cheaper conventional laptops running Windows, and these, most people argue, are a better bet, because you can use all your existing applications and they work offline as well.

This one doesn't use Intel. It doesn't even have a chip that's compatible with so-called "X86" software (from the days when your computer had a 802086, 80386, 80486 chip, until that sequence was ended by the arrival of the Pentiums). What it has instead is a smartphone chip - the same one that pops up in Samsung's high-end phones and tablets. The dual core chip in this little PC isn't going to break any speed records - but it doesn't have to. because Google's Chrome OS is so much lighter than the other heavyweights like Windows and Mac OS X. Your data is stored in the Google's cloud. Chrome is closely tailored to the hardware so the OS doesn't carry a million drivers you'll never use and other clutter that would otherwise slow your computer down. And - well hidden under the hood - Chrome OS is built on Linux, which has always had a justified reputation for being efficient with less powerful processors.

But here's the biggest reason why a mobile phone chip can power a whole PC. It's because you can't do any of the things that would really tax a slow processor. All you can do on this thing is browse and write documents. Except, remarkably, that you can play 1080p video; presumably taken care of by dedicated video decoding chips. But the point is that this computer is not behind the curve; it's ahead of it. This is the way all computers are going.

So, what does this mean?

Cloud computing: it's already started. Before long, the default will be to store in the cloud. Anyone using Dropbox is already doing it without giving it a second thought. The new Chromebook comes with a free 100GB of online storage courtesy of Google.

It's ergonomically almost perfect: Very thin, but with an 11.6 inch screen and a full-sized keyboard. I have an 11 inch Macbook Air and with the two side by side, I only have to screw my eyes up slightly to lose the ability to tell them apart. And - you may be surprised to find out - it's pretty fast. With no lumbering hard disk to slow things down, and with only "lightweight" tasks allowed, it's massively quicker - and hence nicer -  than any Netbook that I've ever used. (Please don't confuse this computer with a Netbook. The only thing Netbooks really achieved was proving that people do want small, cheap laptops. I've owned five of them and in hindsight all of them were woefully underpowered)

With no full-scale desktop operating system to wade though like, the new Samsung Chromebook feels snappy and is every inch a practical device for every day use.

As long as you're connected to the Internet.

So, what happens if you lose your Internet connection?

You can use Google Docs offline just fine. At which point, this is just like any other computer but with the additional benefit that everything on it is backed up in the cloud automatically. What happens if you lose it, or if you're on location and a passing elephant stamps it into 18 inches of mud? You just buy another one (for USD$250 or UK£229) and sign in. All your stuff will be there, exactly as you left it.

To be perfectly honest, I would rather carry one of these around than my Macbook Air. The "Air" is a lovely thing, but cost nearly five times more than the Chromebook, and yet there's nothing that I do when I'm travelling with the Mac that I couldn't do on the Chromebook. If you're looking for a computer to take on your next shoot for note-taking and email, this could be the one. Buy a MiFi with a SIM for the region you're working in and you've got a connected, lightweight workhorse computer for next to nothing.

We're still working on the RedShark comments system. If you'd like to comment on this article, please email editor@redsharknews.com. We'll publish the best ones.