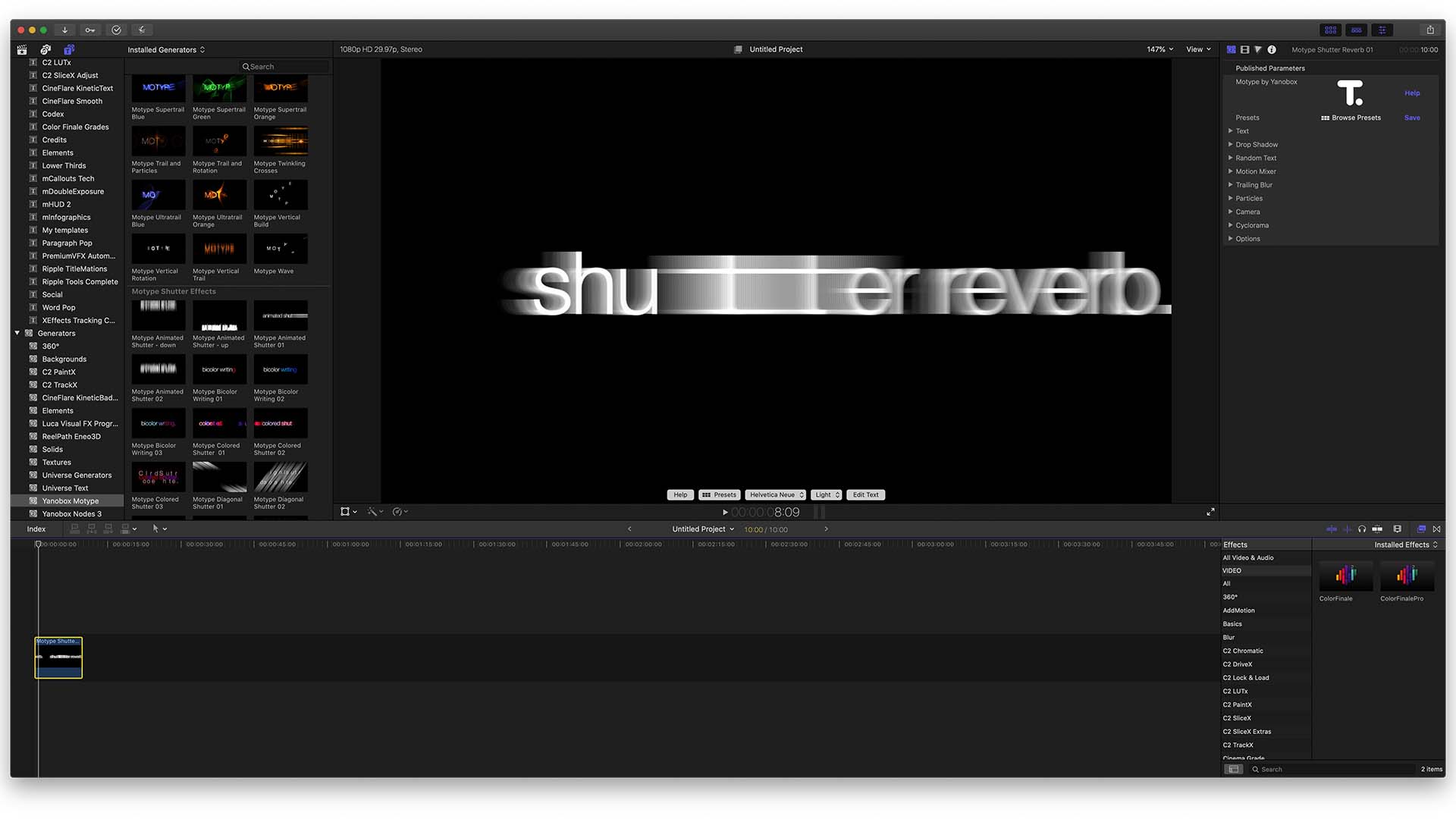 Erik Vlietinck takes a look at Yanobox' Motype, possibly the only titler you'll ever need.

Titles, who doesn’t need them? And who doesn’t want them to be at least a bit appealing, drawing attention to what follows? Yanobox’s Jean Marc Noel, who we all know as the chap behind Yanobox Nodes 2 and Mosaic, has upgraded Motype with better particles, an animated shutter and a smart preset browser, and has made Motype 1.5 a lot more exciting in the process.

Motype is a plug-in for Final Cut Pro X, Motion, Premiere Pro and After Effects. It offers an abundant number of settings that allow you to create animated single-row titles that show up statically or dynamically, with or without moving shadows, backdrops, etc. So far, nothing spectacularly unique, I’d say, but there are a few things that set Motype apart from its competitors. Its ability to combine a title with animated particles and now also the animated shutter that allows you to create “natural” character motion will let you create titles that you’ll have a hard time creating with anything else. Particles can be taken from the title text itself, a texture — some 22 of these to choose from — or an image. Those taken from the title text itself are perhaps the least interesting. The texture based particles, however, are something entirely different. They — and the animated shutter functionality — are the reason why Motype 1.5 could be the only title generator you’ll ever need.

With these animated textures ranging from crosses and circles to dial meters, flares and backdrops, you can create titles that might actually be more exciting than the movie itself.

Within the particle Inspector panel, you can set the particle orientation, position, start time and duration of the animation itself as well as its increase and decrease times, velocity axis and mode, count, size and colour. These effects animated very smoothly on my non-production mid-2017 27-inch iMac, even in 4K ProRes 422(HQ) and every other setting in Motype activated before background rendering finished.

The animated shutter adds another level of interest to the morphing effect as it lets you turn the common blur of animated text into a shuttered effect that dynamically freezes and blurs the morphing of characters in tandem with its animation parameters.

You could already accomplish that effect sort of by turning on the constant shutter mode and setting a value for the shutter angle. However, that would only create a constant morph effect, not one that dynamically adjusts itself in relation to the other motion parameters and that makes all the difference.