Following up from the original, TourBox Tech have released the Neo another version of their TourBox control surface priced at $169. Is it any good and what does this new version bring to the party?

The TourBox is smaller than you might expect - designed not to take up a huge amount of space on your desk and also having all the controls fall easily beneath one hand. It’s collection of tactile buttons and dials and associated Console app allow a wide range of control options for popular image and video editing software.

It consists of 14 controls with each with a different form factor, it’s designed to be used without the need to look at it, there are no on device labels unlike Logitech’s Stream Deck products. The 3 dials are a different orientation and type and the buttons are located in separate areas. These are also sized or oriented differently to help locate them without the requirement to glance down.

So why the new version? this almost identical looking unit comes with a couple of changes. The visual difference is down to the removal of the original’s USB-A pass through socket, you only get a single USB-C connection here. This is rather unfortunate as it was one of the things that set the original TourBox apart from the competition.

The other changes are welcome push to click functions that have been added to the main central dial and also the low profile wheel in the bottom left hand side. Although I still think that the central wheel would benefit from a bit more resistance, I’m also not a huge fan of the soft touch finish of the main surface, but that could just be me. 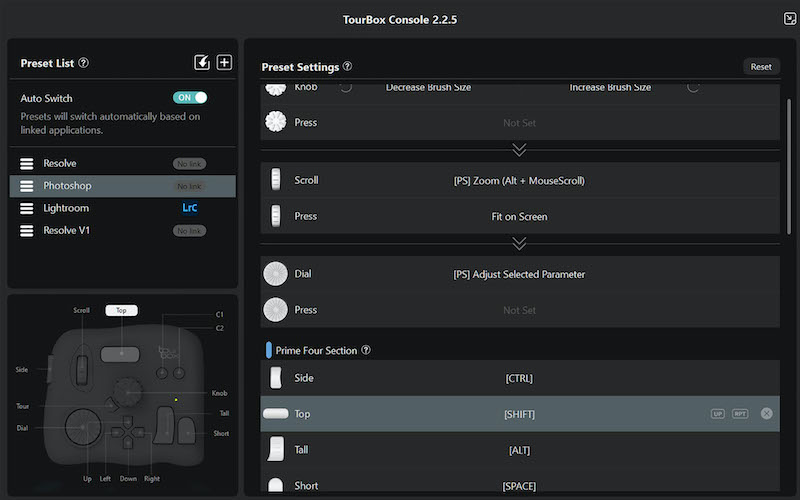 Where things do get interesting is with the associated app, this comes pre-loaded with shortcuts for Photoshop, Lightroom and Premiere Pro and can also be tweaked to fit your workflow. The TourBox community have also added their own presets for a lot of different software which can be downloaded and imported from the TourBox Tech website. There have been a lot of small additions and improvements to the way both the software and hardware interact over the past 12 months. It now includes M1 Mac compatibility, a slow mode for the dials which decreases sensitivity and an increase to the number of presets that can be stored – now 30.

The setup of the app is actually very good and for beginners it walks you through the various areas of the interface although some of the phraseology used could do with a bit of tidying up. Initially you also need to point the app at the software you want to control, after which the TourBox Console will automatically load and switch profiles when moving from Photoshop to Premiere Pro for example.

What I really like is the ability to combine button presses. You can extend the number of functions available to the 4 d-pad controls by using the top or side buttons in combination as modifier keys -meaning that these 4 buttons can now have 12 functions. In case you find yourself lost in remembering what all these functions are you can have an on screen HUD reminding you and this can be resized and relocated easily. There are currently more that 40 shortcuts available through either single button presses and wheel movements or combinations of the same.

The button combinations are limited though, for example you can’t use the small C1 or C2 buttons in combination with anything but the tall and short buttons. That said there’s probably enough functionality here to satisfy most users, any more combinations and you could run into a situation where you forget what they do. This is especially true if you’re using them to control a lot of different software.

The Neo and the Console app have seen some improvements over the last 12 months, the limitation for future development is probably now down to the current form factor. There’s a lot of competition in the control surface market for creators and let’s hope that this drives further innovation.