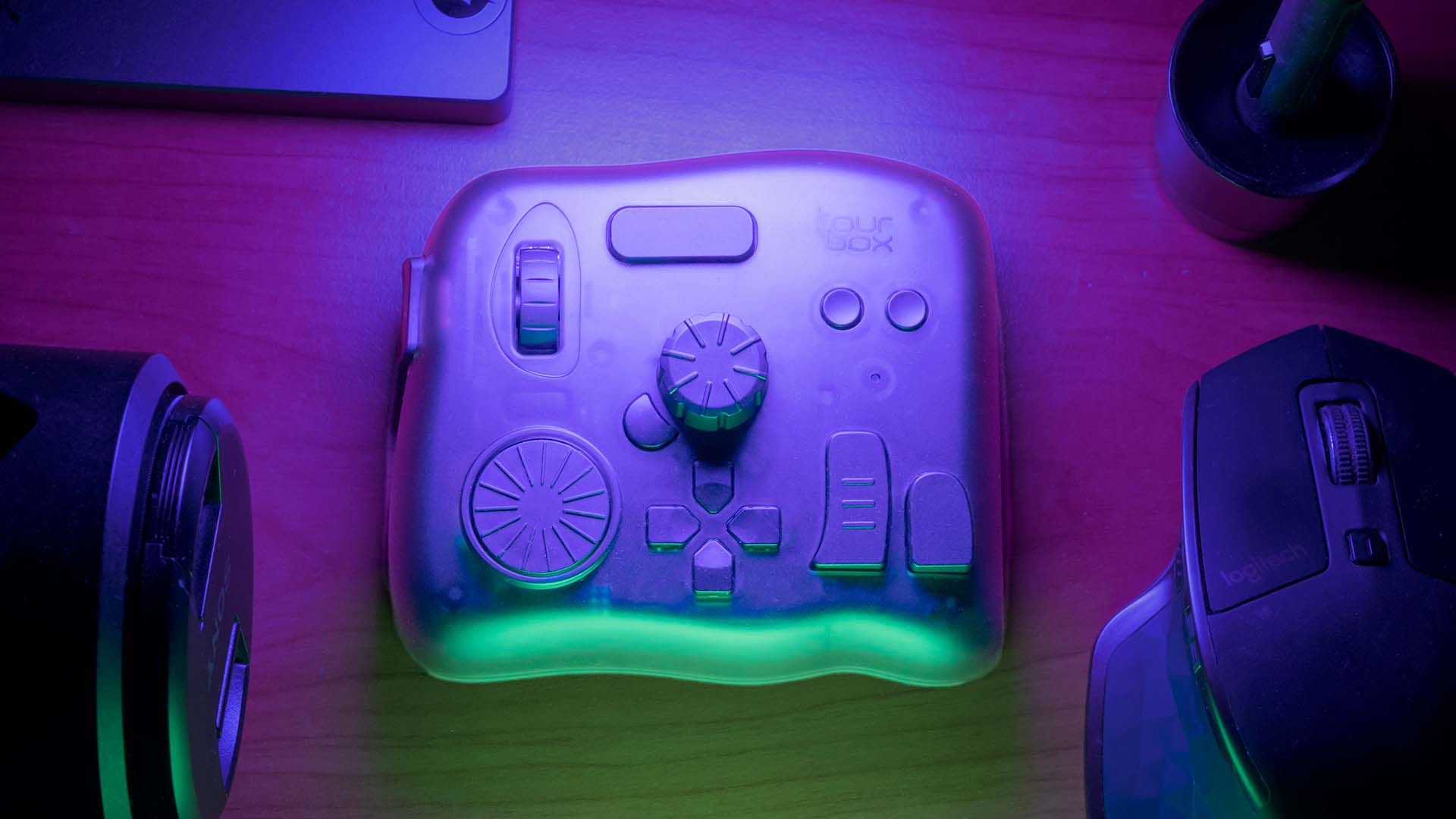 You might remember the Tourbox, the palm sized control surface?  I’ve covered it previously on RedShark and now after a successful Kickstarter campaign Tourtech are releasing a new version of the Tourbox, this time called The Elite priced from $178.

How does the Elite differ from the last version though, and is it worth upgrading?

There are now 3 different finishes, regular black, ivory/white and smoke grey/translucent. The latter version was the one that I had to test and it doesn’t have the soft touch finish like the older version. I welcome this as I’m not a fan of the feel, especially for something that I’m hands on with for hours at a time. The regular black and ivory versions also utilise a new anti UV coating to cut down on finger print marks.

Apart from that, the Elite is almost identical physically to the older models, with new version (sans batteries) only being 9g heavier at 375g. As for the controls? They’re all in the same place, but some have been updated slightly.

TourTech have made several key upgrades, first of which is the addition of Bluetooth. This brings the ability to connect to two host computers simultaneously and switch between them via the switch on the rear. An LED in the fascia changes colour to show you which machine has focus.

When using Bluetooth it’s powered by 2 x AA batteries instead of an internal rechargeable battery (USB-C is also available). Given the stated power draw (50mA) a set of batteries should last at least 40 hours, Tourtech state 2 months but it’s early days in my testing.

A new haptic feedback system has been added that’s activated when using any of the rotary controls. This is adjustable with two sensitivity settings, high and low as well as off. Although as I was using a pre-release version of the Elite and beta software, this feature hadn’t been finalised.

The hardware has evolved over the years since the 1st generation and things have changed. All the rotary controls have secondary push functions and some of the buttons feel slightly different. The most noticeable is that the right hand side button has been changed over, it’s moved from a short-throw microswitch to something with a larger range.

As for what you get for your money? In the box you get the Tourbox, some batteries and a bag for the Tourbox, although some Kickstarter reward levels (now sold out) also include a hard case and a USB-C cable as well. 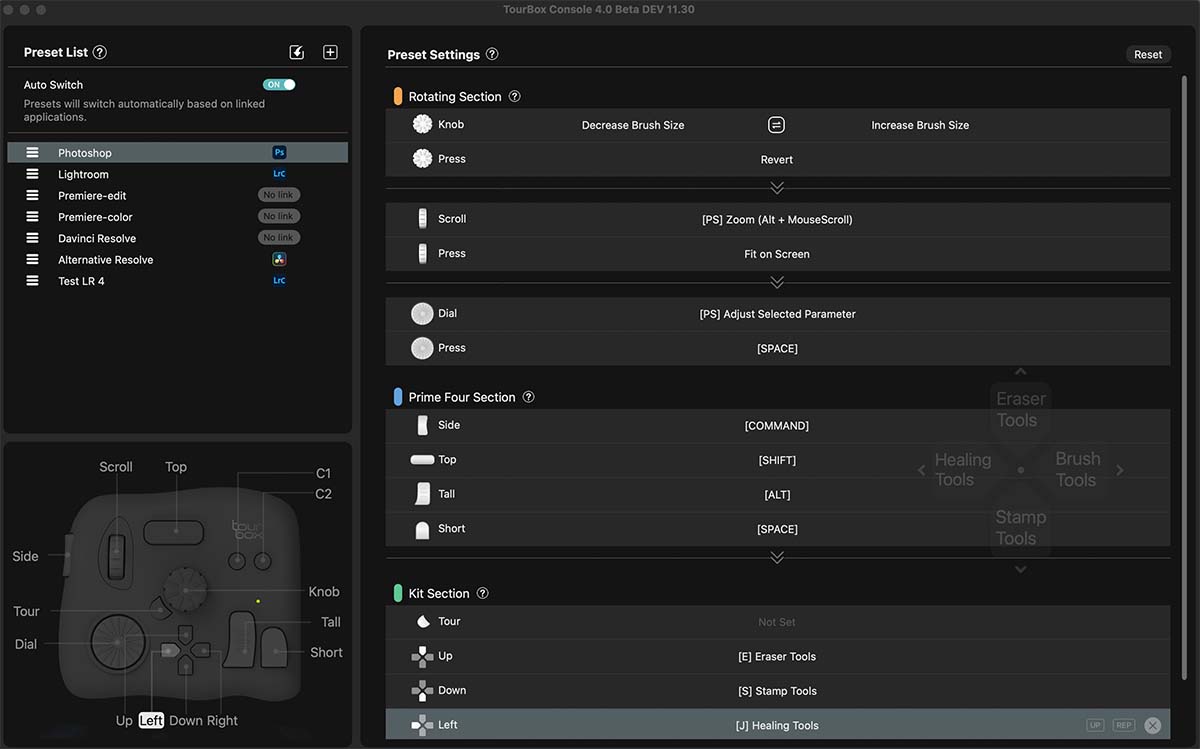 Not just the hardware

The key part of the product and any interface like this is how useful and configurable the software is. Over the years Tourtech have improved things a great deal, and now they take it a step further with the inclusion of macros.You can design your own set of instructions, to open files, move your mouse, set a delay and use a key combination. Although you can’t assign that action to your own Tourbox key combination, you are instead reliant on the key shortcuts that already exist in the console application.

That said there are… deep breath, 57 different key combinations available to bind single functions or macros to. If you plan to use all of them, good luck remembering which ones do which.

You can also set up a user definable menu to a button, rather like your own right-click on a mouse, although it’s not something I tested.

Something that hasn’t changed and that shouldn't be underestimated, is the time taken to set up control surfaces like these. They can save you time in the long run but need investment both in configuring them and then tweaking the functions as your needs evolve.

A work in progress

The first bug was that there was no appreciable difference between the high and low settings for the haptics. The other is that the feel of the feedback is limited to the body of the Tourbox itself; there is no feeling in any of the rotary controls, a bit of a disappointment. It’s early days for these pre-production versions and I’m told this is being worked on. It would also be an option for each of the rotary controls to have a slightly different haptic feel, at the moment they are all the same.

With each hardware iteration Tourtech have developed this product, each time adding new functions. Although it’s slightly worrying to see how the price has crept up over the years, by nearly $100.

There are some things that could do with a bit of tweaking, I’d still like to see some improvement to the feel of some of the controls, the main knob especially is too loose for my linking. I’d also like to see a hard case included as standard, the main control knob does seem rather vulnerable when being transported and the included soft bag does nothing really to protect it.

Oh and I know it’s meant to be used mainly by feel but some sort of subtle back light might be a good option, at least for the smoke grey version. I know black buttons on a black background with a black logo is very Hitch Hikers’ but…