Maybe there's going to be a Blu-Ray replacement after all! 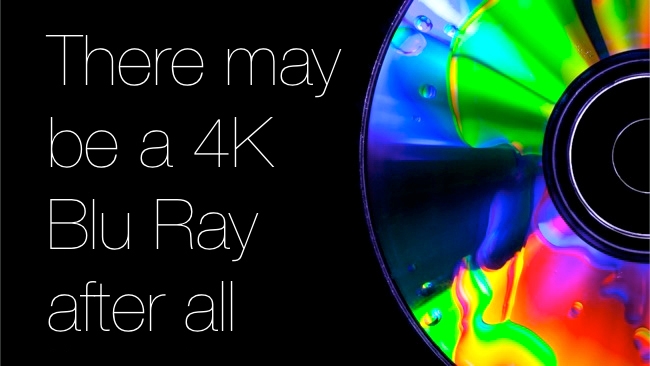 Maybe there's going to be a Blu-Ray replacement after all!

Without too much fanfare, Sony and Panasonic have signed a "basic" agreement to jointly develop a standard for professional-use next-generation optical disks

Now, there's as much in that sentence that says there won't be a new Blu Ray disk as that there will. Having a "basic" agreement to develop a "Standard" is not the same as having a product by a long shot, and in any case, this press release is about a "Professional-use" disk akin to XDCAM or Panasonic's memorably named "LB-DM9" optical disk storage devices.

But 300GB is 300GB, and while it's a lot less than the current trend in hard disks (and somewhat less, even, than the bigger end of the SSD spectrum), it is a lot for an optical drive, and although the first generation might be for professionals, if it turns out well, it is at least possible that it could be turned into a consumer format.

The biggest question is whether anyone will care. And what will decide that is exactly how long it takes to download a 4K movie. Assuming that we might see some sort of consumer product a year after the professional one is released, that would make it towards the end of 2016. By then many more people will have super high speed broadband, but that will still leave a huge section of the population relying on 80 year-old copper wire to deliver their 4K movies, and any of these viewers who have moved up to 4K (quite possibly a significant number) will be glad to see an optical disk format that doesn't mean they have to wait until the end of next week before they can watch a movie.

Our feeling is that Sony and Panasonic are doing the right thing by looking at larger optical disk formats, but with the vagueness of this roadmap, they're hedging their bets at this stage.

Read Sony's and Panasonic's press release in full on the next page.

Tokyo, Japan – July 29, 2013 – Sony Corporation (‘Sony’) and Panasonic Corporation (‘Panasonic’) today announced that they have signed a basic agreement with the objective of jointly developing a next-generation standard for professional-use optical discs, with the objective of expanding their archive business for long-term digital data storage. Both companies aim to improve their development efficiency based on the technologies held by each respective company, and will target the development of an optical disc with recording capacity of at least 300GB by the end of 2015. Going forward, Sony and Panasonic will continue to hold discussions regarding the specifications and other items relating to the development of this new standard.

Optical discs have excellent properties to protect them against the environment, such as dust-resistance and water-resistance, and can also withstand changes in temperature and humidity when stored. They also allow inter-generational compatibility between different formats, ensuring that data can continue to be read even as formats evolve. This makes them a robust medium for long-term storage of content. Both companies have previously developed products based on the Blu-ray format, leveraging the strengths of optical discs. However, both Sony and Panasonic recognized that optical discs will need to accommodate much larger volumes of storage in years to come given the expected future growth in the archive market, and responded by formulating this agreement.

Sony previously commercialized a file-based optical disc archive system in September, 2012. Based on optical disc technology that Sony cultivated for its XDCAM series of professional broadcasting products, this system houses twelve optical discs within a compact cartridge as a single, high-capacity storage solution. Each disc within the cartridge holds 25GB capacity, offering a total range of storage capacities from 300GB to 1.5TB.

In July this year, Panasonic launched its ‘LB-DM9 series’ of optical disc storage devices. This series uses a dedicated magazine of just 20.8mm thickness to house twelve 100GB optical discs. A maximum of 90 magazines can be stored, providing a total storage capacity of 180TB. In addition, Panasonic adopted a newly-developed changer system together with RAID technology to offer rapid data transfer performance of up to 216MB/s, while also ensuring high reliability by protecting data from unforeseen faults.

In recent years, there has been an increasing need for archive capabilities, not only from video production industries, such as motion pictures and broadcasting, but also from cloud data centers that handle increasingly large volumes of data following the evolution in network services. Both Sony and Panasonic have a proven track record in developing Blu-ray disc format technologies, and by actively promoting the adoption of a new standard for next-generation high-capacity optical discs, they intend to offer solutions that preserve valuable data for future generations.