Sony and The John Lennon Bus Tour: Spreading the love (and the FS700) 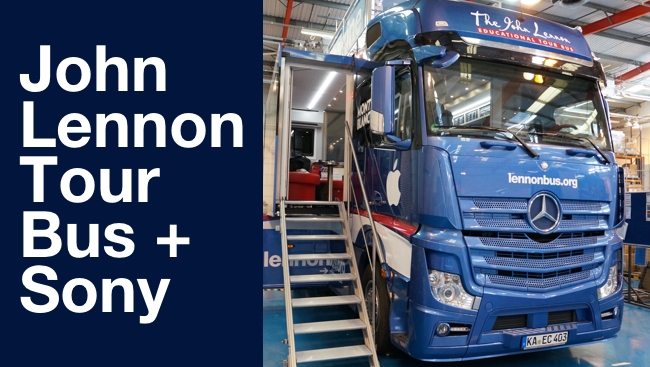 David Valjalo witnesses the birth of a crucial new collaboration that aims to evangelise high-end media production all over Europe. Exclusive interviews and access inside...

For once Liverpool's iconic waterfront was overshadowed by a force of nature greater than any concrete-grey British sky: John Lennon. The logo for The John Lennon Tour Bus was peppered all over the Museum Of Liverpool on Wednesday, from visitor's badges to myriad screens and poster displays, promoting a venture that intends to generate and cultivate the next generation of tech-savvy engineers and creatives on a European tour kicking off this month.

The look on visitor's faces was priceless as they confronted a packed lobby of press and professional camera and media reps, and the look when they saw Yoko Ono? Seeing really was believing.

Framed by the striking porcelain-white geometry of the relatively young museum, the bus itself cut a towering, intimidating figure. Onboard, however, it's something that's both hard to comprehend, easy to fall in love with and as stunning in its practicality as the specs themselves. Compact but roomy enough to host a full five-piece rock band (plus groupies), the technical details are as numerous as the not-for-profit bus' sponsors. There are the usual suspects: MacBooks, Gibson guitars and... Sony 3D monitors? Sony's presence in the project is strong, and with good reason, as Bill Drummond, strategic marketing manager for Sony Digital, told me: "We've been working with the bus since 1998, really. The whole ethos behind it is to try and engage with students, young people - as Yoko said it's very much about keeping John's memory alive and using music and media production [to do that]." 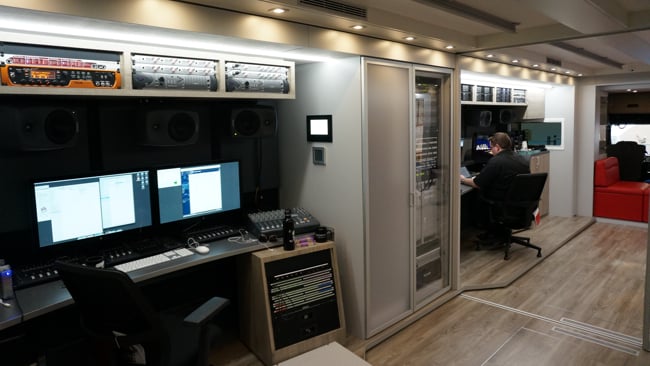 As a concept The John Lennon Tour Bus isn't quite a brand new, unproven venture. In fact, it's been touring the US for fifteen years and engaging aspiring college students and media professionals with its armoury of production kit. What's new this time around is that the European bus was built and designed by Sony, right here in the UK. "We'd had a lot to do with this charity and they came to us and said they were taking the bus to Europe and we've been working with them for about six months now to bring this to fruition," explains Drummond. "We've got a strange sort of relationship with The John Lennon Bus Tour because we're not just sponsors and kit-providers but we also designed and integrated the truck for them as well. The bus itself was built over the last six months in Basingstoke in our system integration group."
The Lennon Bus also plays a role in Sony's strategy to move more boldly and broadly into the sphere of mainstream education, as evidenced by the recent launch of a new CRM education program for Europe. It also involves discounted kit for colleges and universities - a loss-leader for the brand but one Drummond assures me is worth it: "Why is that important? Obviously it costs us money but it's important for students to get trained on industry-relevant kit, value for money is vital for a college and university. The Lennon Bus is hoping to get people interested in broadcast media and business so we hope to establish links with the broadcast media industry and colleges and universities." 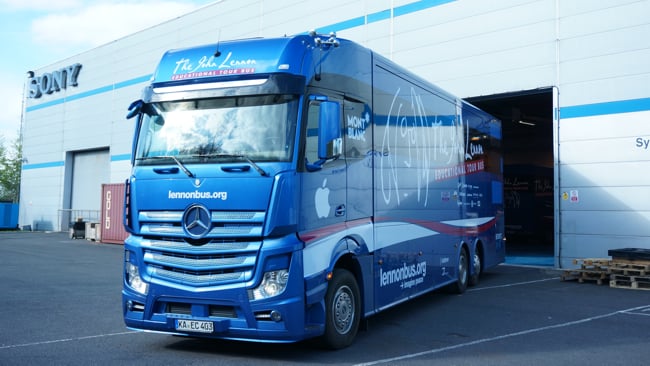 The Sony equipment on board is a mix of professional and domestic equipment. "The nice thing about it," explains Drummond, "is we've supplied some NEX Series cameras which is basically a mirror-less compact system but we've supplied some Alpha 99's as well, and some NEX FS700's; our high-end cinema camera that's been used in TV, documentaries... The nice thing about all those is they all use the same lens so there's real flexibility in what the students can use, whether its shooting stills or working more cinematically."

Having glanced those Sony 3D monitors onboard, I ask Drummond if 3D remains a big part of Sony's vision for the future of visual entertainment and capture. "3D is a new form of creative expression... in terms of the future of broadcasting? Many people are talking about 4K now and the FS700, of course, is 4K-upgradeable and we've launched the new IFR5 adapter to integrate with an R5 recorder which is 4K. The FS700 does give the [John Lennon Tour] bus some longevity because it's very easy for us to [later] upgrade it to 4K."

Jeff Sobel, chief engineer of the John Lennon Bus backs up Drummond's assertion that interchangeable lenses make all the difference. "The quality of the image [of the FS700] was the most important thing [for us], but also the versatility. We looked for camera systems with interchangeable lenses. Honestly, the cameras are really the most essential thing that we've got [onboard] - camera selection is the key thing for us. Having cameras that are the best in quality but also very manageable, configurable... because we do a lot of different things - video projects, promo-pieces, interviews... we need something that can cover all those bases."

The John Lennon Bus Tour has been travelling the US for over fifteen years now, successfully introducing new talent to cutting-edge equipment and modes of production that might otherwise be out of their grasp, but it was on Wednesday in John Lennon's hometown that it really felt like the maiden voyage of this very modern Magical Mystery Tour.
For more information on the tour, visit:
http://www.lennonbus.org/