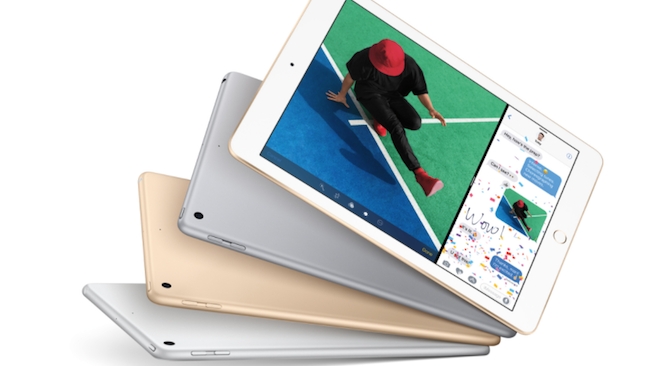 Slightly thicker but a lot cheaper: the new iPad

There's been a lot of knocking of Cupertino here recently, so here’s a nice, positive story for you all and the unveiling of a new, entry-level iPad that now helps you access the iOS world for a mere $329.

The new 9.7in model goes back to basics by being called simply ‘iPad’ and replaces the iPad Air 2. It’s had the chip upgrade that you'd expect, replacing the old A8X with the 64-bit A9 processor that first debuted in the iPhone 6S, and features a Retina screen.

The WiFi-only base model has a meagre 32GB storage, which isn’t going to get you very far but seems to be becoming increasingly standard for entry-level devices as more and more services switch to the cloud. There’s also a 128GB model that will set you back $429, while WiFi and Cellular starts at $459 with the 32GB unit and finishes up at the $559 with the 128GB model.

While an expansion of the iPad Pro line is expected later in the year, for now, it’s being left alone. Apart from cost, the main difference between the new model and the existing top line are you need the Pro to get access to the Apple Pencil and the Rose Gold option. It also has a more powerful A9X processor.

You’ll notice a difference in size as well, the new iPad being the same dimensions as the original iPad Air, making it 7.5mm think instead of the Air 2’s svelte 6.1mm. It’s also a touch heavier than its predecessor. The iPad Mini 2, meanwhile, seems to have disappeared off the radar, leaving only the Mini 4 occupying the 7.9in ground.

UK pricing for the new iPad starts at £339, currency devaluations post-Brexit meaning we’re not even getting the one-to-one dollar exchange rate this side of the pond anymore.

Other releases from the company today include a special, red aluminium cased iPhone 7 / + as part of its partnership with HIV/AIDS charity (RED), and Clips, an app due in April that “lets users create multi-clip videos on iPhone or iPad without timelines, tracks or complicated editing tools.” And which neatly allows us to circle back to the current arguments that Apple is chasing the consumer and neglecting the Pro user once more.