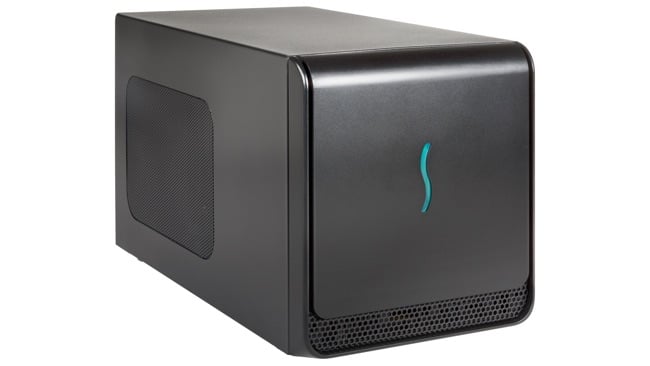 The eGFX Breakaway Box isn’t meant as a replacement for high-end workflows. It’s a more like a portable solution that boosts graphics performance when you’re away from the desktop. On-set colourists, DITs, editors, audio producers and digital creatives working with VR in the field, who can harness the plug-and-play GPU acceleration offered by the eGFX Breakaway Box, will love it.

With the wider adoption of Thunderbolt 3 on PC laptops and desktop systems, Sonnet is gaining wider appeal. Whilst recently updating its Echo Express, SF3 card readers and 10GbE range, the most interesting news from Sonnet’s stand at BVE last week was the announcement of the soon-to-be-released eGFX Breakaway Box.

This chassis supports every Thunderbolt 3-compatible PCIe card regardless of length or height. Nothing new so far you say, but at NAB Sonnet says it will unveil its Thunderbolt 3-to-PCIe expansion solution designed specifically for bandwidth-intensive graphics applications. Has that piqued your interest?

This is the first Sonnet chassis that (officially) supports GPU cards. There are plenty of homebrew videos on YouTube demonstrating that external GPU is of interest to users, but at Thunderbolt 2 speeds this was perhaps a bottleneck too far for Pro customers. However, the idea planted a seed. Attentive as ever to our needs and pains, Sonnet decided that the 40Gbps available to Thunderbolt 3, which opens up 2750 MB/s of PCI Express bandwidth, finally made this a viable resource worth investing in.

External PCIe expansion solutions have been around for a long time, allowing multiple GPUs and PCIe I/O cards to be housed outside of the main system when internal slots get congested. The eGFX Breakaway Box isn’t meant as a replacement for these high-end workflows. It’s a more like a portable solution that boosts graphics performance when you’re away from the desktop by giving users the ability to connect a high-performance GPU or other PCIe card to a Thunderbolt 3-equipped, eGFX-compatible notebook, an all-in-one, or another small form factor computer.

Unlike existing products which have aesthetics aimed squarely at the gaming market, such as the ROG XG Station 2 from ASUS, the new Sonnet system may have broader appeal to Pro users not least because it’s the coolest and quietest external GPU box on the market. It achieves that feat with a built-in, variable-speed, temperature-controlled fan. Effectively offering desktop grunt in a portable form factor, there are obvious benefits. On-set colourists, DITs, editors, audio producers and digital creatives working with VR in the field, who can harness the plug-and-play GPU acceleration offered by the eGFX Breakaway Box, will love it. But let’s not sideline the Gamers out there; they will also experience desktop level performance on a modest laptop.

We’ve had feedback that makes us hope it shouldn’t be too long before Sonnet expands the range to allow two or more of these double-width cards to be housed in a chassis. With the recent launch of the GeForce 1080 Ti and the sooner than anticipated Titan X refresh using GDDR6 ‘Volta’ architecture, it shouldn’t be. As a first offering, the eGFX Breakaway Box is a welcome and affordable addition to the family. We’ll be back with benchmark scores following the official launch at NAB.