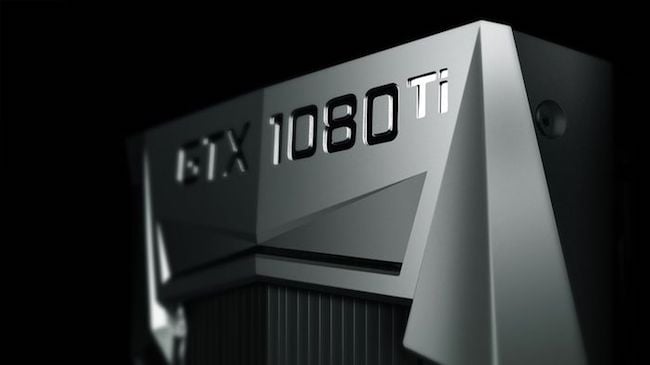 A lot of GPU for not that much money (relatively speaking)

Nvidia’s new $700 GTX 1080 Ti, unveiled at GDC last week, is billed as the Ultimate GeForce GPU and promises performance 35% faster than the GTX 1080. And that is impressively speedy!

Nvidia has released a new GPU card — Founder’s Editions are available direct now — and it is big news for those who need high end GPU performance for their video applications. The new card, the GTX 1080 Ti, promises Titan-X type performance for about half the price and uses the same GP102 GPU as the Titan-X with a faster memory bus.

At $699 compared to the Titan-X at $1200, it is almost half the price for comparable performance, so it seems worth it to save some money and get the cheaper card or even to get two of the cheaper card if your application and motherboard support multiple graphics cards.

Of course there are cheaper options if you are looking to make a cost saving at the expense of performance such as the older GTX 1080 (watch out for the similar name, it's a different card with a different GPU) and the GTX 1070, but the GTX 1080 Ti is expected to give very similar performance to the Titan-X for a much cheaper price, certainly the gaming benchmarks for the card hold this up. We will have to wait and see how the card holds up in video applications but I would expect to see similar results.

The Nvidia GTX 1080 Ti will be the last card to make use of Nvidia's Pascal architecture. Given that this card competes so strongly with the top of the range Titan-X card, I suspect this means there will be a new card to replace the Titan-X at the high-end in the near future.

I'm expecting a new card to arrive with NVIDIA's new Volta architecture which will be something utterly groundbreaking and will once more set a new standard for high end GPU's but we will have to wait and see.

GDC 2017 -- Crowning its award-winning lineup of Pascal™ architecture-based GPUs, NVIDIA today unveiled its fastest gaming GPU ever -- the GeForce® GTX 1080 Ti.
Packed with extreme gaming horsepower, the GeForce GTX 1080 Ti delivers up to 35 percent more performance of the GTX 1080 and comes with 11GB of next-generation GDDR5X memory, running at a staggering 11Gbps, for the ultimate in memory bandwidth and gaming prowess.
GTX 1080 Ti graphics cards, including the NVIDIA Founders Edition, will be available worldwide from NVIDIA GeForce partners beginning March 10, and starting at $699.
The Ultimate GeForce, with the Ultimate Specs
NVIDIA designed the GeForce GTX 1080 Ti to handle the graphical demands of 4K and 5K gaming, DX12, HDR and immersive VR. It incorporates:
• Massive Features for Massive Performance: The GTX 1080 Ti includes 3,584 NVIDIA® CUDA® cores and a massive 11GB frame buffer running at an unheard of 11Gbps. It delivers up to 35 percent faster performance than the GeForce GTX 1080 and up to 78 percent faster performance than the GTX 1070.(1) The GTX 1080 Ti is even faster than the NVIDIA TITAN X Pascal, its $1,200 big brother that was designed for deep learning and artificial intelligence.
• Next-Gen Memory Architecture: GTX 1080 Ti is the world's first GPU to feature Micron's next-gen G5X memory. 11GB of G5X memory running a blazing 11Gbps quad data rate delivers the most effective memory bandwidth of any modern gaming GPU. And it still has plenty of headroom for overclocking.
• Advanced FinFET Process: The GTX 1080 Ti is manufactured on the industry's cutting-edge FinFET process. Its 12 billion transistors deliver a dramatic increase in performance and efficiency over previous-generation products.
• Meticulous Craftsmanship: The GTX 1080 Ti runs as cool as it looks due to superior heat dissipation from a new high-airflow thermal solution with vapor chamber cooling, 2x the airflow area and a power architecture featuring a seven-phase power design with 14 high-efficiency dualFETs.
• Support for Advanced Graphics Technologies: 4K, VR, NVIDIA G-SYNC™ HDR and NVIDIA GameWorks™ offer interactive, cinematic experiences accompanied by incredibly smooth gameplay.
- See more at: http://nvidianews.nvidia.com/news/nvidia-introduces-the-beastly-geforce-gtx-1080-ti-fastest-gaming-gpu-ever#sthash.TPQYmzHl.dpuf