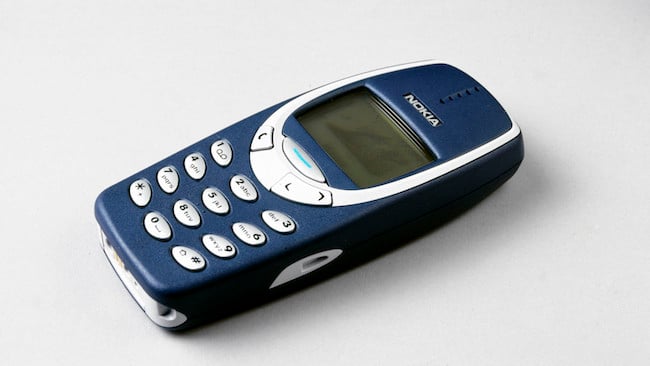 The Nokia 3110: probably the best mobile phone ever made and due for a relaunch 17 years after the original at MWC 2017

The 5G future will take shape in Barcelona next week as MWC sees a show that was once dedicated to the humble mobile phone expand its remit to cover the IoT, virtual reality, autonomous vehicles and pretty much anything else that you can imagine coming down the pipe in the next decade.

One of the defining images of last year was Facebook founder Mark Zuckerberg’s appearance at a Samsung press event strolling past ranks of journalists with heads encased in VR head gear looking for the all the world like he owns it (and us).

While this says quite a bit about The Matrix-style rabbit hole we are in danger of going down (and which Steven Spielberg’s 2017 movie adaptation of Ernest Cline’s novel Ready Player One will fuel), it also put Mobile World Congress on the global stage as a venue which forecasts the future.

Underpinning all this, and arguably the unifying topic in Barcelona next week, is the highly anticipated fifth generation communications network, now officially and unsurprisingly dubbed 5G.

The 5G shape of things to come

There is, however, no official definition yet of what makes 5G, but it is taking shape. The ITU will ratify the standard in 2020, with a lot of pre-standard trials and momentum in place as telcos and handset operators jostle for positioning. Chinese handset maker Huawei has already promised its first phase of 5G commercial products will be available in 2018 to support the first operator deployments. Nokia and Ericsson count more than 75 5G projects between them alone.

Cisco’s latest Mobile Visual Networking Index forecasts that by 2021, 5G will account for 0.2% of connections (25 million), but 1.5% of total traffic. Cisco estimates that by 2021 a 5G connection will generate nearly 30GB per month, which is 4.7 times more traffic than the average 4G connection and 10.7 times more traffic than the average 3G connection. At the same time, industrial, healthcare and transportation sectors are especially on 5G’s opportunity radar. According to Ericsson, 94% of executives from eight major industries rate next generation mobile networks as a top strategic priority.

The industry is trying to put in place the technology that can handle this exponential traffic growth that will only increase with the IoT and other applications, such as AR/VR.

Ericsson, for example, is introducing a 5G platform for first movers into 5G. The platform comprises the 5G core, radio and transport portfolios, together with digital support systems, transformation services and security. This is ahead of what Ericsson expects to be a $582 billion global market opportunity, “as telecom operators leverage 5G technology for industry digitalisation”.

Nokia is among those aiming to commercialise 5G during the next year though the business case is hard to pin down – 5G could mean everything to anybody so some compromise will surely have to be reached.

Telcos, like BT for example, are looking seriously at using fixed 5G wireless technology to support pay-TV services, according to a recent report from Strategy Analytics, especially to broadband starved rural areas.

While extreme low latency and larger bandwidth make instant 4K video broadcasts possible, other companies like Huawei are positioning 5G as a way to connect a whole manner of sensors and gadgets in and around the home with superfast broadband.

Strategy Analytics director of service provider analytics, Sue Rudd is dismissive: “Everyone is looking for a business case for 5G. It’s not the Internet of Things and it’s not connected cars.”

One of the talking points will be a roll back on what seems like a neat jump from 4G straight to 5G. Instead it will be argued that 5G and 4G and its upgraded variant 4G LTE are designed to co-exist. Selling a 4.5G upgrade to customers may prove a sticking point.

Mobile data traffic is set to grow 15x by the end of 2017 alone with video the main culprit. Looking ahead to high-profile events such as the 2018 Football World Cup in Russia, operators need to be able to meet customer expectations, profitably. The latest techniques in optimisation and compression and technologies like UHD and LTE Broadcast are discussed off the showfloor by Eric Black, CTO Digital, NBC Sports and Matt Stagg, EE’s Head of Mobile Video & Content.

An issue for which 5G is again the saviour is getting enough capacity in the network in order to effectively process and deliver VR content. On hand to explore the issues are experts from Google’s VR operation, VR developer and producer Jaunt and LucasFilm’s sound division THX.

There will be actual mobile phone launches in town too. Many of these are expected to feature 4K resolution screens which are a necessary piece in the jigsaw required to build a high quality virtual reality experience for consumers. Among them are likely to be new versions of Sony’s Xperia line and the latest LG handset called G6.

After all the issues with its fire prone Note 7, Samsung is expected to focus on the new Galaxy Tab S3 tablet at MWC, though it may also debut a foldable phone, a technology which it trailed last year.

As has been widely flagged, its back to the future for Nokia. With the brand’s phone division now in the hands of HMD Global, there are strong hints it will revive the iconic 3310. Released in 2000, the original 3310 was sold 126 million times worldwide, making it the world's best-selling mobile phone. It’s small, tough, has long battery life and you’re in no danger of smashing its screen – unlike many of the issues which bug today’s mega phones.

While the heads of mobile and traditional media networks - AT&T, Verizon, Orange, Telefonica, Liberty Global, Discovery, Vivendi - are present as expected, what’s more notable are the keynotes from content disruptors. They include Netflix chief Reed Hastings who never minces his words, the founder of youth media brand Vice, Shane Smith – also someone never shy of sticking it to old media – and Alejandro Agag the CEO of electric and social media- powered Formula E.

Perhaps most intriguingly is John Hanke, the CEO of Niantic.  Never heard of them? Niantic developed and released the global AR gaming phenomenon Pokemon GO and while the frenzy around it may have subsided, Hanke will surely have ideas as to where the next AR, VR or Mixed Reality entertainment format will come from.

Nokia says it will unveil its vision of the global nervous system – which it describes as “a seamless web of interconnected intelligence that underpins our digital lives”. This “Future X network” underpins Nokia’s idea for the Internet of Things, Cloud, Ultra-broadband, and immersive technologies.

According to one conference session description we are at the beginning of the Fourth Industrial Revolution that will “fundamentally alter the way we interact with each other, our working environment, companies, brands and governments. In its scale, scope, and complexity, the transformation will be unprecedented.”

Mobile has connected nearly 5 billion people with unprecedented processing power, storage capacity, and access to knowledge, but for many companies at MWC this is just the start. Usable big data, artificial intelligence, robotics, the IoT, autonomous vehicles, and even quantum computing will all be on the agenda this year.

It’s going to be one to watch.