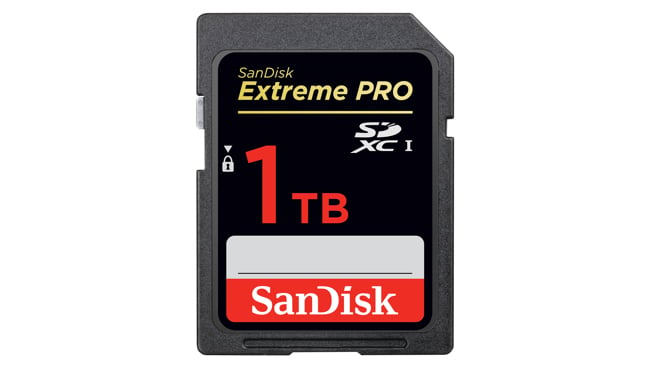 A lot of information in a very small space

One Terabyte in a tiny SD-sized package? That’s extremely impressive. Unfortunately the headline pretty much gives you all the information we have.

The press release announcing this is at the bottom of the page, but is perhaps more noticeable for the fact that the one solid piece of information in there is WD reminding us that it now owns SanDisk rather than anything else.

You will note there is no mention of the fabrication process, the type of NAND flash cells and whether or not SanDisk is using 3D NAND in the 1TB model. Neither is there any talk of read and write speeds so it would be a fool’s game to speculate whether this will be a U1, U3, V30, V60 or V90 rated SDXC card, however that has never held us back.

The current SanDisk Extreme Pro is rated at 95MB/sec and has Class 10 and U3 markings. The new 1TB card is unlikely to use faster NAND than the 512GB, and may well use slower technology as a way to cram all those Gigabytes in such a tiny package. If so, it is unlikely the new 1TB card will be rated faster than U3 which means it is unlikely to be much use for video at a resolution higher than 4K. While the 1TB card will be able to hold 6K or 8K video files we very much doubt it will be used to record them in the first place.

Naturally we asked a SanDisk spokesperson for more information: “The two obvious questions are, do you have a guide when the 1TB model might go on sale and can you estimate the price? Even a price relative to the existing 512GB would be handy.”

And naturally they declined to give a useful answer: “The 1TB SDXC card is currently a prototype. We closely monitor industry trends and demands, and introduce new products accordingly, thus the pricing depends on market conditions at the time it’s released.”

The 512GB SDXC card currently sells for £300 so it is tempting to estimate the 1TB will sell for £750. This may well be true but we have to hope it comes in a lower price and the rest of the product stack shuffles downwards.

Time will tell, but give it a couple of years when the 2TB model is announced and our current fistful of 64GB SDXC cards is going to look pretty darn paltry.

Photokina, Cologne, Germany, Sept. 20, 2016 – Western Digital Corporation (NASDAQ: WDC), a global storage technology and solutions leader, today unveiled its SanDisk 1TB (Terabyte) SDXC card prototype at the world's leading trade fair for photo and video professionals. With increasing demand for high resolution content, such as 4K and 8K, the company continues to push the boundaries of technology with solutions that support the exponential growth of data-intensive production demands.
“Showcasing the most advanced imaging technologies is truly exciting for us,” said Dinesh Bahal, vice president, product management, Content Solutions Business Unit, Western Digital. “Sixteen years ago we introduced the first SanDisk 64MB SD card and today we are enabling capacities of 1TB. Over the years our goal has remained the same; continue to innovate and set the pace for the imaging industry. The SanDisk 1TB SD card prototype represents another significant achievement as growth of high-resolution content and capacity-intensive applications such as virtual reality, video surveillance and 360 video, are progressing at astounding rates.”
Since the introduction of the record-breaking 512GB SanDisk Extreme Pro SDXC UHS-I Memory Card at Photokina 2014, Western Digital has proven it can nearly double the capacity in the same SD card form factor using proprietary technology. Higher capacity cards expand the possibilities for professional videographers and photographers, giving them even greater ability to create more of the highest quality content, without the interruption of changing cards.
“Just a few short years ago the idea of a 1TB capacity point in an SD card seemed so futuristic – it’s amazing that we’re now at the point where it’s becoming a reality. With the growing demand for applications like VR, we can certainly use 1TB when we’re out shooting continuous high-quality video. High-capacity cards allow us to capture more without interruption, streamlining our workflow, and eliminating the worry that we may miss a moment because we have to stop to swap out cards,” said Sam Nicholson, CEO of Stargate Studios and member of the American Society of Cinematographers.