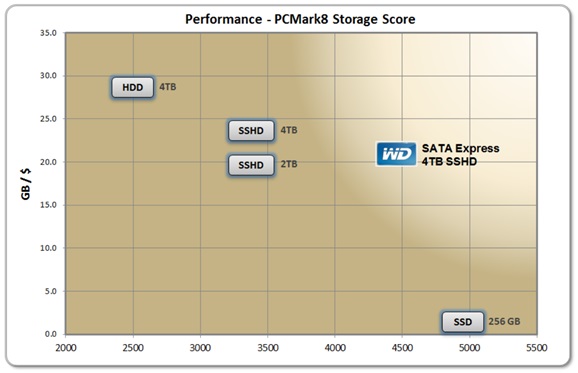 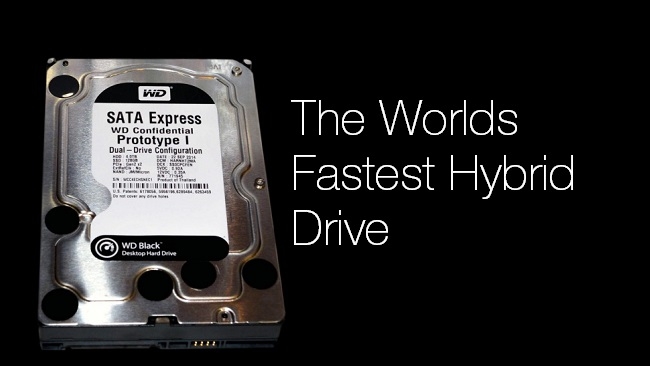 Although SSD drives have the edge when it comes to speed they are still quite expensive compared to Hard Drives. WD have just demonstrated a Hybrid drive that has the best of both worlds

Just before CES 2015, WD demonstrated a prototype Hybrid drive, using a 4TB hard drive paired with a SSD drive of 64GB capacity, that set new records in terms of speed and affordability.

The WD prototype was able to outperform other hybrid solutions and was nearly as fast as a pure SSD drive, whilst coming in at a much lower cost per GB 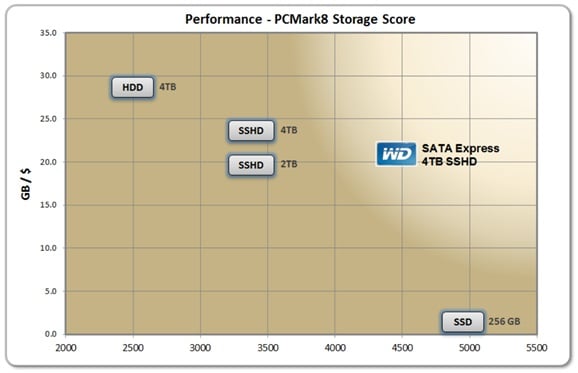 The prototype drive was paired with commercially available motherbaords from ASRock and Gigabyte and used a SATA express PCI-e connection to achieve speeds of up to 10Gb/s. The drive is expected to be available later this year at a price of around $200

You can read the full press release after the break

PCMark8 benchmark
PCMark8 benchmark data collected on Asus Z97-A platform, core i5 3.4GHz, 16GB DRAM
GB/$ calculations based on Dec14 retail price sampling
"WD is committed to working with the industry to push the boundaries of what you might expect from a traditional hard drive," said Matt Rutledge, senior vice president, Storage Technology, WD. "By moving to PCI Express, the industry marries the world's most popular storage bus with the world's most popular computer bus. This union provides a solid growth path to innovate new capability, while preserving the ability to plug legacy SATA drives into new SATA Express based computers."

"WD's culture is one of strong collaboration with industry partners in a rapidly changing environment," said Gary Meister, senior vice president of engineering, WD. "We see the industry moving toward simplification of the overall PC subsystem to a single storage bus based around the PCIe protocol. In this demo, we placed a hard drive, flash NAND and SATAe technology into one package, freeing up one slot in the system and simplifying how our customers could create and maintain such an advanced storage solution. When our customers ask us to move to the next storage bus, we will have done all the necessary work to be ready to support the move."

"ASRock is delighted to show speeds of almost 10 Gbit-per-second when RAID striped off of two WD prototype drives," said James Lee, vice president of ASRock sales and marketing of ASRock. "ASRock is on the forefront of creating new systems and architectures that break through classical bottlenecks."

"Gigabyte demonstration will show how a WD prototype SATAe drive enables world class gaming experience," said Jackson Hsu, product planning division manager of Gigabyte. "Included in our demonstration is work we have done with WD to make the combination of a hard disk drive and a flash subsystem look like a single volume to the end user. This allows the power of having separate devices in a system along with the convenience of having only a single drive to manage."