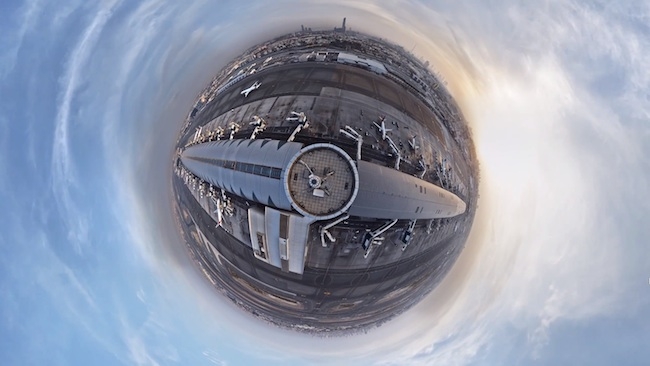 dubai360.com promises to enable viewers to explore Dubai from anywhere in the world utilising state of the art 360 degree multimedia. The sneak preview — a ‘Little Planet’ video taken with four Canon 1Dxs from the top of the control tower at Dubai International Airport — already has our attention.

Shot over a 30 hour period, the timelapse video shows over 1000 planes landing, taking off, and taxiing at the airport. It was captured using four synchronised Canon 1Dx cameras mounted with Canon EF 8-15mm f4 L USM fisheye zooms. Over 88,000 photographs were taken over the course of the 30 hours of shooting — one ‘set’ being taken every 5 seconds — with the results then stitched into 22,000 panoramas using Kolor Autopano Video.

One thing that is very cool is that Terminal 3 at the airport acts as an hour hand on a 24 hour clock, with midnight at the top and midday at the bottom, so you can tell exactly what time every single frame was taken. The full-moon is captured, even what looks bright enough to be a planet in the lower right. A tiny planet in a tiny planet…