Is this the ultimate timelapse movie? 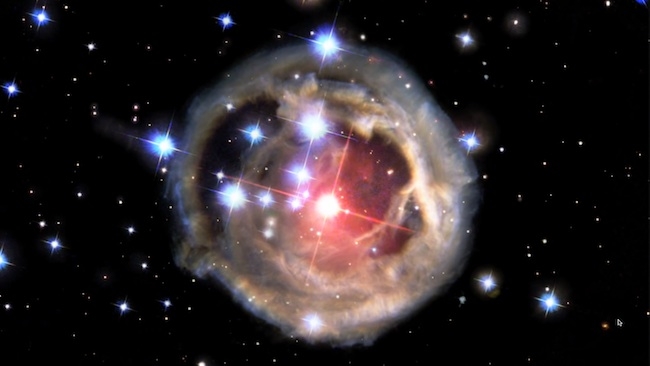 If you're going to do timelapse photography, you might as well use the best instrument available and chose an interesting subject. How about observing an exploding star through the Hubble Space Telescope over a four year period?

This particular video morphs images take by Hubble of the unusual variable red star V838 Monocerotis over a four year period following an eruption in 2002 which saw it temporarily increase in brightness to become 600,000 times more luminous than the Sun (and a maximum visual magnitude of 6.75).

The result is a 'light echo' that illuminates the interstellar dust clouds surrounding it. Because the light reflected from the cloud takes a longer path it arrives later, producing a vision of expanding rings of light around the object in question.

V838 Mon is around 20,000 light years away. The explosion was initially thought to be a typical nova, but subsequent and rapid brightenings in the infrared spectrum were unlike anything previously recorded. The reason for the outburst is now unclear, though several theories have been put forward including the merger of a binary star or the swallowing of gas giant planets. Nobody has yet to mention giant mutant star goats.