Red's latest addition is an add-on camera control panel that provides all the basic controls for a camera assistant while also looking the part too.

Red has announced the Switchblade-M, a cool little camera control panel that attaches to the camera body where the side handle normally resides to give your Red camera more of that Arri Alexa/Sony f5/f55 look. Of course it also has a more practical purpose in providing all the basic controls that a camera assistant might want to play with in a nice clear and clean layout, but there is something to be said for the psychological impact of a camera that exudes the right look as well.

It features four customisable presets: A, B, C, D as you can see in the picture and apparently allows full control over the DSMC menu options. Red describes the panel as providing “full menu control while optimising your camera for size and weight savings”. On the downside it does replace the side handle which means there is no way to attach Red volts but there are plenty of other power options and it makes the camera setup more slimline.

The cost is $950 but there is no shipping date yet despite cries from the Red faithful of “I must have this NOW!” It’s currently expected around Fall 2014 sometime.

Red is also releasing a device that looks like it ought to be called the Red Switchblade but isn’t! It’s a 'swiss army knife-like' device called The Sidewinder that provides all the tools you need to undo the bolts you might encounter on a Red manufactured camera. There are also little threaded holes in the sides of it where you can screw in spare bolts for safe keeping too.

Price is $28 and it is described as “coming soon”. 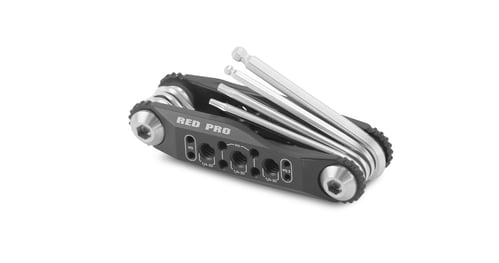