Sebastian Pichelhofer at from Apertus has just told us that the second Alpha prototype has been made and is working well.

Don't expect to see any new heights in industrial design with this latest iteration - it's strictly to prove the concept and to work towards the final design. What is different about this version is that a full-quality sensor is being used (as opposed to a damaged one where it didn't matter so much if they blew it up while experimenting with it).

You can see the details in Sebastian's blog here 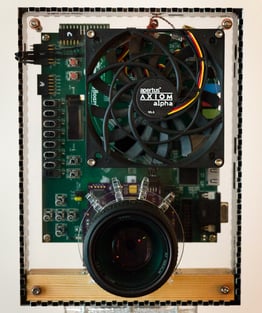 One thing we really like is seeing the large fan on the device. As Sebastian explains, this isn't because it needs a giant cooling system, but because the bigger the fan, the slower it has to rotate to shift the same amount of air - so that means the system will be kept quiet.

You'd normally expect cooling to be even more efficient when it's in a proper housing as well, as the air can be ducted with more precision.

But, meanwhile, we're as excited as ever to see this project, which will be the first viable open source modular camera system, progress to the point where we can all get involved.

And that's when the project will really take off. At this stage, it really needs the focused attention of a relatively few individuals, but all the work put into it now will pay off later when the project is released for open development, which will be on the basis of the stable, flexible platform that Sebastian and his team are building now.

The fact that it's so open and that we can see how it's going at every stage bodes well for the future of this project.

Read: This could be the biggest advance in camera design for a decade