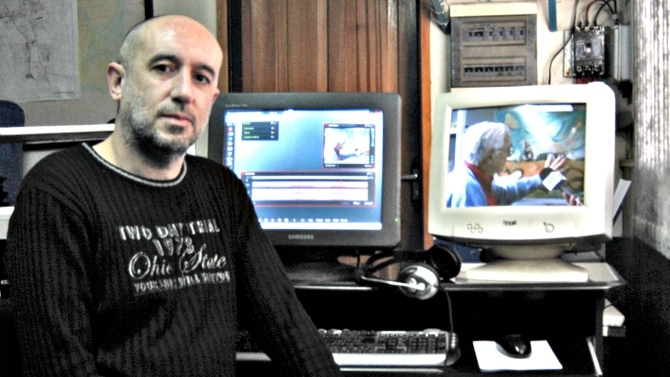 Uruguay: Lightworks user Fran De Souza's tells us what it's like to broadcast from a local TV station in this small country - sandwiched between Brazil and Argentina

I work as a video editor (among other tasks) in a small TV station from Rivera, Uruguay. Although I was always interested in audiovisual production, my introduction to the world of TV and video was almost by accident. In 1995, one of my best friends had begun to produce a sports show on cable TV, and asked me to help him in the design of a logo. At the end of that day I had already recorded a voiceover for a report, then I became the host of the show for a few days (but... well, that was not really for me), and since I had some previous experience with photography, he put a camera on my shoulder. The editing room was a natural step after a few weeks as a camera operator.

Working at a TV station from a country town in Uruguay is far from glamorous.
For most of the day, these stations rebroadcast the output from a national network, with their own contribution limited to producing the local news, the commercials for local stores, and outsourcing some spaces in their schedule for independent productions. Of course there are exceptions, and some of those stations are known for their structure and their productions.

But as a rule, there will be some employees who have to cover several tasks simultaneously. Each must be able to do a bit of everything. It’s quite normal to find prosumer and amateur equipment used to run the station; you’re unlikely to see high-end professional hardware in these channels.

In the days of the analog tape, we worked with SVHS format, but it was very common to use even VHS in some situations!  In 1981, we entered a difficult period, with the arrival of color television in Uruguay. Most small stations were unprepared for the huge investment required to upgrade from B&W to color. So, we learned to improvise for our survival, and channels were never able to return to what they were in the era of black and white TV.

But if on one hand the technical constraints and staff shortages were major obstacles to the development of the profession, on the other side demanded of us an ability to adapt that forced us to be more creative and more versatile, because our viewers don't care about our limitations: they just want the best from us.

Multitasking is part of my routine since I entered this world. I remember in 1997 when I was still working in cable television, we transmitted the games of the amateur football league in our town, live for the first time, and I combined the functions of camera director, switcher operator, VTR operator in the replays, and also helped the technical crew to set up the equipment at the stadium. It was a stressful pandemonium, but I learned a lot.

Today, things are much easier, since it is possible to produce programs with lower costs and a much better picture quality, although everything is still done in a very rudimentary way, because one thing remains the same: multitasking.

In a normal work day, I edit, but I also have to check my boss's e-mail, communicate with advertising agencies and download their commercials, operate the switcher, record voice-overs, etc.

At the end of the 90's we had our first contact with non-linear editing. It was amazing for us - like magic! We started with Adobe Premiere 4.2 bundled with a Miro video card, if I remember well. Frame accuracy, random access to the footage, instant changes, etc. The new technology not only saved our time, but made our work look better.

As you can imagine, my professional learning  was made on the go, practicing while working. The few publications about the industry available here during my first years as a cameraman and editor were a good source of knowledge to complement my eduction, as well as observing and talking with professionals from the major networks who occasionally visited the town to cover special events.

Looking for an NLE

Now, if you are a good researcher, you can find almost anything online: it’s goldmine for someone thirsty for information like me. And it was this thirst that was responsible for my discovery of (and subsequent passion for) Lightworks.

I was always an enthusiast for free software. In 2009 I became obsessed with an idea: What if I could find a set of free programs under Windows that would cover all areas of multimedia production? My search did quite well, but always ran into the same thing: I could not find a NLE.

For two years, once a month, I spent many hours at Google searching the keywords "free professional video editor" and "free professional NLE," in the four languages I know (some better than others): Spanish , Portuguese, English and French. I downloaded and tried several programs that promised a lot, but they were really disappointing.

Finally, in January 2011, I found an article on LW in a French site. I confess I had never heard of Lightworks, but the more I read, the more I was excited  because I knew my search had ended.

After registering on the site and downloading the program, I went through the same problems that many users reported: from installation errors (resolved quickly) to difficulties in understanding the operation of the software.

After three days of disappointment, fighting with LW, and trying to make it behave like Adobe Premiere, I realized I had to adopt a different strategy, because to me it seemed obvious that the error was in my own actions, not in the program's behaviour.

My reasoning was as follows: "of course there has to be an easy way to do this in LW, or it wouldn't be used in so many movies. I can' t imagine the editor of Pulp Fiction fighting all the time with the program every time he wants to put something in the timeline or do a simple cut. There's  only one thing wrong here: that's me!".

I will not delve in the operation of LW or my thoughts on the program at this time, I'll leave it for another opportunity (if the editors let me). For now, I will just say that when I finally understood the philosophy behind the software and how easy is to work with it, I realized that I was in front of one of the best tools in the world for editing video.

Well, thus began my involvement with Lightworks and the forum community. First, reading and asking questions to clear my doubts, and soon I was helping others as well. It was only after a while that I realized the importance of this experience: I was participating in a huge project that was still in development, interacting with professionals from around the world with much more experience than me, who always treated me as an equal (and anyone who has participated in any forum will know how rare that is). All that, and the fact that I’m only person from this part of the world who has participated actively in the beta testing phase of the software, makes me say that I'm very proud of being a part of the Lightworks's family, and (why not?), a part of its recent history.