In Search Of: Online Self Distribution For Indies 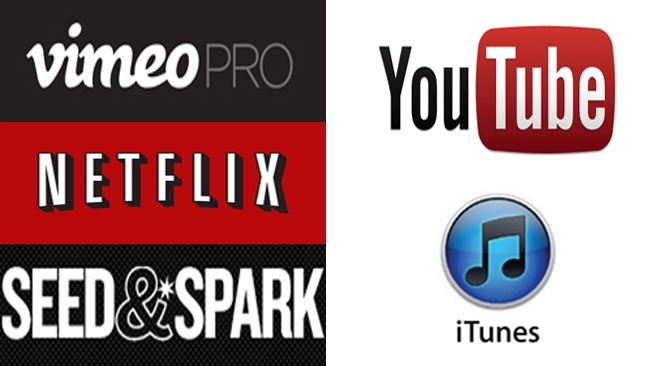 Self Distribution Channels for Indies

The subject of self-distribution has been on my mind lately. The last indie documentary I co-directed with Keif Roberts, Under The Bus (www.underthebusfilm.com), is currently finishing a small summer run at art house cinemas in New York City so it’s only logical that we’re focused on how to get the film out to a broader audience.

Distribution has always been the great plight of the independent filmmaker. Major theatrical runs are not typically on the cards for smaller films as expensive agency and branding requirements, non-transparent rating systems (such as the MPAA in the states), and advertising costs make it very unlikely that a major distributor is going to take a risk putting copies of a smaller film like ours in the projection booth (The exception to this rule tends to be the highly financed “independent” films that are really just produced “outside the studios”).

The two big challenges confronting low-budget filmmakers looking to self-distribute their films are: "How can I get this film in front of a lot of eyes?" and "how can we make it easy for people to download/stream the film AND pay for it?" Technology has helped a little. With the internet, filmmakers can easily make their films available online.
There are some services out there that, at the very least, make it easier for the filmmaker to distribute the film through trusted channels. Though in most cases, getting onboard with digital distribution can be equally as difficult as trying to hit the big screen.

Here’s a roundup of the options...

With over 36 million clients, Netflix is likely the most popular online TV & film rental service in existence. So, obviously you want your film on Netflix!

Good luck. Despite the fact that the “red giant” has a seemingly open call for content on their website, Netflix refuses to make available their qualification guidelines. According to Producer/Distributor Jason Burbaker:

"Netflix has a proprietary, systematic approach for scouting and selecting titles for their database. And unless your title is selected for the Netflix database, Netflix will not make an offer for it. This is a circular requirement. If your title is not listed, there is not a whole lot you can do to change this.” Basically, your film already has to have significant traction before you’re able to get a hitch on the “possible” list. Even then, Burbaker explains that you need to initiate an additional campaign to get enough “requests” for the film before Netflix is willing to make an offer, which “sometimes [can] be much lower than anticipated – so it is important to manage your expectations."

Again, a popular venue for every-day movie renters, but extremely inaccessible. I won’t be the first person to lament how much Apple simply doesn’t want to deal with small, independent filmmakers or distributors.

In order to have a go at getting your film into the iTunes store you will need to work with a major media outlet much in the same way that a self-publisher works with a vanity press. After paying obnoxiously high encoding costs (we’re talking $3-$7 per MINUTE) and submission costs (think $300-$700 here, depending on the company) the filmmaker will typically get around 1/3 the sales revenue.
Mac Harwood in his Blog “The Boring Stuff” cites a work-around to the Apple bureaucracy: creating an App that is a branded self-contained version of your movie. To read more click here.

YouTube Rentals a limited service, offered as part of Google’s monetization services. The service is simple and the filmmaker gets to set the rental price for each video. The major plus here is that your movie will be in the database of the world’s most popular data and video searching service.

The catch is that any video that is tagged as a rental can only play on the youtube.com website, not on any of the mobile or TV devices. The AdSense payment system also catches a lot of criticism as a product must reach a “minimum threshold” before Google cuts a check.

It’s too early to tell if Rentals is going to become standard at YouTube, and there is limited information available regarding how large a cut the filmmaker actually receives per viewing.

I’m going to say upfront that I love and frequently use Vimeo. When it comes to picture quality and ease of use, this is where it’s at. The Pro subscription ($199.99/year) is specifically designed for high-end users such as companies and industry professionals who want to promote/sell commercial products.

There are a lot of differences between a Pro membership and the other memberships offered on Vimeo, but the most important one is the ability to add content to Vimeo on Demand (VOD) which allows filmmakers to charge viewers for content they produce and, more importantly, keep 90% of the revenue.

In my opinion, the largest downside to Vimeo Pro comes from the lack of name recognition and the fact that in order for someone to rent your film from VOD, they have to have a Vimeo account with an attached credit card.

While Vimeo is a wonderful platform and is very popular among filmmakers, in the outside world people are rarely familiar with it beyond “isn’t that the fancy YouTube?”

The fact VOD works over the standard array of TV-streaming devices (iPads, Apple TVs Roku, etc.) as well as standard computer desktops, implies that Vimeo is working hard on their notability amongst the general public.

Out of all the outlets listed here so far, Seed & Spark is the one most firmly targeted towards the independent filmmaker. A relative newcomer to the online distribution game, Seed & Spark differs from the other platforms as they also offer a crowd funding solution similar to that found on Indie-GoGo and KickStarter.

As the application process is selective, not every film submitted will make it to the “Theater.” In addition to the typical pitch-video and paper work, Seed & Spark demands a heavy Social Media presence as part of a film’s distribution package (so much so that they offer two different Social Media Strategy Handbooks).

If, and hopefully when, your film makes it through the selection process, the film is added to the Studio and eventually the Seed & Spark “Cinema.” Here, other members and would-be-theater-goers can purchase views or spend earned “sparks” (which are the website’s local currency, think “Disney Dollars”) and exchange them for the ability to watch your film.

When people pay to watch your film, you get to keep 80% of the profit. When people cash in their “sparks” (which other members can earn for free by funding projects or following filmmaker’s on the site) you receive a 20% cut.

Additionally, unlike a number of the other streaming services, Seed & Spark does not require an exclusive deal on distribution. They encourage you to “Go big out there, but remember you’ll always have a home here. We don't take any of your digital or traditional distribution rights, you simply “Agree” that we can display the content on your behalf.”

A lot to take in

This is all a lot to process, but out of all the services listed here, I personally find Vimeo On Demand to the most straightforward. There is no mysterious distributor costs, no acceptance committee – just a fixed annual cost that allows me to manage my own films. That really appeals to me, as does Vimeo’s promise to let people watch my film “in HD, on big, sexy TVs.”

What has been your experience with micro-distribution? Can you recommend other services out there that might be more “indie-friendly?” We would love to hear about it!