Japan tests 4K delivery over the internet to set-top-boxes 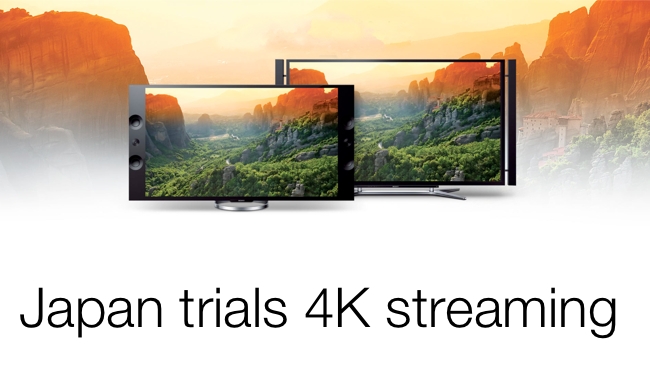 How will we get our 4K TV programs? Japan's testing delivery by internet streaming

As 4K televisions start to arrive in the shops, the big question is not whether people will buy them (it won't be long before there is no alternative!) but where their 4K content is going to come from. All the usual options (Terrestrial broadcast, satellite, "traditional" cable and delivery via IP over the internet) still apply, but with all of these, bandwidth is an issue.

The fact that 4K is four times the resolution of "conventional" HD means that new compression techniques are called for if delivery infrastructures are going to cope with the deluge of data.

Luckily, in January, a new standard for compression, HEVC - also known as H.265 - was ratified by the International Telecommunication Union (ITU) as a new standard, and manufacturers are able to build encoders and decoders for this new format in the knowledge that it is likely to be widely adopted.

Across much of the world, internet connection speeds are nowhere near enough to cope with real-time 4K delivery, but in parts of Asia, speeds of between 100Mb/s and 1Gb/s are common. Homes with such speedy connections will easily be able to receive 4K streams in real time.

And there are signs that national broadcasters are choosing the internet to deliver 4K to end users.

NTT West, a subsidiary of Japan's NTT state broadcaster, has started 4K streaming trials, using HEVC/H.265 end-to-end. The streams are decoded in the user's home by a special set-top-box that will give an easy-to-use experience to viewers who have 4K TVs.

Japan has already announced that it will be the first country to provide 4K TV via satellite, starting in time for the 2014 world cup.