Sony puts a laser in a projector 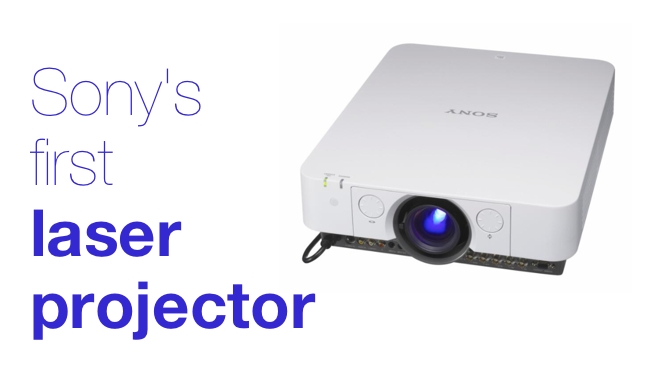 Sony's just announced an HD Projector with a laser inside

Although we'd all like to have a really good projector in our homes, as objects, they're really not the most interesting things, because they all tend to look the same, and unless you really understand projector specifications, it's pretty hard to tell them apart, unless you compare the actual images they produce.

But Sony has just announced a projector that genuinely is different, and it's thanks to this difference that one of the major problems with projectors has been solved.

The VPL-FHZ55 uses a laser light source instead of a "Lamp" (projector people get miffed if you call it a "bulb"!). Convetional projector lamps tend not to last very long, which is a pity because they are expensive to replace, and awkward, if your projector is suspended from the ceiling.

So anything that can lengthen the time between light-source changes has to be a good thing.

We haven't seen the VPL-FHZ55 in the flesh yet but we're pretty sure this is a significant development that is well worth checking out if you're in the market for a high quality projector. We'd also expect that Sony will produce a wider range of this type of projector once the technology settles in.

By the way, in case you were wondering, like we were, how you can produce a full colour spectrum from a single laser, when lasers produce only a single wavelength, here's Sony's own explanation:

The new projector uses blue laser as its light source, which excites a phosphorous material that in turn creates white light. The white light is delivered to the 3LCD optical system, generating full-time, vibrant RGB colour through a colour splitting process. The resulting 4,000 lumen colour light output produces brightness sufficient for a range of commercial applications, unlike competitive models based on one-chip imager and hybrid light source technologies.

Basingstoke, UK – June 3, 2013: Sony today launched its ground-breaking projection technology, based on a laser light source, to deliver a range of performance capabilities and eliminate many of the issues associated with conventional lamp-based projection. The VPL-FHZ55, is Sony’s first lamp-less projector using 3LCD imaging technology to achieve 4,000 lumens of colour light output at WUXGA resolution (1920 x 1200), to deliver bright and vivid colour reproduction.

“Sony has always been about innovation, and this unique laser projection technology continues that tradition,” commented Robert Meakin, Business and Education Product Manager, Sony Europe.  “Our experience in projection is far-reaching, and we’re applying that expertise to develop a solution for the future.”

The new projector uses blue laser as its light source, which excites a phosphorous material that in turn creates white light. The white light is delivered to the 3LCD optical system, generating full-time, vibrant RGB colour through a colour splitting process. The resulting 4,000 lumen colour light output produces brightness sufficient for a range of commercial applications, unlike competitive models based on one-chip imager and hybrid light source technologies.

The VPL-FHZ55 projector expands Sony’s efforts to achieve lower total cost of ownership and energy efficiency in its range of projectors. The projector offers virtually maintenance-free operation for up to 20,000* hours of expected light source, display device and filter use. The HG (mercury) free projector is packed with energy-saving features, including: Auto Light Dimming, which dims light output down to 5 per cent when left powered on without use; and Auto Brightness Adjustment, which eliminates unnecessary illumination when a dark picture is projected. In addition, the Constant Brightness mode allows users to maintain brightness throughout the expected 20,000 hour life by driving the projector at reduced light output.

The use of a laser light source also gives the projector instant “on/off” capability and “tilt- free” capability for seamless installation in nearly any setting or position. It also features horizontal and vertical lens shift with built-in edge-blending and geometric correction for flexibility and better commercial integration.

Robert Meakin added: “We work extensively with universities and businesses to understand the challenges they face when it comes to projection. One of the principal concerns across both sectors was downtime. Downtime can mean cancelled lectures or meetings, and can be incredibly frustrating for all involved. Thanks to Sony’s tried and tested 3LCD technology, the VPL-FHZ55 has no lamp. It, therefore, requires no maintenance and there is no risk of downtime. For additional reassurance, the VPL-FHZ55 is also backed up by a 5 year Prime Support Warranty.”

The new model is planned for availability in August 2013. For more information, visit www.pro.sony.eu/projectors.