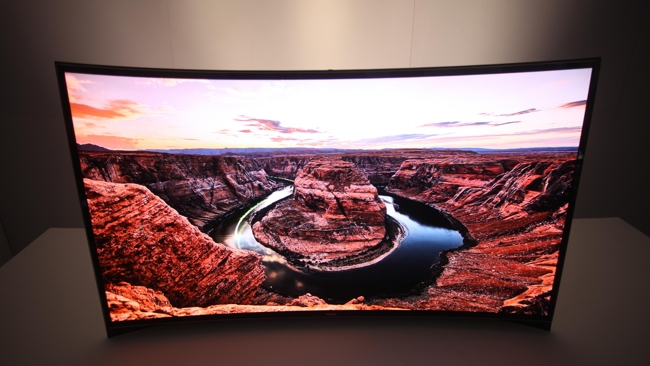 As of next month, you'll be able to buy a Samsung TV that not only uses OLED display technology, but one that's also... curved?

Ever since OLED technology was mooted, we've been tempted by flexible smartphone concepts, video wallpaper, and bits of what look like transparency film that glow when you apply a current. At CES this year, we saw demonstration devices such as a smartphone whose display you can look at on edge. Some of the earliest demos of OLED technology emphasised the idea that the display itself could not only be curved but actually flexible. At that point, most of us – alarmed by the discontinuation of CRT displays and the feeble black levels produced by many early TFTs – were more excited by the idea that OLED offered far better contrast ratio, and potentially better power efficiency. Sony have since released OLED broadcast monitors that fulfil all of these promises and more, with the caveat that the life expectancy of early models was not generally as long as the technology it replaced (this is now a problem of the past, and will have bitten only the earliest adopters). Regardless of the manufacturer, though, the image quality benefits of OLED over preexisting technologies such as TFT are not now in doubt.

TFT is intrinsically a light filtering technology, as opposed to a light emitting technology like OLED. A TFT requires a backlight which runs continuously; a TFT monitor consumes just as much power when displaying a full white signal as it does when displaying full black – or full grey. Because that's the other problem: a dark TFT pixel lets a small amount of light through. Each pixel is a device which varies in terms of the polarisation of light which it filters. To turn that into a light-gate, capable of switching visible light on or off, we must polarise the light which passes through it using a filter, usually implemented as a layer of plastic stacked with the TFT panel itself. When the pixel is dark, its polarisation is at right angles to that of the filter. When it's bright, its polarisation is aligned with that of the filter, and light passes. However, when the polarisation is crossed, some light may still leak through, and worse, when the pixel is on, the light is still required to pass through the polariser. As any cameraman knows, a polariser represents a good stop or two of loss. The white level of a TFT represents less than half the energy being emitted by the backlight.

TFT manufacturers wrestled with this for years, playing off brightness and efficiency against the need to use really dense polarising filters to achieve good blacks. OLEDs solve this issue by only emitting light where it's required. Each pixel is a tiny light-emitting diode. Theoretically, an OLED displaying a full black image requires no power. Add to this the enormous speed of reaction of which an LED is capable, and you have a display with superlative contrast ratio and zero motion artifacts to a degree that TFT absolutely cannot match.

So, the fact that OLED can be flexible is, until now, very much secondary to the fact that it's capable of high imaging performance. Why curves?

Well, it's certainly pretty, as Samsung's images make clear, but there's some history here. Some cinema screens, especially big ones, have been curved for decades – a century, even. Now, we're not talking about special curved-screen presentation formats such as Cinerama, which used three synchronised 35mm projectors on a screen curved across 146 degrees, or the IMAX Dome system, which produces a full 180 degrees of coverage. Those formats were developed for effect, to fill the audience's field of view with the image. Curved screens intended for more conventional formats were used mainly to avoid problems with focus. The distance to the outer edges of the screen is, necessarily, larger than the distance to the centre of the screen. Given the low effective F-number of the optical system in a large theatrical projector, depth of field can be very short, and it would not be difficult to create a situation where either the centre or the edges of the screen were in focus – but not both at once. This is particularly true where the projection throw is short, making the difference in distance between the centre and the corners larger.

For this reason, there have long been at least some curved screens. An OLED monitor is obviously not subject to the optical alignment problems that concern projection engineers, but it's not unreasonable to suspect that similar problems might start to affect a viewer seated close to the screen – such as, for an extremely topical example, someone seated close enough to perceive the additional detail of a 4K image.

Samsung actually call it, perhaps prophetically, an “IMAX-like viewing experience” in their press release. Although the initial displays aren't enormously big, at 55 inches, and aren't capable of 4K, it's easy to imagine future versions that would be both. You could reasonably complain that the average lounge would struggle to contain a display that was both curved and big enough to make that curve worthwhile, since the curve would prevent it from sitting flat against a wall in the picture-frame style that's become popular since bulky CRTs went the way of the dodo as a domestic display device, but frankly I think I could probably live with it if only on the basis that the new Samsung displays really are an absolutely beautiful piece of industrial design. They include a white-emitting pixel as well as the red, green and blue, in a move designed to improve the rendering of pale or pastel colours, and of course, they benefit from all the customary benefits of OLED – no ghosting, black blacks, and decent power consumption.

They're well over £8k each, but it might just be worth it.