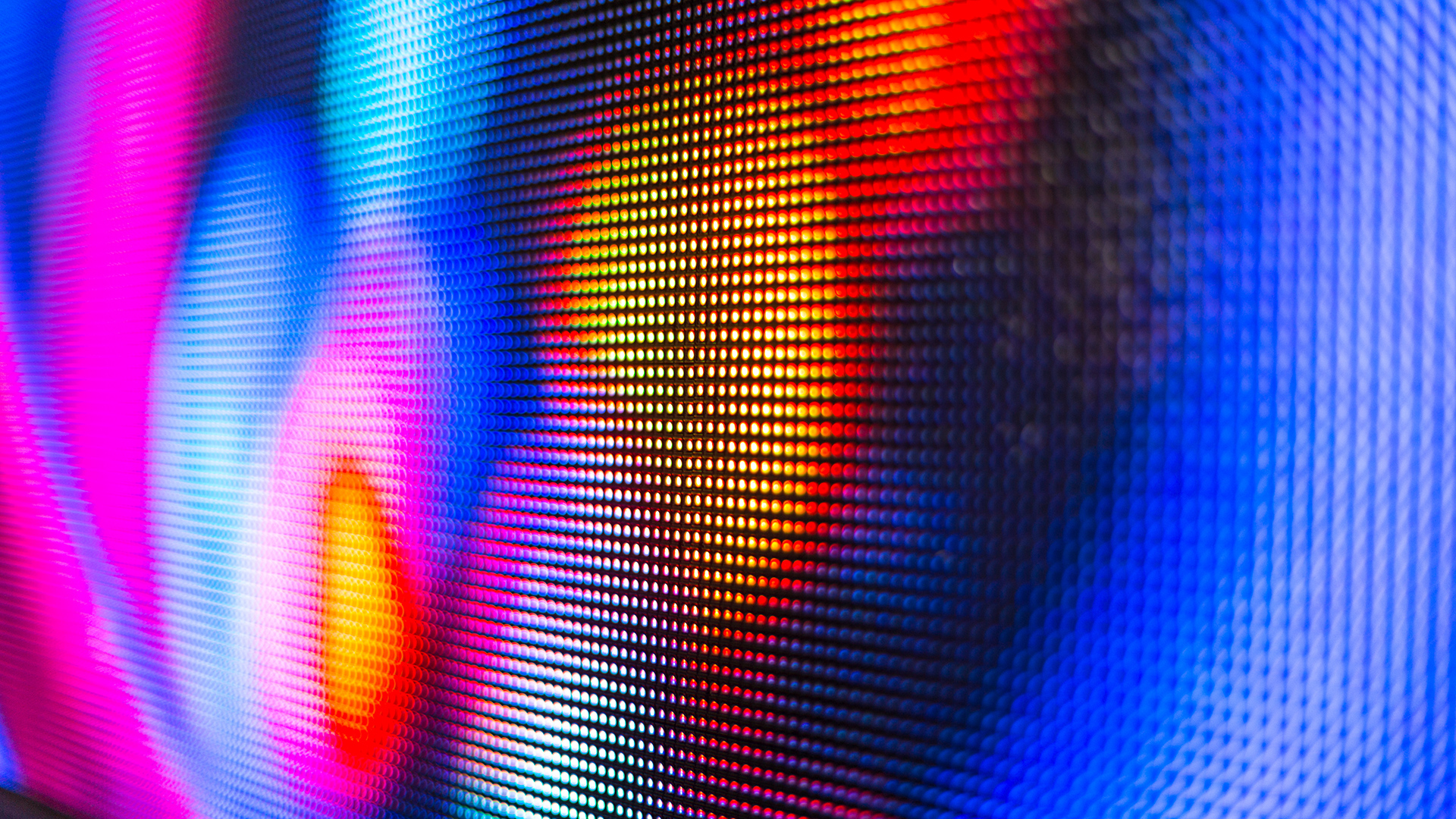 Replay: Let’s start with a puzzle: is there any technology available that emits blue light and can be switched on and off really fast, without the filament lag of a tungsten lightbulb? Now, just to make this fun, let’s assume you aren’t allowed LEDs.

This was a problem faced by every designer of a large-scale video wall at any time up until the late 90s when blue LEDs became commercially viable. The history of really big video walls is a subject we were going to cover while waxing enthusiastic about Sony’s superlative Crystal LED display, which from a distance of more than a few feet is the closest thing to a perfect picture we’ve seen to date. Going into the history of it would have made that piece too long, but it still seemed worth covering. In the end, it’s only really possible to understand how good things are when we understand what they’ve replaced.

The idea of stacking up individual picture CRTs to make a big display was always a bit desperate. The largest CRT television displays were 40 or 45 inches, but the CRTs used in video walls were often 20 inches or less, inevitably resulting in the impression that we’re staring out of a multi-paned window with particularly thick framing. It’s something of an irony that the sort of back-projection technology that makes very thin-framed displays possible came along within a decade of LED video walls that made them largely obsolete.

Before LEDs, though, there were big video walls that weren’t made out of a stack of TVs. We’re talking about the sort of stuff that’s often called Starvision in the UK, though that became a generalised trademark long ago. They all took one main approach to creating the fast-flickering spots of red, green and blue light necessary to create a colour display. Many of those approaches involved the crackle of high voltages, glowing phosphor and the smell of ozone.

Because, yes, if you said a little CRT was one way to create a spot of blue light, you’d be right. You can’t use a normal blue-tinted lightbulb, because it will be far too slow. Anyone who’s seen one of those moving-text message displays made out of little flashlight bulbs will be familiar with the way they leave glowing trails behind moving objects; we can’t have that on our stadium video display. A coil of neon (well, argon) tube might work, but it’s not that bright, and it’s not that easy to control the high voltage in the context of a single sub-pixel on a video display.

One popular solution was to make each pixel, or at least each group of a few pixels, one cathode ray tube. These weren’t CRTs in the conventional sense, with a narrow beam of electrons painting a picture row by row. These were flood-gun CRTs, with a simpler arrangement designed to blast the entire front of the tube with electrons at once. Coat the inside of the tube with blue-emitting phosphor and you’ve created a very complicated blue lightbulb – albeit one that can be switched on and off incredibly quickly.

While the CRT requires high voltage (thousands) to accelerate the electrons toward the front of the tube, the electrons can be controlled – gated off, in effect – with a comparatively low voltage (hundreds.) That makes the electronics easier. This approach was used right up to the end of the CRT video display era when manufacturers like Sony made modular displays containing four individual vacuum tubes. The tubes were made by Futaba (type number TL-3508XA, for anyone who’d like to know the details) each with eight pixels in two horizontal rows of four, so each CRT contained eight pixels and 24 electron guns to activate the 24 RGB phosphor patches. Each module – perhaps a couple of feet across – required both hands to lift and had a resolution of eight by four pixels. Modern LED displays are slightly higher resolution.

This still wasn’t particularly easy. Generating that high acceleration voltage is something that was done inside every CRT television, although anyone who looked closely at those would remember the way the picture varied slightly in size when it became very bright. That, indirectly, is an effect caused by less-than-perfect regulation in the power supply circuitry. For a video wall made up of many segments, that’s not acceptable, because individual blocks might dim and brighten as the picture content changed. Video wall modules of this type relied on very overbuilt, very expensive, big and heavy power supply engineering to work at all.

Perhaps the most – er – direct and robust approach is represented by a Russian design which used a completely separate CRT in a separate glass envelope for each individual subpixel. As such, the ILD3 tubes exist in red, green and blue variations (handily marked with a coloured paint patch on the outside of the envelope.) Each tube is perhaps an inch and a half to two inches in diameter, suggesting that the display for which they were intended was either very large or very low resolution. To improve things, they were reportedly used in a Bayer-style pattern, with two green subpixels for every red and blue pair. The Itron 2F89068 was a two-by-two pixel (four-by-four subpixel) module that worked the same way. Noritake Itron makes vacuum fluorescent displays to this day.

The result of all this glassware was a display that had, by modern standards, an incredibly poor ratio of size, weight and power consumption to resolution and brightness. The Starvision display used at the famous Queen concert at Wembley in 1985 weighed 20 tons and was craned into place. The idea that modern, LED-based large video displays are in any way inconvenient or expensive has to be taken in the context of this history. But yes, something has been lost; it’s hard to dislike any block of tech that weighs as much as a truck, emits sizzling noises and makes bystanders’ hair stand on end while displaying a Queen concert.