The most important marketing gimmick of the year 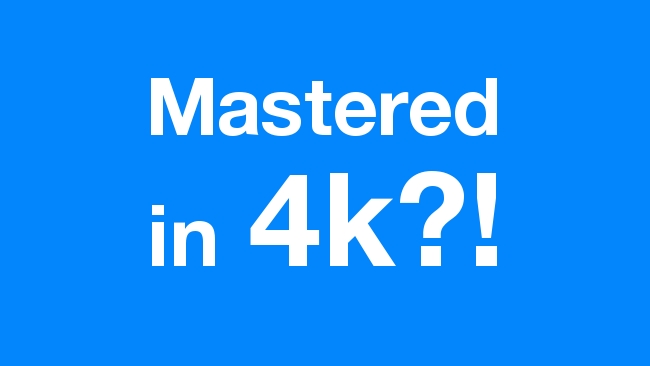 If you’re a regular reader of RedShark, then you know we’re in the early days of the 4K revolution, especially as it pertains to consumer tech. Whether you’re in the market for Samsung's $39,999 work of art, or upstart Seika’s 50” 4K set for a mere $1299, chances are you’re already strategizing ways to situate all those glorious pixels into your living room. In the midst of saving up your pennies, you may be wondering, ‘where’s all the 4K content?’ We’re happy to report that Sony has you covered...sort of.

You can bank on a full-fledged 4K content solution from Sony to arrive in the next 6 months to a year, if the word out of CES and NAB can be trusted (and we think it’s a safe bet). And you may be delighted to hear that selected television shows, highlighted by Breaking Bad, will be remastered in 4K. Selected films from the Sony Pictures catalog will receive the same treatment. This is a particular treat for fans of such classics as Funny Girl and On the Waterfront, as they will be able to view these movies at home with all the detail of the original theatrical release...eventually.

Of course, this is all somewhat speculative, as Sony’s $699 4K content device has yet to grace the market. In the meantime, the consumer electronic giant is touting it’s 4K mastering process for a new category of Blu-ray products. As a discerning consumer of technology, I’m sure you’ll respond with, “Blu-ray?! Huh?! How is this news?!”

The (familiar) road to a better Blu-ray

Sony claims that their 4K mastered Blu-rays, which involves a 4K scan of the film negative, then all digital retouching and color completed in 4K before being dumped down to 1080p, deliver the “best possible picture” outside of viewing true 4K content. But other companies, such as Criterion, have been mastering Blu-rays in 4K for years, and this practice is becoming, if not commonplace, a more frequent occurrence. The 4K mastering process was one-upped by the 8K scan and master of the visual stunner Baraka, way back in 2008.

So, this ‘Mastered in 4K’ tag is just a bunch of marketing mumbo-jumbo, eh? Well, not so fast. The name ‘Blu-ray’ has become synonymous with HD, but not all routes to Blu-ray are equal. The higher-end Blu-rays are often at least scanned in 4K. Some are mastered in 4K, while others are dumped down to 2K for processing. These days, most Blu-rays coming from the Studios start as 2K scans and have a 2K workflow, but there are scores of Blu-rays originating from 1080 scans.

More than a gimmick?

What’s the big deal? Well, the more information at the scan and master level, the better quality the resulting Blu-ray image. It’s analogous to the difference between the expensive DVDs and the bargain bin discs at a convenience store. We’ve all popped in a DVD that looked like it was digital pass-through from VHS, complete with noise and scan lines. Now, the differences between 4K, 2K, and 1080 mastered Blu-rays may not be that noticeable on your HD set, but when trying to fill 4 times the pixels, the difference will be huge.

Whether you’re an early adopter or a bargain shopper, knowing in advance that your Blu-ray is 4K mastered will assure you of a future-proofed purchase (for a year or two, at least). Sony’s new line of ‘Mastered in 4K’ Blu-rays will undoubtedly spur other companies to introduce their own line of premium Blu-rays. As the associated costs of 4K mastering decreases, and as native 4K content solutions surface, the quality of the typical Blu-ray will increase, as they will share the same pipeline as the new 4K products. As is the case with most technology, the best example of Blu-rays will arrive just as the format becomes obsolete.

But obsolescence will never look so good (until we upres 4K on our new 8K sets, that is).