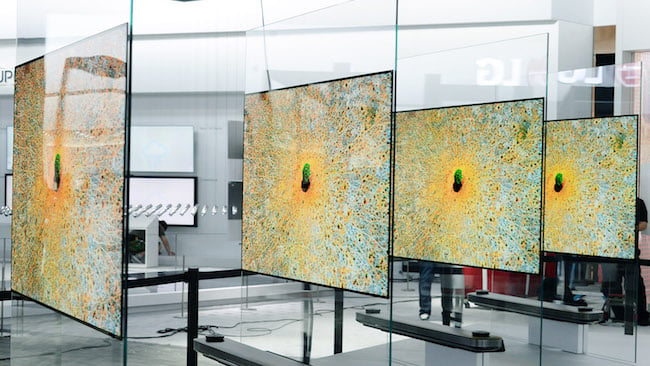 Amid all the usual hoopla about wacky gadgets — this year being AI toothbrushes, robotic cushion cleaners and walk around VR — you can rest assured that the old product category of TVs is where the largest manufacturers are putting most of their marketing and R&D. These were the CES 2017 highlights.

TVs sell. Always have done and, if the Consumer Technology Association (CTA) is right, then 4K Ultra HD TVs “arm in arm with High Dynamic Range,” according to its senior director of market research, Steve Koenig, remains one of the industry's fastest-growing segments.

It projects shipments of UHD displays to reach 15.6 million units in 2017 and earn $14.6 billion in revenue in the US alone.

Global TV volumes, meanwhile, are expected to rise slowly, though within that 4K UHD sales should see an impressive jump from 53 million units last year to 82 million next year. “OLED is also starting to make its value felt in the market but that will be a next-decade story,” added Koenig.

No TV will be marketable in the year ahead though without a badge signposting its performance in High Dynamic Range (HDR). Most manufacturers are hedging their bets, or perhaps making the only sensible choice by supporting the main flavours of HDR: Dolby Vision (technically known as PQ) which is Dolby’s proprietary HDR format; the open HDR format HDR10; and Hybrid Log Gamma (HLG), developed by the BBC and NHK which is considered more applicable to the inconsistent pipelines and final displays of broadcast than the more calibrated cinema environment.

This number of HDR formats will likely be whittled down in time. Consumers will become confused (though most major brands will badge their top of the range screens as UHD Premium meaning it includes HDR); vendors don’t want the added expense of incorporating more bits into their displays; and neither broadcasters nor Hollywood studios want to have to keep mastering multiple versions, which they currently have to.

On that point, Technicolor said it will use only LG OLED TVs as reference monitors for colourists working on Hollywood content at Technicolor owned facilities (rather than promote tools of its chief rival Dolby).

The multiple HDR options are not only available in LG’s W series, but also in its new LCD TVs. These displays will also offer a feature that LG calls ‘HDR Effects’, which according to the Korean firm means the TVs are able to produce the "best picture even if the original HDR content contains static or no metadata at all.”

All of its displays also will offer an ‘Expert Mode,’ which Technicolor chief marketing officer Sandra Carvalho explained aims to improve “image and colour accuracy ... whether the image is displayed in SDR or HDR.”

While LG covered all bases, others had more fractured HDR offerings, and Samsung continued to strike out on its own.

Also aboard the Dolby Vision bandwagon are TCL, which introduced a $500 50-inch P-Series TV; and select new Roku TVs.

Separately, Dolby announced that Lionsgate, Universal, and Warner Bros had committed to releasing Dolby Vision UHD Blu-ray Discs early this year - good news for those who own Dolby Vision-enabled sets, but potentially irksome for anyone who already owns a TV that supports only HLG or HDR10 (Dolby Vision UHD Blu-rays should include an HDR10 base layer for compatibility with non-Dolby players and displays).

Samsung is the notable outrider, preferring to tout its own quantum-dot technology (now branded QLED) as not only better than OLED for displaying those all important deep blacks but also for showing-off HDR.

The company said its QLED displays can accurately capture all colours in the DCI-P3 colour space at all levels of brightness between 1500 and 2000 nits.

Samsung is also sticking with the curved screens it introduced last year for its higher range models, even introducing a new range of curved monitors targeting gamers.

It may be un-PC but there is only one size that counts when it comes to TV. Models have been reducing in size since the junking of the cathode ray tube. NHK is even working on giant screens of 8K resolution which can be rolled up. At previous CES, prototypes of paper thin mouldable displays were shown by LG among others.

That’s the future. Right now for a cool $20k you can walk away with LG’s signature 65-inch ‘W7’ which is just one-tenth of an inch wide and weighs 18 pounds. Despite the thinness, "It's fairly durable," says Tim Alessi, head of product marketing at LG USA. "It seemed pretty substantial." The firm has designed a mount that uses magnets so the set can be fixed flat (well, 3mm) against a wall, which the firm says means it doesn't cast "a single shadow". It also boasts Dolby Atmos immersive sound.

While not as thin as LG’s Sony’s new Bravia OLED A1E would also sit flush against a wall. It has a feature called Acoustic Surface where the display itself transmits the sound by pushing the sound through the screen rather than the edges of the display.

Also notable in the category: Hisense has a 100-inch 4K TV that uses a short-throw laser projector with a 5.1 sound channel system for $13k.