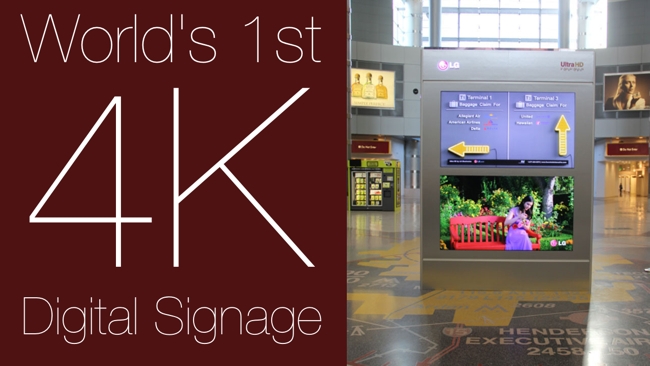 The world's first 4K digital signage installation arrives in the airport in Las Vegas. Is this a (digital) sign of things to come?

Las Vegas is often associated with brightly coloured displays and probably has more giant video screens per square inch than any other place on earth.

But most of these gargantuan LED matrix devices, although remarkable feats of engineering in themselves, have only a relatively low resolution. That's understandable because not only the power consumption but also the cost increases exponentially as the resolution increases.

They do a great job of working in direct sunlight, which is something that "conventional" LCD or even OLED screens just can't do.

Away from the glare

But inside, away from the direct glare of the sun, it's a different story, and "conventional", high definition LCD screens come into their own.

Not that there's anything conventional about LG's new installation in McCarran airport's D Concourse, which may well be the world's first 4K digital signage project.

Featuring not just one but two of the commercialised version of LG's 84" 4K display, and carrying heavy LG branding, the installation is used for a "Wayfinder" display on the upper screen and shows 4K video running on the lower device. (A "wayfinder" display helps people to find their way around).

Quite aside from the actual digital signage function of the Las Vegas installation, it will be an excellent way to get a large number of visitors in front of the 4xHD format - 32,000 passengers pass though the concourse every day. And this is a good thing, because we still think that the vast majority of people who still say that 4K is unnecessary have never actually seen it.