4K: wait until you have a 75" set in your home before you judge it 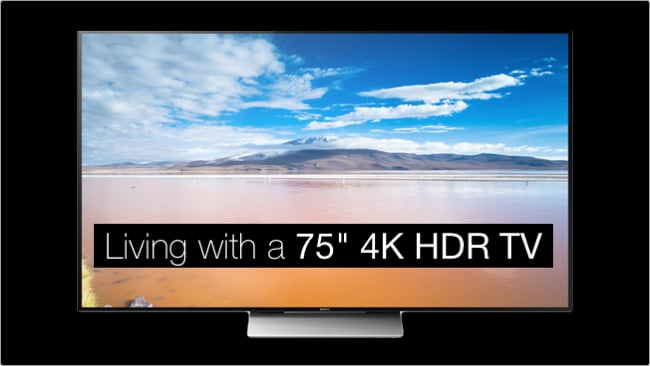 I’ve spent Christmas in a 4K winter wonderland. Well, that's overstating it a bit, perhaps, but with a Dell 32" 4K monitor on my desk and a 75" Sony 4K HDR set to play with, it's been by far the best chance I've ever had to spend some quality time in front of all those pixels.

I should add that I'm not the owner of either of these lovely displays: the Dell is on loan and the Sony is resplendent in the rather large Victorian living room of a close family member.

The Sony Bravia in question is the snappily named  KD75XD9405BU, which at around £4000 ($4900 at current rates) is hardly an impulse buy, but seems an absolute bargain when you look back four years to when the first sets came out at around five times that price. You can buy much cheaper sets that size, even 4K HDR ones, but there are significant differences, mainly around the backlighting technology and the on-board 4K processing.

But I don't want to talk too much about the tech here. Instead, I want to tell you what it's like living (albeit only for a few days) with a set like this. I realise some of you may already have a set like this, but I'm guessing that most don't.

First of all, let's talk about the size. At 75", it's 5" short of twice the diagonal of a 40" display. Another way to imagine this is to think of a screen that's slightly smaller than an array of four 40" TVs.

Even in a big room, this is big. The only way you'd acceptably get this into a "normal" sized living room is to hang it on the wall, or at least inside a very large media cabinet, absolutely parallel with the wall. Forget about putting this in the corner of the room, unless you want it to completely dominate your space.

Here's a handy tip. If you're buying a big TV because you sit a long way from it, get an HD one. If you sit more than a critical distance from even a big set like this, you probably won't see much benefit from 4K. There are some real HD-only bargains around, even at these huge sizes.

But the fun starts when you swap out your 40" HD set for the big one and resist the temptation to move further away from it. Stay the same distance, and the screen will seem huge. It will almost fill your field of vision and, most importantly, will have the same pixel spacing as your original 40" set. And this means that you will absolutely see the difference between HD and 4K. This is what I tried and I can confirm that the difference between HD and 4K is very noticeable indeed - even with high quality upscaling. Note that all comments about quality here are while viewing a very good source. Broadcast HD upscaled to 4K can look OK but can also look pretty deplorable, depending on the bitrate of the transmission.

The other thing I can confirm is that it's really nice to have a set on such a scale. Very simple words do a good job here. It's large. Big. Huge. All in a good way. It really does change the viewing experience, especially when watching movies in the "proper" aspect ratio. The screen's so gigantic that you're still left with an impressively expansive picture despite big black bars at the top and bottom of the screen.

The picture itself was very, very good. And like all good screens, it was quite analytical.

The first thing I did was to go through all the "picture" settings. Mostly, I turned them off. Sharpening, motion enhancement, "vivid" mode… All of these and more tend to be set to "on" by default, presumably to attract non-critical viewers in department stores. Grass that looks like it's lit by an emerald laser doesn't do it for me.

Surprisingly the setting that gave overall the best picture was "Cinema Pro"'. It made everything look slightly flatter (slightly "log") but was much kinder to a wide range of material.

There were a few issues, mostly not the fault of the set at all. I found that a lot of documentaries, even those shot in 4K and available from Netflix, were very "Rec 709". While impressively sharp and colourful, they revealed very little subtlety, and the blacks gave the impression of being crushed. I don't think they were actually crushed, but, this being an HDR set, it had very black blacks. At least if the black weren't so deep, the "709" footage would have looked a bit more subtle, even if only because dark greys would be visible, because there were no real blacks.

This does highlight an issue that is redolent of the age we're living in: you can't assume that your TV will automatically reproduce content optimally. We should assume that some adjustment might be needed.

Overall, though, I was incredibly impressed with this set. The size might not be for everyone, but if you can afford one, and afford the space to put it in - and - if you sit close to it, then you will a) be amazed at what we can achieve with TV these days and b) wonder why there was ever any controversy over whether we really need 4K.