Going live in commercials: the new demand for instant access in live ads 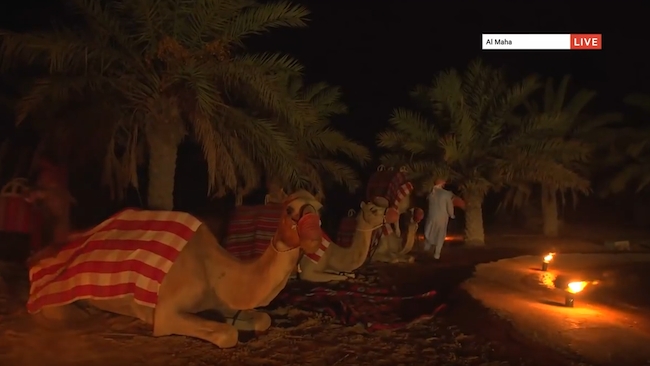 Live from Dubai, for all of three seconds

Back to the future: While much of the industry concentrates on getting better quality pixels onto better quality screens, the immediacy of live TV is proving attractive to advertisers searching to grab eyeballs. How attractive? Try 18 locations in one 60-second commercial.

Brands love to be first with a format since novelty on its own generates column inches and internet buzz but the rise of live social platforms is taking advertisers and broadcasters way outside their comfort zone.

The high water mark this year was a 60-second live ad created for Virgin Holidays by agency AMV BBDO and aired in September at the start of X Factor’s run on ITV in the UK – and also via Facebook.

Creatively, the spot was unremarkable in its depiction of families at various popular long haul holiday destinations enjoying themselves, but its ambitious live production generated all the publicity which Virgin would have wanted to launch its Seize the Holiday campaign.

Video was shot simultaneously from 18 locations including Hawaii, Maui, Thailand and Florida with streams cut live into roughly three second clips by the gallery director and vision mixer at ITN Productions’ London HQ.

Technically, the spot was achieved following six months of planning, a 90-person ground crew and a dress rehearsal the day before wrangled by director Simon Ratigan.

Having considered satellite and fibre connectivity to bring the live images back, ITN Productions used LiveU’s portable cellular transmission kit LU200 for 15 of the 18 locations. The units were chosen, according to ITN, for flexibility, reliability and cost reasons.

In the event, one feed, from California’s Pacific Coast Highway, failed to materialise resulting in blank picture colour bars on-screen. The producers could have simply cut this feed out but chose to keep it in to maintain the feeling of live authenticity. They had wriggle room too as the spot wasn’t quite live - the feed accommodating a 30-second delay in order for ad standards enforcement agency Clearcast to give it the nod.

However, the use of live as part of the traditional TV ad inventory is likely to become more common as brands risk the traditional polish for a chance to directly engage an audience on social media. Central to Virgin Holiday’s campaign in this instance was a follow-up launch on Instagram.

Earlier this year, on a smaller scale, UK high-end supermarket Waitrose live-streamed an ad from one of its dairy farms, while in June, Channel 4 partnered with Sony Playstation to take over the whole ad break during Gogglebox for an interactive Twitter-based competition. The campaign resulted in 25,000 entries and trended first on UK Twitter.

We’re likely to see more of this sort of thing too. Here’s Chris Braithwate, agency principal at Channel 4 sales, talking to Marketing Week [https://www.marketingweek.com/2016/05/13/how-the-ad-break-takeover-is-reigniting-tv-advertising/] “Viewers are now watching big shows like Gogglebox and almost expecting something different to happen during the ad break. If it doesn’t, they are disappointed. Brands want to create great drama and make sure people don’t fast forward.”

Have a look below and let us know what you think.