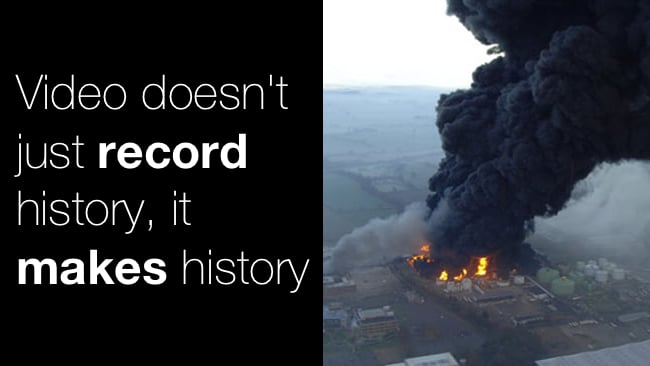 Replay: When the UK experienced the biggest explosion in peacetime at the Buncefield Oil Depot in Hemel Hempstead, I was right there, and I had absolutely no idea what was going on. Nor did the rest of the country.

I woke up suddenly, a bit confused. I was in a generic hotel room and I could have been anywhere.

Then I remembered that I was in Hemel Hempstead, a 'New Town' built by the UK government after the war to house Londoners whose dwelling had been bombed.

I'd heard a very loud bang. I immediately convinced myself that, in the room upstairs, a wardrobe had fallen over. It was followed by silence, as you'd expect at six in the morning.

I didn't try to get back to sleep. I felt unsettled for some reason. I turned the TV on to the BBC's 24 hour news channel. A news reporter was talking live from outside an official-looking building in London. I wasn't listening, but I was watching. He flinched, almost ducking. This looked unusual. I started to hear what he was saying.

"I'm sorry about that, but I've just heard a big explosion. It sounded quite close. I've no idea what that was. Forgive me. I'll carry on."

You don't see that every day, but, even so, it was just a passing thing.

After another five minutes, the news anchor said "We're getting reports of an explosion in Surrey." And then, minutes later: "more reports of explosions." Very soon after that. there were dozens of explosions, all over the south of England, and even one in Holland.

The BBC news department must have wondered how they would cover this emerging event. For a few minutes. it sounded like the whole country – and possibly even Europe – was under attack.

Then, someone phoned in. They had a webcam which they pointed at an oil depot. It was on fire. It was still dark, so it was hard to make out the scale, but it was pretty big because the caller was in his house over a mile away. The oil depot was in Hemel Hempstead.

I drew the curtains and I saw multiple columns of flame about three hundred feet high. I was three miles from the explosion.

The speed of sound

In an instant, everything made sense. The reporter in London heard the explosion a minute or so after me because that's how long it takes sound to travel thirty miles. The explosions throughout the country weren't new explosions; they were people reporting to the news organisations that they'd heard a loud bang. It was the same with the person in Holland. What confused me was that I heard the bang within seconds, but there was nothing to corroborate it. I had no frame of reference. If I'd opened my curtains immediately (and likely been scared out of my wits), I would have phoned the BBC instinctively.

One of the reasons for the delay in reporting this cataclysmic event was that it happened when most people were asleep.  That it might have taken place when everyone was at work doesn't bear thinking about. Nobody was killed and there were only minor injuries. But houses for miles around (including the one I had sold two years earlier) were damaged. Thousands had windows broken and an entire industrial estate was flattened.

As I drove away that morning, the sky was full of fumes. A fat black billowing snake of smoke connected what remained of the oil depot to the sky and lingered for at least a week.

If this had happened today, there would have been live coverage in seconds. As it was, the story only began to make sense – to anyone – when that person with the webcam had the presence of mind to point it out of their window while on the phone to the BBC.