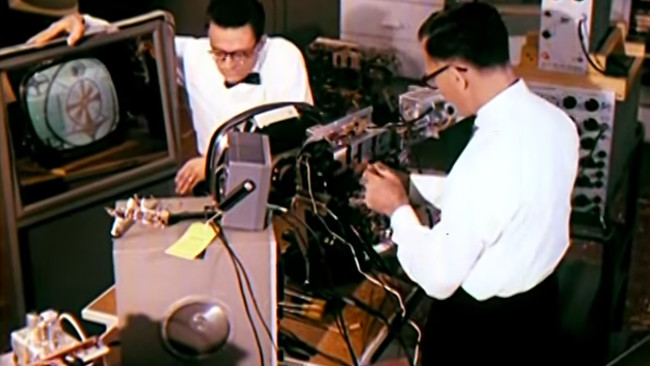 Still/Crop from 'The Reasons Why'

Replay: A documentary about television manufacturing from back in the day sheds light on just how far we've come.

I was born in the Cretaceous period, so I can easily remember when we had black and white TVs with almost circular CRT displays. You could have missed an entire programme while you were waiting for the set to warm up. Often, you had to mess around with the vertical and horizontal hold controls to minimise the feeling that you were moving rapidly between floors in an insanely fast elevator.

I even had a TV from the early 1960s that came with a remote control, but a wired one. It had two buttons: forward and reverse. It was all pretty superfluous because we only had three channels at the time, but there were plenty of unoccupied spaces on the dial that you had to pass through to find a real, working TV station. The problem with this set-up was that the remote control triggered a motor in the TV that drove the purely mechanical tuner. It made quite a racket.

One day, something went wrong and I couldn't stop the motor. As long as the TV was turned on, the electrically-driven tuner would rotate through all its slots continuously, resulting in, as far as I know, the most useless TV set that's ever been made. I used to bring my school friends home to marvel at the pointlessness of this contraption.

At one point, I had seven TVs in my bedroom. Some of them were rather ugly. A couple had that 1960s chic look that is so fashionable today. And at least one (a 'Bush', I think) was an absolute design classic that almost defined the look of the era.

I watched Richard Nixon's resignation speech live on one of those sets. I had no idea who Richard Nixon was or why he was resigning, but some things stay with you all your life.

Here's a documentary film about how they made TVs back in those days. What's impressive is the way that there's so much emphasis on design and quality control. It's easy to dismiss these sets as primitive, which they are, from our perspective. But at the time, they were cutting-edge and that is what connects us, today, with the people and the products in the film.