The rocky path to the Digital City 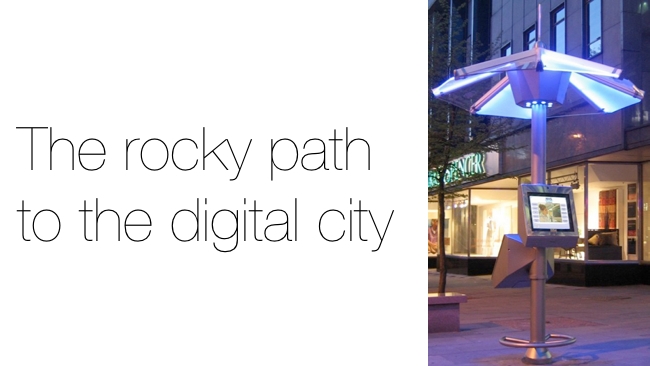 Networks, big LED and LCD screens and public spaces in towns and cities are made for each other. It's easy to envisage a network of interactive screens creating a "virtual digital city"; but it's not so easy to see how they can pay for themselves, even if they provide a social benefit. Here, industry-insider, David Phillips sets out the current state of affairs in public outdoor video screens

The concept of the Digital City providing ubiquitous digitally delivered interactive services for the public was assumed in years past to be the province of local or central government. Trans-nationally the European Commission initiated programmes to fund hundreds upon hundreds of projects with this aim. Most projects included large technology companies who had lobbyists focused upon a free revenue source. Virtually every single one has failed to produce any ongoing service once the initial imperative and money ran out.

In my opinion this result is inevitable as these operations were mostly artificial, had either no real need or technically failed. Most if not all were just a grab for funding. Virtually all of these endeavours had no self sustaining revenue generation or the principle for which they were designed changed as a priority – with very few if any ongoing today.

Judgment upon these initiatives must point to a convergence with the private sector, but not on the basis of just giving dominant large telcos and computing monoliths cart blanche. Great ideas and pioneering methods often come from smaller enterprises with new ideas encompassing ability to generate positive revenue, whilst still serving the local community. The vision should not become a lost cause.

The few public service systems that did prove valuable in the pilots and demonstrators were then copied by other more powerful operators as is often the case with technology ventures: those who do it second often benefit the most. There are one or two exceptions.

There is also a separate stream of activity from the outdoor advertising and commercial sector. Outdoor advertising has been dominated by illuminated printed posters. Positions in our cities for these poster adverts has been provided to operators for very little observable benefit for the local community. Technology can now change this with the advent of sustainable outdoor digital methods.

So in hindsight it has been a long and winding road to fulfil the expectations of interactive outdoor digital. It requires technology to be stable enough as a very basic requirement: that’s a given but it was hard to achieve in the early phases of digital outdoor systems.

Many factors militated against making a success out of these types of systems; they had many obstacles to overcome. They had to fulfil a real need, they had to operate in harsh conditions 24x7 unattended, cope with variable weather conditions and be vandal attack proof and importantly: simple enough for anyone to use. Then after all of that they had to be cost efficient or cost saving or revenue generating. To combine all of these elements into a single system and set of services was a long time coming but it’s almost here. Its all about convergence of two streams of activity: one the public service route the other the outdoor advertising industry.

There have been many bear traps, pitfalls, misunderstandings and bureaucratic blindness within the public sector; for any interactive public service. Recent austerity measures have probably terminated any surviving systems that evolved through all of the technical and operational barriers. These that did emerge operationally of sound value were only to be cut in the current climate of government budget trimming. This is inevitable as a political decision yet strange as frontline interactive services can make great savings but are too often a hidden benefit that is unquantifiable. For example, systems that encourage and support tourism have no provable positive incoming revenue stream attributed to the department that may have initiated such a technical project of touch screens and supportive free Wifi infrastructure.

Digital Out Of Home refers to the Digital Signage market.  Mostly, this means outdoor display information and digital advertising services. The very same underpinning technology to produce such new digital displays can also be the platform for public service provision.

These are the services I'm predicting

Street-located information hubs with local content - tourism, “way-finder” options showing where amenities, places of interest are; what’s on etc. On the same network council services can be provided through very easy to use touch screen navigators also sending it to mobiles in the vicinity are the services I am predicting.

With the wide uptake of WiFi enabled mobile phones, ipads, and tablets, free public WiFi access increasingly looks like a must-have service for any modern city.

Providing all such interactive elements and services with a city focus can be done in a fusion of technologies, and, importantly, it can serve many purposes. Such outdoor hubs carrying high value digital poster adverts on the same units can pay for themselves and produce revenue for the city. Importantly, any advertiser can also reach the public directly – it’s a situation in which all parties benefit.

As noted in Strange Displays – Street Broadcast were very brave as a forerunner to test digital posters before anyone else, a pioneering effort that technically failed yet showed what was possible – outdoor digital posters.

CitySpace, a company owned by Clear Channel for testing the interactive outdoor kiosk market, put out hundreds of units in UK cities. However their endeavours appear to have failed, and they have now been sold.  If they have failed,  I guess is due to having no associated strong revenue generator.

Public DataWeb built the digital Street Umbrella which succeeded technically and provided public services for six years in Aberdeen but was withdrawn last year due to austerity cuts. Again this option had no associated strong revenue generator.

We can see what is needed

So we can see what is needed to underpin any public service: combining it with positions in the city currently occupied with paper poster displays – but modernise them into digital service hubs.

The outdoor display technology to do this, to upgrade such outdoor locations is here. The very latest outdoor operable and higher definition LED tile technology now enables high quality outdoor digital advert displays. These can be built as service hubs, street kiosks or put onto lamp-posts.

With a high quality digital advertising screen providing revenue, the missing element – a strong revenue generator, enabling public services to be sustainable.  A new localised broadcasting medium can evolve that has all the social aspects of previous systems is now feasible.

Of course the future is with personal mobile devices; linking these into an interaction with outdoor public displays is predictable because it can reach people when they are out and about in city centres.

Media platforms for advertising are fragmented and outdoor advertising is the only single system that reaches people within a common gathering environment: city centres. When they are at home they have a huge plethora of information and entertainment options and such fragmented advertising opportunities are less and less important to advertisers.

Online advertising combined with outdoor is certain to have a good future.

Outdoor provides an instant direct back-channel to the advertiser’s website from a persons mobile which in tern can trigger the link from an outdoor digital poster display!

Each city has the power to provide locations in their streets for advertising. Currently these operations are dominated by just two huge international companies JCDecaux (French) and Clear Channel (American).

As noted in the Strange Displays  article, Street Broadcast were a forerunner to test digital posters before anyone else, a pioneering effort that technically failed. However it did prove that at least one local city council (Liverpool) was amenable to new types of on street advertising.

One thing such failures do is generate is a fear of failure for the city employees responsible for the decisions. Things are changing now and with the convergence of digital outdoor systems the question is: will the local authorities have confidence to allow new entrants? Or will service and technology providers developing convergent combination systems be delayed and forced to operate with these incumbent giants?

Will LED tile pioneers be kept at bay until being overtaken in time by those who come along second?

In the past outdoor advertising locations in city streets has given little or no return to the local tax payer, the viewing public. Now for the first time technology can combine the advertising element with a positive public service. Giving the tax paying local public a valuable service, piggy-backed on the technology that can replace the currently intrusive adverts that the public can’t avoid viewing in their streets. Yes, the public will have the same adverts but on this type of network they might appreciate a positive service of benefit to them.

Will the UK be left behind?

Here's an early example of a good British idea biting the dust to emerge years later, reinvented by a much larger USA company.  It’s like anything invented here can’t be as good as an idea copied and re-packaged from a more acceptable vendor.

Lots of systems have been devised over the last two decades with the aim of brining interactive multimedia systems to the general public.

As far back as 1988 the Job Centre network put out touch screens in remote locations, particularly pockets of high unemployment levels. They were in civic centres, libraries, council buildings. They had all the current vacancies displayed in two test locations, Glasgow and Wolverhampton, and with automatic phones to apply for an interview. This system operated a long time ago but is still functionally advanced both technically and in terms of the vision, more so than the touch screen kiosks that all the UK Job Centres currently operate.

The concept was to put outreach Job Centres in the community. A Job Centre in the window of Marks and Spencer’s Glasgow was operating. An interactive touch screen window operated long before the American company - Inwindow Outdoor, conceived in 2012 of making windows into interactive advertisements. The Scottish Job Centre network introduced an interactive current vacancy public access window service, which was covered by national TV networks and visited by Margaret Thatcher and other government ministers.

This was all extremely efficient and leading edge, so it was bound to be cancelled! It was cancelled,  and 15 years later that the same government department installed touch screens inside their premises, purchased from an American company: EDS. 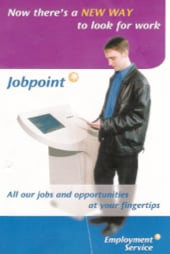 The point is that the earlier system would have caused huge reorganisation to the government department and resulting in huge efficiencies causing vast amounts of revenue spend and operational cost savings.

The lesson is that reducing a governments budget is the last thing such a department wants as the treasury judges the importance of such departments by the amount of money they consume. Reduction of spend equates to reduction of importance!

This, in my view, is why this indoor kiosk system costs SO MUCH!