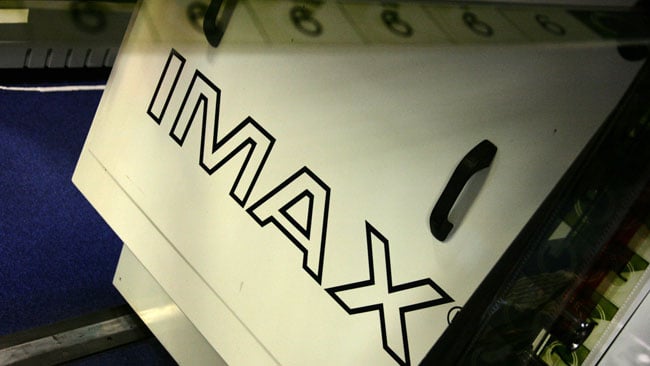 The rear of the two-ton IMAX projector.

We delve into the topic of IMAX projection systems, as a technical format and exhibition standard, and look to its future.

The history of film production involves, perhaps famously and perhaps notoriously, a lot of different formats. Even discounting the earliest days, there have been many ways to record and show pictures, from the Academy ratio of early 35mm, via a simple crop to widescreen, mid-century greats like Cinerama and Vistavision, and then Cinemascope, which survives to this day in either super-35mm or true anamorphic forms. Some of these – as now – were developed with an eye to the encroachment of ever-improving television, and all of them still use fundamentally the same recording medium: 35mm motion picture negative.

It was an almost constant parade of people concluding that less is not more, and deciding to leapfrog the competition. 70mm wide film had actually existed for quite some time – at least since the 1890s – and was tried again in the late 20s, when it was somewhat overtaken by the re-equipping requirement of then-emergent synchronised sound. Traditionally, it was used to shoot – on 65mm negative – and project images five perforations tall, with the film running vertically, as with 35mm. A portion of the film area was used for the soundtrack. 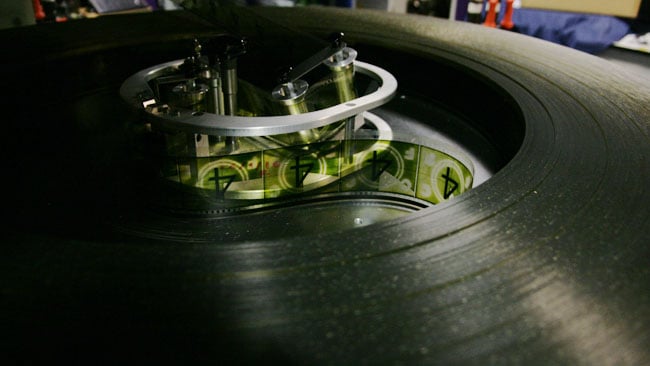 The people behind IMAX, however, wanted more, and rotated the film to run horizontally, as with Vistavision in 35mm, and omitted the sound. Film-based IMAX exhibition has always relied on double system sound; originally, magnetic 35mm recordings were the best choice, but a digital system is now used. To describe the 15/70 format as upscale barely hints at what's being done. The image is – to the nearest millimetre - 70mm wide by 49mm tall, dwarfing the 22 by 19mm frame of conventional 35mm film. Various people have claimed that the effective resolution equivalence in digital terms is at least 12K; there are naturally many arguments around the subject, but it is impossible to claim that the format is not very highly capable. There was much shouting when IMAX began certifying screens using two Christie 2K DLP projectors, although there is reason to the idea that overlaying the two projectors with a small pixel offset can increase perceived resolution and, naturally, brightness over a large screen area. 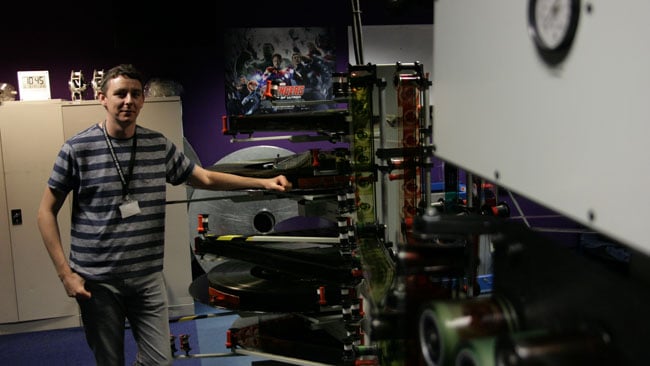 The images accompanying this article show the projection room at the Science Museum's IMAX Theatre in London, which is one of less than a hundred venues in the world that is equipped to project 15-perf 70mm in stereoscopic 3D. It is arguably the most capable projection system ever produced, certainly for public exhibition. As a venue specialising in documentary films, it's fitting that the brand-new production A Beautiful Planet was recently shown here for the press, in the presence of director Tony Myers and director of photography James Neihouse, ASC. 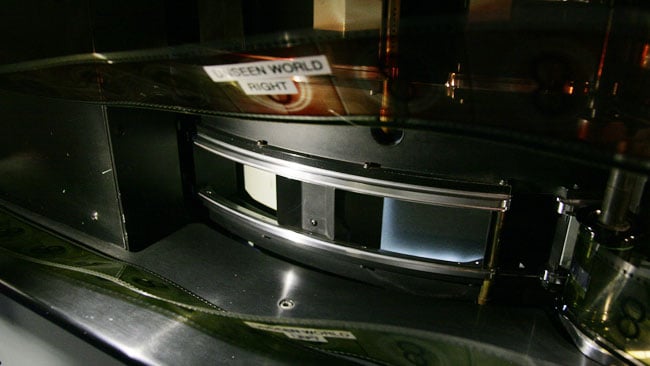 Everything about this sort of presentation is enormous.  The large image requires a film print that moves more than three times faster than 35mm, and two are required because the system uses polarisation to project both eyes simultaneously. The film is so large that conventional pulldown claws, applying sufficient force to move such a lot of film so quickly, would shred the sprocket holes. The specialist transport mechanism, which is based around a large rotating drum a couple of feet wide, uses compressed air jets to tuck the film into loops, avoiding the need for a conventional intermittent mechanism. Both projectors and cameras are pin-registered, with precision-fitting pins pushed into the perforations to ensure the maximum possible precision in locating each frame. 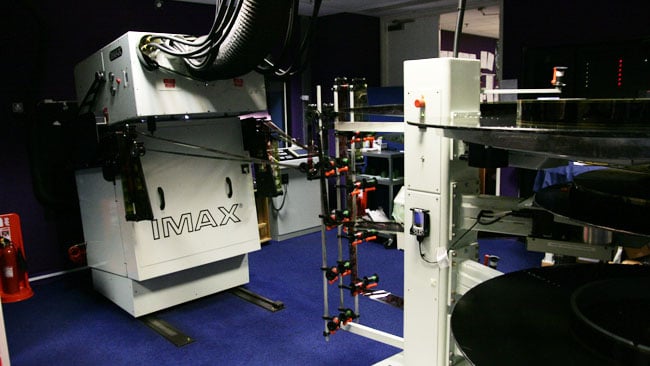 Ducts and cables connect the projector, with its air and water cooling and high power requirements, to the plant room above.

The light source for the two-ton projector is fundamentally similar to those used in conventional 35mm projection – just bigger. Much, much bigger. Most conventional 35mm projectors might use a 1.5kW or 2kW Xenon short-arc lamp. The  lamp used here is capable of 15kW, ensuring high brightness despite the intrinsically lossy polarisation system used for stereoscopy – and yes, there's one lamp per eye, for a total of 30kW. Even the polarising filters, mounted on the wall where the projection ports exit the room, must be air-cooled, since they must each sink half of the projector's optical output. The feed and takeup reels are computer-controlled. The power supplies for the lamps are housed in another room upstairs, and the lamps are water-cooled. Very little is small or simple. 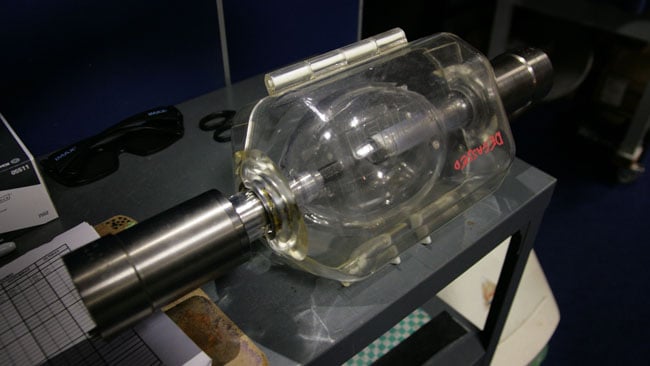 Technical minutiae  – or rather, gigantiae – aside, 15/70 projection is something of an endangered species. IMAX exhibition itself remains profitable; much as it might be tempting to dismiss it as of niche interest, Mission: Impossible – Ghost Protocol reportedly took thirteen million US dollars over 425 IMAX screens, which puts all of this upscale projection effort into an entirely new – and very bright – light. The problem is that this can be done with just as much financial success and rather more easily with digital projection. Much as people complained about the 2K projector approach, it's a more difficult to decry the very high quality laser-illuminated projection that IMAX now specifies. While the dual-2K projection was probably rather inferior to the 15/70, the 4K lasers are very respectable and don't suffer the registration issues that can detract from even the most careful film projection.

The Science Museum, as an essentially non-commercial venue, is considering the options as regards a laser projection installation. The motivation behind this is simply the dwindling availability of 70mm prints. Even for the recent Star Wars film, only fifteen 70mm prints were produced and the Science Museum projected the only one in Europe. Nonetheless, there is at least an ambition to maintain the 70mm projection facilities as well. As a museum and therefore to some extent an archival facility, it would be a nice thing to keep. Here's hoping. 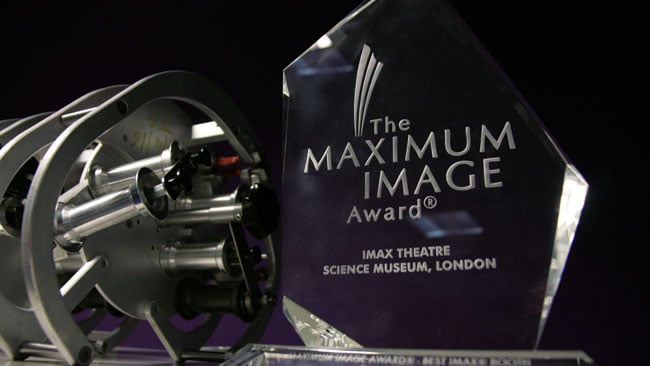 Thanks go to Matthew Raymond, IMAX technical manager at the Science Museum in London, for facilitating this article.