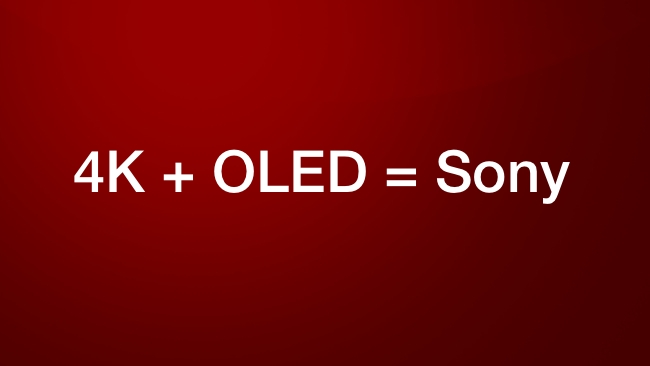 CES pundits have been speculating over the last few days, quite wrongly in our view, whether 4K or OLED will be the next big thing in television

We think the speculation is misguided because 4K is about resolution and OLED is a display technology that works at any resolution. And either outcome is academic anyway, because both technologies are currently way above most people's budgets.

You would probably need to be rich enough to buy Australia to afford one of Sony's 4K OLED Screens, the concept of which was announced yesterday in Las Vegas.

Just what sort of announcement this was, we're not quite sure, because it certainly didn't contain the price, or when we might expect to see this screen in the shops.

Give that low yields are what are holding back production of OLED TVs of any size, it's probably reasonable to expect that we're not going to see any of Sony's OLED 4K wonders anytime soon. At the very least, yields might be a quarter of what you would see from "mere" HD TVs.

Essentially, we don't know whether this was a marketing exercise (there's always some milage in being "first") or whether there really is a product in the labs that's just waiting for the right time to emerge from the shadows and into (wealthy) people's living rooms.

But knowing that someone like Sony thinks it's possible, does move the whole 4K thing forward a bit. And you never know: this might be real and in the shops for next Christmas.

One thing we are certain about is that Sony's existing OLED screens - which only exist in relatively small sizes - are capable of showing some of the best pictures that we have ever seen!

A very short time after Sony announced that they were the first in the world with OLED 4K big screens, Panasonic revealed their one as well. But Sony were still first. Just.

Here's the story in Sony's own words:

Up until now, in order to force light through the OLED layer, OLED TVs used low-temperature polysilicon (LTPS) thin-film transistors (TFTs). However, there were some challenges inherent in the manufacture of large OLED displays.

Using oxide semiconductor TFTs Sony has been able to produce this new larger display. The new OLED component's structure also incorporates Sony's own 'Super Top Emission' technology, which has been successfully incorporated in other products already introduced into the market. This 'Super Top Emission' technology has a high aperture ratio and enables light to be extracted efficiently from the structure's OLED layer. By combining two Sony developed technologies, Sony has been able to overcome some of these challenges.

This prototype delivers all of the features expected from OLED TVs, such as high contrast, brightness, rapid video image response time and rich images produced even at wide viewing angles, all packaged in a large 4K resolution panel.

The OLED panel used in this prototype 4K OLED TV on display at the exhibition was jointly developed with Taiwanese company AU Optronics Corporation (AUO).

Sony has long been actively involved in the product development and mass production of OLED displays. Beginning with the release of the world's first 11-inch OLED television in 2007, Sony went on to release 17" and 25" monitors for professional applications in 2011. On the research and development front, Sony has given presentations on the results of its research in process (manufacturing) technologies for mid and large-sized panels as well as presenting research findings on oxide semiconductor TFTs and flexible organic TFTs. Sony is also actively working on next-generation OLED technologies.

Sony will continue to research OLED technology with the goal of commercializing its new 4K OLED televisions, as well as launch 4K LCD TVs like the BRAVIAs exhibited at CES2013. From filming to editing, content creation, delivery, distribution and display devices, Sony is making its unique new 4K imaging experience available to users in a wide variety of ways.