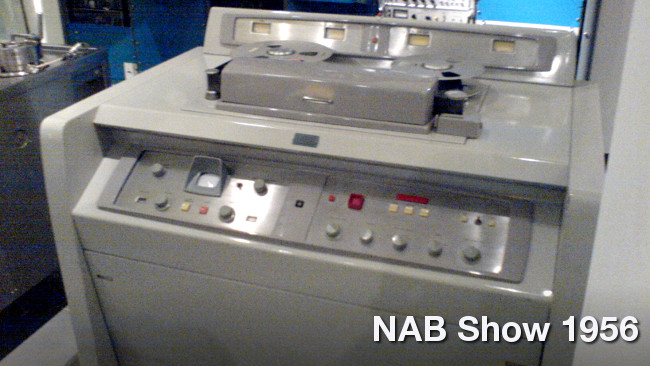 RedShark Replay: In case you think some of the announcements we hear nowadays are game-changing, here's a look back at a truly groundbreaking one from 61 years ago that changed broadcast television forever. And that's no hype. By Phillip Moss.

Saturday 14th April 1956 was a big day for the TV business. 60 years on, in TV stations and studios around the world, the invention that was launched that day is still in use – but perhaps not for much longer.

Crowded into a room in the Conrad Hilton in Chicago, two days before the start of the 1956 NAB conference, executives from CBS were told they were going be shown something new. As Bill Lodge, Vice-President of CBS spoke to his colleagues, a live picture of Bill was displayed on 20 TV monitors placed around the room. Even back in 1956, this was not that remarkable. What happened next however was truly remarkable.

A short while after Bill Lodge had finished speaking, the TV monitors flashed momentarily. The pictures rolled and then locked up again and showed Bill making the exact same speech he'd made only a few seconds before. The TV picture was no longer live – it was a recording.

Dawn of the Recorded Age

This was the holy grail for the American TV networks – the time difference between east and west coasts of the USA meant that there was no satisfactory way of showing a big show at peak time on both sides of the country. They either had to do the show live, twice or film it off a TV set (with a significant drop in quality) and show it again later. At this time, audio recording on magnetic tape had been around for several years. If they could only record TV like they could audio – that way, they could record a show when it went out live in New York and then just wait a few hours and play it back at the right time for Los Angeles. They could even record a show days in advance. A machine capable of doing that would transform the way TV was made. One of the firms which had improved and perfected reel-to-reel audio recorders was a company called Ampex. Like many other manufacturers, Ampex was trying to make a machine that recorded video.

Fred Pfost was one of the team of Ampex engineers who had been working on the project and who now found himself behind a curtain in that hotel room, operating the prototype VR-1000 Mark IV: "After I rewound the tape and pushed the play button for this group of executives, they saw the instantaneous replay of the speech. There were about ten seconds of total silence until they suddenly realized just what they were seeing... Pandemonium broke out with wild clapping and cheering for five full minutes... This was the first time in history that a large group had ever seen a high quality, instantaneous replay of any event... The experience still brings tears to my eyes when I recall this event."

A working, practical videotape machine was finally a reality.

Within days, the Ampex Corporation had $5million of orders. The first broadcast use of the VR1000 was by CBS in November 1956, of a progamme called Douglas Edwards and the News. Other networks followed suit very quickly and the BBC took delivery of its first Ampex machine in 1958. The 2" recording system, devised in the 50s, remained the standard right up until the early 1980s – so all the Morecambe and Wise shows, the Dad's Army episodes, even the video for Queen's Bohemian Rhapsody would have been recorded on machines which were the direct descendants of that Mark IV VR-1000 in the Chicago Hilton in 1956.

The 1980s was of course not the end of VTR. 2" tape was replaced by 1" tape. Although colour and the ability to edit electronically had been added quite early on, the new 1" system could now do slow motion and display still frames. Other manufacturers like Sony, RCA and Bosch had entered the market. Portable recorders appeared. Cassettes replaced reel to reel. Home video machines were launched and they sold in their millions. 3/4" tape came in, then 1/2”. Camcorders came on the scene. Composite video recordings became Component video recordings. Analogue became Digital. Standard Definition became High Definition. All that time, the way of recording the information, on magnetic tape running past spinning video heads, remained the same. It was perfecting those spinning heads that was Ampex's big breakthrough. The speed of the tape going past the recording head had to be much faster than was needed for recording audio. Other attempts, most notably the BBC's VERA machine, used fixed heads and just ran the tape suicidally fast instead. The Ampex system had the heads moving as well as the tape, which gave them the speed they needed to put lots of information down in real time.

Sony, the last manufacturers of videotape recorders, recently announced that they would not be making any more videotape machines. Eventually, everything will be stored as a file, on a disc or in the cloud. So now is a good time to salute and remember Fred Pfost, Shelby Henderson, Ray Dolby, Alex Maxey, Charlie Anderson and Charles Ginsberg, those clever Ampex engineers and that demonstration which caused such a stir in Chicago 60 years ago.