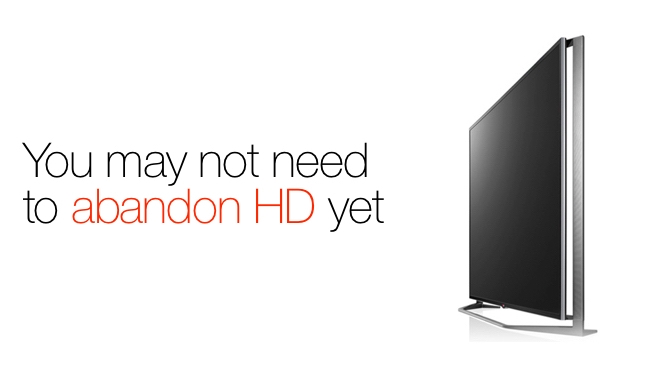 Good HD can be better - much better! - than bad 4K

I’ve written about this before, but I keep seeing examples where mediocre 4K compares poorly with very good HD. It’s really important to understand that with any standardised resolution (SD, two types of HD (720p and 1080p) and 4K (UHD)) so much depends on how the material was made and - actually even more importantly - how you’re seeing it.

Here’s a silly little example. The other day I was watching a film on the television with my family. It was Billy Elliot, the story of an 11 year old boy who develops a passion for ballet dancing in the midst of growing up in a strife-torn northern English mining community. A great film indeed; but the point is that it looked great too.

I wasn’t sitting in the best position, and was watching at an angle of probably fifty degrees to the perpendicular. I came into the room late and missed the beginning of the film, so I didn’t know what medium I was watching. It would have been satellite, iTunes, Netflix, Blu-ray or DVD. From my slightly awkward position, it looked like HD. It really looked pretty good.

When I asked what we were watching, someone passed me the sleeve - of a DVD, which means, of course, that it was only SD.

I had forgotten that a well mastered DVD can look remarkably good when it’s upscaled by the player and shown on a decent screen. Probably if I’d been sitting right in front of the TV, I would have realised that it wasn’t true HD, but, at the same time, SD terrestrial digital and satellite channels on the same TV looked a lot worse than this.

And that’s the point. It’s all about bandwidth. Of course, adding copious bandwidth (which is effectively what you get with the disk-based formats) doesn’t add information to the original image, but what it doesn’t do is throw the vast majority of it away.

The first time I ever saw studio-quality SD (recorded direct from broadcast studio camera onto a Digital Betacam recorder), the gap between how it looked and what I was used to watching at home on the television was about as big as the gap between SD and HD as received over the air in the living room.

Blu-ray is a fantastic format, because it looks so good! When you watch a well-mastered Blu-ray, it’s hard to imagine why you might want an even better resolution.

A friend has just bought a cheap(ish) 4K (UHD) TV and is watching Netflix 4K (UHD) programming over his very fast broadband. Apparently it looks fantastic. But I bet that if you compare it (on his 40”) screen, it will be either worse-looking or indistinguishable from Blu-ray HD.

This is not to say that 4K is no good, nor that it is pointless. Just that, done well, HD (which most of us have only had in our living rooms for less than ten years) still has a lot of life left in it. To the extent that we shouldn’t all leap blindly into 4K on the possibly questionable assumption that it’s going to be noticeably better.

There are undoubtedly some amazing 4K cameras out there, and, for future-proofing, there’s certainly a persuasive argument that we should be acquiring video in 4K now. But bad 4K looks worse than good HD. Don’t forget that 4K isn’t four times the resolution of HD; it’s actually only twice the linear resolution. You only have to miss perfect focus, experience camera shake or vibration, or compress badly, to be relegated back into the HD zone or worse. Get all these things right, and you’ll have 4K that is noticeably better.

But - and it’s an important “but” - to see 4K in a realistic light, you really do have to have a big screen and sit quite close to it. Picture yourself sitting at the optimum position from your HD set, and then imagine having a set with four times the area, or twice the linear dimensions. Then, and only then, will you be truly comparing 4K with HD.