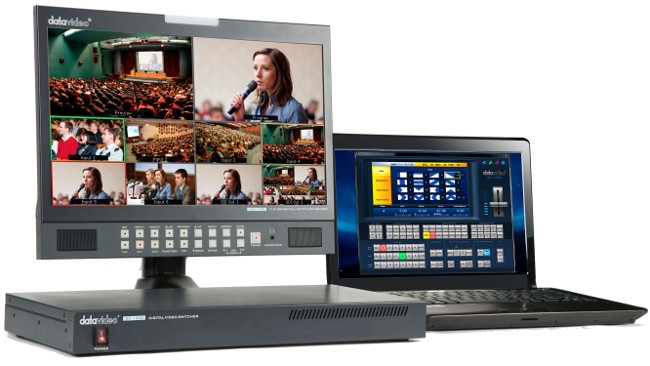 Datavideo has a new switcher that may take the role of the vision mixer away from the set. By Richard Payne

Vision mixing is a real-time process: cutting between different cameras and video sources requires precise timing. This is why nearly all vision mixers are operated on-site, with the production desk connected by zero latency SDI cabling. Sending video sources to the switcher over longer distances just isn’t an option – video cables can only stretch so far and converting signals for transmission over IP networks has always meant the kind of video delay that makes live switching impractical...until now that is.

It can remotely switch 4 HD-SDI and 2 HDMI inputs, from another room, another city or even another country. I didn’t believe it was possible, until I started switching cameras set up in Manchester from my home near Brighton 250 miles away.

Its clever trick is not just to have remote control panel available over networks and the internet, but also to have a really low-latency remote multi-viewer streamer built-in too, so you can see all the sources live. If that’s not impressive enough, the unit also offers high quality chromakey and costs under £1000.

The bitrate required is low. Producers can just piggy back on existing internal IP networks. With this set-up, there’s no longer any need to run SDI cabling down corridors and through walls. And for programs that are being produced many miles away from the action, the multiview can be sent over the Internet – again at very low latency.

When would you use a switcher where the director isn’t in the same building? How about a 24/7 shoot in a vet’s surgery? Or a week-long conference taking place in Doncaster? In these scenarios, a team of directors can be employed, each taking a shift vision mixing, but without the need, expense or hassle of re-locating them to the venue. In fact, with the SE-1200MU, each director can access the system, in turn, from his-or-her own home.

The SE-1200 has 2 HDMI and SDI outputs too, so you could display the mix on a big screen live at the venue while recoding and streaming through an encoder, such as Datavideo's own NVS-25 H264 encoder or a similar product. Of course, when it’s an event your director can physically attend, you can switch the system locally like a traditional vision mixer, but the real value of the SE-1200MU is, of course, in its remote switching capabilities, which opens up new possibilities to consider when planning your next live video production.