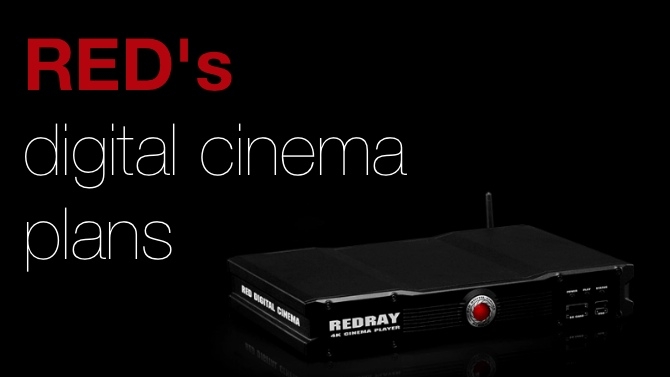 A day is a long time in digital video technology. And what we now know is that the battle-lines have been drawn for the fight over 4K delivery. Is this simply a squabble between obscure and proprietary systems, or the end-game in the democratisation of cinema that started with the RED One, and blossomed into the plethora of affordable cameras that start with DSLRs and go all the way up to the new Sony F55?

On Friday, 30th November 30th, we reported that what we believe is going to be the successor to Blu Ray, Sony's as unnamed 4K delivery system, is going to be bundled ("loaned" according to Sony) with their new 4K 84" Bravia TV. A long list of 4K feature films will be pre-loaded so that early adopters of the 4K system will have something to watch on their $25,000 TVs.

We said that this was clearly the way ahead: a box near the television with a big hard disk and network connectivity for broadband delivery of 4K content.

And now, virtually at the same time as Sony's announcement, RED has revealed not just a 4K player, but an entire 4K delivery system that is the biggest land-grab we've seen yet for 4K distribution territory.

The scope of RED's system is breathtaking, and if their announcement were from almost any other source it would be greeted with something approaching total scepticism, but this is RED, and their entire history is based around seemingly outrageous claims that later turn out to be true.

The RED 4K delivery system, which based around an Over The Top (OTT) technology called Odemax, promises nothing less than a complete alternative not just to home delivery for high resolution content, but for cinemas as well. OTT means that content is delivered over broadband networks and not using dedicated cable TV techniques.

We understand that Odemax, which is a separate organisation set up by long-term RED associate John Farhat, will allow 4K content to be delivered securely to RED's REDRay Cinema Players, and that the terms of use of the material can be set to control how many times and for how long the content can be viewed.

We'll come back to Odemax later, but first, some details or RED's Cinema Players.

The player hardware has multiple HDMI outputs including one dedicated to 7.1 channel 24 bit 48 KHz audio, and a group of four designed to drive four HD monitors arranged in a block to display 4K content - ideal for shop and exhibition displays.

REDRay supports 4K 3D playback at 48 and 60 fps). An iOS app is available from the Apple App Store that allows users to manage their 4K content and control playback remotely.

REDRay is available for Pre Order from Red now at $1,450.

We think these developments are extremely important. It's very easy to dismiss 4K as so high-end that it's irrelevant to typical viewers. But while it's anyone's guess how long it will take 4K to reach the mainstream popularity that HD has now (and we think it will be sooner rather than later), the fact is that everybody goes to the cinema, and for many people, the experience isn't great. Cinemas are crowded, noisy, expensive places to visit - and buying a snack to eat during the film can early exceed the cost of the tickets.

Perhaps the RED/Odemax initiative is just what's needed to level out the distribution landscape, so that very small to medium sized venues can show films in the same or higher quality than the established theatres - RED's new laser-powered cinema projector completes the picture here (literally).

With lower distribution costs, small and independent film-makers will have a much bigger chance of having their works seen on a big screen.

In fact, if you add a social aspect to all of this, you can even imagine audiences voting for which films to watch next as they're on their way to the cinema.

We eagerly await Apple, Google and Amazon's response to this.