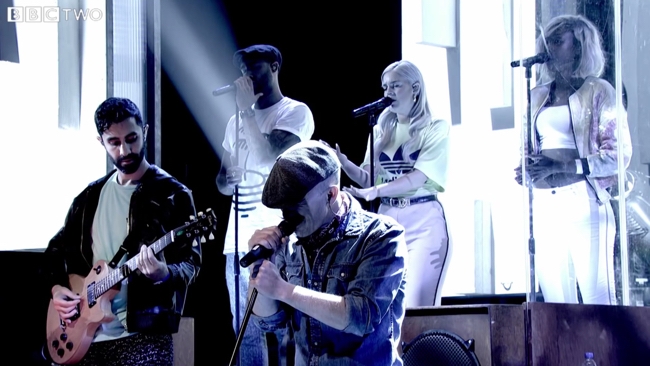 Getting a "look" right is traditionally thought of as something you do in post. And you definitely wouldn't expect a quite strong look to be applied to a multi camera live TV shoot. But that's exactly what the BBC has done in this performance from Jool's Holland's "Later... with Jool's Holland" from BBC 2 on 19th May 2015

Live video effects have been around for as long as television. In the early days, many of them were unintentional! The arrival of colour (in 1957 in the US and ten years later in the UK) meant that producers could go wild with sparkly, colourful fantasies that very much defined their era. The UK weekly pop music show, Top Of The Pops, was absolutely the best way to put a newly acquired colour TV though its paces, reminding you that there was never, ever going to be a way back to black and white.

But that was different. It was entirely effects-based. The brighter and louder the better.

But this performance by the UK Drum and Bass band Rudimental is unusual and, in its own way, groundbreaking (although there may be plenty of prior examples that we haven't spotted). The BBC has definitely applied a look. It's desaturated and very contrasty. Almost a bit "bleach bypass" a la Minority report.

The lighting helps too - unusually highlighting the top of the lead singer's head, to very good effect.

To me, this says that with high definition and a greater sense of expectation from audiences, live TV is upping its game and working on the look as well as the lighting and camera angles.

It will be fascinating to see more of this stuff.

(And If you like moody images, and a bit of drum and bass, this is the video for you.)