Why consumer televisions mangle great images...and what manufacturers can do to fix the problem 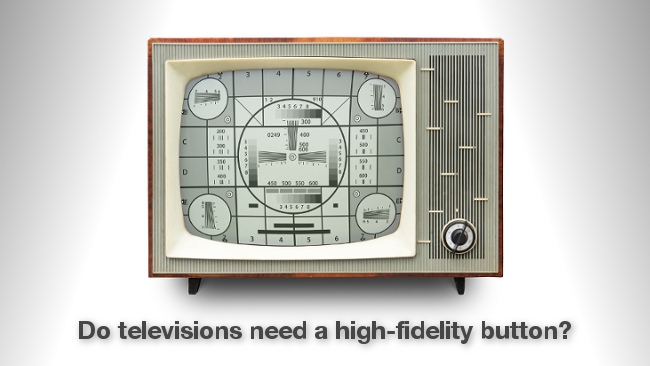 Given all the effort and expense spent on making impressive visuals, it's a bit of a waste when you consider the woeful state of image fidelity on consumer televisions. The answer to this problem requires an adjustment...of attitude. By Roland Denning.

Given all the effort and expense spent on making impressive visuals, it's a bit of a waste when you consider the woeful state of image fidelity on consumer televisions. The answer to this problem requires an adjustment...of attitude.

There has been much discussion on these pages of what cameras can make the best pictures – the subtle beauty of shooting on film, the advantages of originating in 4K, the great potential of HDR – it's easy to get excited over the vast options available to filmmakers and productions. Then, you go into people's living room and see the picture they are actually watching...and weep.

But this is not a piece complaining about ignorant end-users; my argument is that TVs are more-or-less designed to invite the user to fiddle and seriously screw up the picture. For consumers, there is no obvious way to ensure the picture on the screen is as close as possible to what the programme maker intended. What they have instead are their own options.

There were a few complaints recently about the BBC's Wolf Hall, particularly that it was so dark in the shadows you 'couldn't see what was going on'. Wolf Hall looked fantastic on my TV, but I can understand that if you had the contrast ill-adjusted, you might have lost a large part of the picture. This is an interesting moment – we have moved away from the principle that TV lighting should be conservative and high-key, so it can work on any TV in the world; now, we accept that, on TV as in life, it can be difficult to see things in the dark. This is a good thing, but it does depend on the receiver at home being set up properly...and very few are.

Your right or mine?

You can't blame consumers for wanting to adjust their TVs - they've paid for them and can do whatever they want with them. If they really want a Nordic-noir thriller to look like over-saturated light entertainment, that is their choice. But my argument is the actual design of modern televisions encourages the notion that 'the right picture' is purely a matter of personal preference.

I have a mid-range, current 42" TV. Yes, there are default settings – in fact there's four of them: normal, dynamic, cinema and 'true cinema' – does that mean the previous setting is 'false cinema'? And who wants to be 'normal' when they can be 'dynamic'? Then, there is the 'custom' setting. The amount of control offered is immense: backlight, contrast, colour tint, sharpness, colour temperature, vivid colour, adaptive backlight control, ambient sensor, noise reduction, etc. Then, if you go into 'advanced settings', you have seven more: adaptive gamma control, black expanded, clear white effect, white balance. Then, there are two options that break into sub-menus: colour management (individual hue, saturation, luminance settings for each for the three primaries) and gamma adjustment, again for each of the primaries. And that's not considering the settings for screen ratios, audio and the rest.

It's great to have so much control over the picture, but what are you supposed to do with it all? If you don't have specialised test equipment, my advice would be 'as little as possible'. I have spent enough hours in telecine and online suites seeing pictures I've shot myself graded, that I feel I have some idea of what pictures should look like, but I still shy away from messing with most of this stuff.

I was astonished to find on Amazon that a customer had reviewed my very TV and produced an elaborate list of settings that he said were 'correct' – he gave no idea where these settings were derived from, nor what viewing conditions they were appropriate for. He also added the rather bizarre statement that 'the picture might look odd at first, but you'll get used to it' (yes, it did, and no, you shouldn't). I realised there is a whole sub-culture of TV fiddlers with arcane notions of what 'the correct picture' is and you can buy DVDs with special glasses to adjust the picture to some bizarre notion of perfection which has little relationship to how people work in the industry.

In the world of hi-fi, 'serious' amplifiers tend not to have treble or bass controls (or at least have a button to bypass them) on the principle that the system is designed to reproduce the original recording as accurately as possible (we could argue that is not actually the case for much hi-fi gear, but I feel we are edging into dangerous territory). It's not quite the same for a TV. Some like to watch in near darkness and others like well-lit rooms so some adjustment is necessary, but this is the equivalent of a volume control on a hi-fi amp. But most of the settings on my TV will do nothing other than to distort or degrade the original image - and most of the others cry out for either a qualified engineer working or an experienced colourist for configuration.

I am not alone in this; there is currently an online petition aimed at getting rid of motion interpolation as a default setting. And I understand the reasoning: why should we expect the average consumer to know that maybe 'smooth motion' is not a good thing if it has been promoted as a 'feature' by the manufacturer?

In the 21st century, we should be moving away from the idea that the way to sell a technology product is to offer as many options as possible. It was one of Apple's great breakthroughs to simplify devices so their functions match the way we actually use them.

There is a need for an attitude change. It would be great to see television manufacturers follow the hi-fi world and market their products as being as accurate as possible to the original picture (or at least make it a clear option to watch a picture as close as possible to what the producers intended).

Instructions provided with televisions are woefully inadequate at giving the user any idea of what the controls actually do. At the very least, TVs could have a factory-set 'high fidelity' button, with perhaps with a couple of options for viewing in well lit or dimly lit rooms, and designed to be as neutral and accurate as possible. Of course, we could go much further than that, but let's start by trying to promote the notion that the 'best' picture has more to do with accuracy than taste.