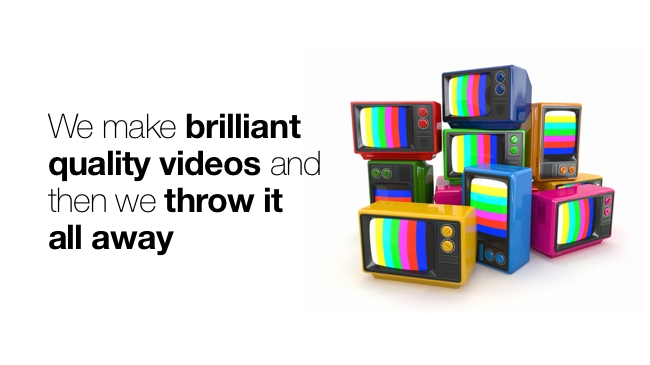 Replay: Why do we even bother shooting high quality footage when satellite and terrestrial broadcast compression throws it all away?

I've written about this before but it's such a significant thing that I wanted to mention it again. I know I'm not the only one who's noticed this because the person that brought up the subject in conversation this morning was RedShark's European Editor, Andy Stout.

What are we talking about? It's the quality - or lack of it - in broadcast video. It's the fact that whatever due care and skill you lavish on your production, by the time it arrives in peoples' homes, it will look as through it's gone through a cheese grater.

Now, it's actually quite a bit more complicated than "if it's broadcast, then it looks terrible". Certain channels don't look too bad, while others - supposedly HD - look as though they are made out of flickering tiny Lego blocks.

And the reason for this is bandwidth. Quite simply, the pipes we use for delivering broadcast content are typically not big enough. This is not because of some limitation of the technology. If there was only one global channel, we could see it almost perfectly - because it wouldn't be competing with around three hundred other channels.

It's all too easy to get back to HD

I suspect that this is at least part of the reason why so many people don't seem at all excited by HD, and even fewer by the prospect of 4K. The simple fact is that while 4K looks wonderful in a cinema, or in a grading room, it might not even be 4K at all by the time it's delivered to the living room. Think about it: 4K might have four times HD's pixels but it only has twice the linear resolution. You don't have to degrade it much to land back in the world of HD, or even worse.

You can of course argue that like-for-like, 4K will be an improvement over HD, even if they are similarly degraded. But that isn't the point, is it? That we should be adopting 4K so that we can see true HD? Imagine that as a marketing campaign.

After years of talking and writing about HD and 4K I think the picture is getting a little clearer for me (I probably could have phrased that better!).

We live in a world of multiple resolutions and  - here's the thing it's easy to forget - multiple screen sizes.

For something the size of a watch (yes, we also live in a world where watches can play video), then it's hard to argue that SD isn't sufficient. Any more would probably run the battery down and that's something the watch manufacturers are trying to avoid above all else. But there isn't enough space on a watch screen to appreciate HD.

For mobile phones, which, incredibly, now come in screen sizes up to about six inches, then HD is probably good enough. Any more than that and you're wasting processing power and, again, the battery.

Tablets and laptops would probably benefit from 4K. Not by much: Apple's "Retina" displays are already pretty amazing, but you could conceive of a better image on larger tablets, especially when rendering diagonals. If you like the quality of HD you're getting on your current HD screen, then you will probably only need 4K if you get a much bigger one. A screen four times the area (not size!) will look the same in 4K as your original screen did in HD.

Will we ever need 8K? I'm talking here about display, not acquisition and post production. In my view, we will only ever need to display 8K in cinemas and when you have a screen the size of a wall in your house, and you sit closely to it.

So, going back to the issues with broadcasting HD and 4K, I recently saw a Blu Ray of the extended version of Avatar. There's about 40 mins of extra material in there. It was very good. But what was amazing was the quality - in HD. On a 42" set, I couldn't fault it, but what I could do, was compare it with material that I receive over satellite and terrestrial digital.

It pains me to say this (and, remember, as I said earlier - it's only a matter of the bandwidth that the broadcasters decide to allocate to a channel) but for me there was a bigger difference between broadcast quality HD and Blu Ray HD than between any comparison between HD and 4K that I've ever seen. And I'm a fan of 4K!