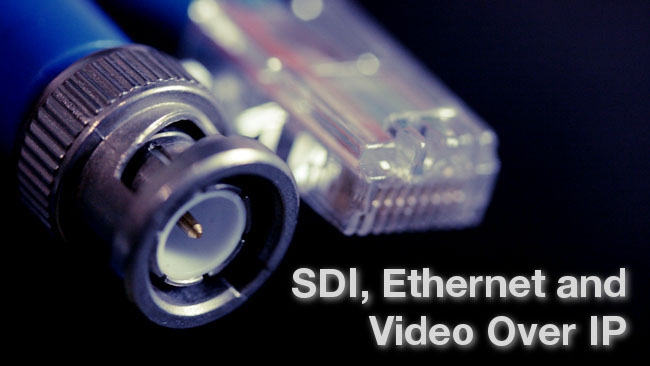 SDI, Ethernet and Video over IP

Ethernet is more flexible than SDI. What's to stop it taking over completely in TV studios?

One of the defining technological characteristics of the late twentieth century was convergence, the transition of a wide range of techniques, previously used on a wide range of hardware, toward a single hardware platform. The 1980s and 1990s, for instance, saw this happen to audio editing, which mainly used quarter-inch tape decks, as well as printing and publishing (which used photographic techniques), engineering and technical drawing, banking and many other fields, all of which, of course, ended up being done on computers. We sometimes flatter ourselves that video production and editing, particularly at the levels required for feature film production, was a comparatively late adopter of the transition to desktop workstations, possibly because the data sets are very hard work. However, generally speaking, none of this is new.

What is fairly new is the ability of computer networks to handle high-bandwidth video. It's necessary at this point to define what high-bandwidth really means. The phrase 'video over IP' has been used for a while, in the context of a heavily compressed adjunct to voice chat. Companies like Evertz and Elemental, who are big players in the emerging field of Ethernet as a full-quality studio interconnect, seem to prefer terms like 'software defined video network'. Either way, the approach is the same: to take video frames from (usually) an SDI source and convert them for transport over a high speed (typically ten-gigabit) Ethernet network.

In one sense, this is relatively trivial; all that's happening is the repackaging of a SDI payload into a series of Ethernet frames. It's a stream of digital information in one format being converted into another format. The detail, of course, is somewhat more complex. SDI is a relatively straightforward point-to-point interconnect with no routing capability that accepts data packaged in a fairly narrowly-defined set of formats. Ethernet (or at least Ethernet plus the Internet Protocol standard that is used to route data worldwide) is a general-purpose computer networking protocol with advanced routing capability which can accept anything that can be represented as digital information.

This flexibility is part of the reason that software-defined video networking over Ethernet and IP is attractive, particularly in the context of large studio installations. SDI video routers capable of connecting a variety of inputs and outputs together under software control do exist, but the level of flexibility and capability is nothing like that provided by IP networks. A single ten-gigabit Ethernet link can carry several streams of 1.5 gigabit SDI video (or even a combination of HD and SD formats at various frame rates) in a way that SDI simply doesn't know how to achieve. From a cost benefit perspective, installation of Ethernet hardware (cabling, routers, etc) might be viewed as a more straightforward piece of information technology infrastructure than the task-specific technologies it replaces. What's more, IP networking provides a back-channel; video can flow from camera to studio, while talk-back, cueing information, device control and return video can go back the other way.

Needless to say, the situation is not entirely straightforward. Currently, the very high performance Ethernet hardware required to do this well is expensive, sometimes about as expensive as doing the same job in SDI, under some circumstances. The hardware needs to be a lot more intelligent than a simple SDI router, given the complexities of a fully-switchable routed network. The upsides of it, however, can be considerable. It might be possible, for instance, to connect any production control room to any of several studios using a combination of SDI routing and other technologies. But it's a lot easier to do with Ethernet, so that a control room doesn't have to sit idle while, say, a set is being built in its studio.

Anyone who's attended a major industry trade show in the last couple of years must have seen the signs of this transition in progress. While ten (and soon forty and one-hundred) gigabit Ethernet equipment is still expensive, the phenomenon of convergence that we talked about earlier should ensure that prices fall. Not so long ago, one-gigabit ethernet was expensive, but now it's standard on more or less all computer equipment. It's worth being clear here that, despite the claims of hyperbolic advertising that 'SDI is dead', the advantages of broadcast video over IP are most apparent in permanent installations or perhaps outside broadcast trucks. There is no immediate or even medium-term prospect of seeing field production units using Ethernet to connect a camera and a monitor on location (this sort of application is probably more likely to go wireless). Ethernet connectors and cabling are not designed for frequent insertion and removal; the equipment is not sufficiently ruggedised for field deployment. While these issues could be addressed, the advantages aren't really sufficient in this sort of circumstance to make the development work worthwhile. SDI is not dead and isn't likely to die soon.

Even so, the idea of a studio camera, a switcher or a monitor having an IP address is probably not that far away from reality. Currently, SDI converters to-and-from various IP networking protocols are required, but it's easy to imagine that the next couple of generations of studio cameras would start to implement this directly. This sort of approach is already widely used where high-bandwidth IP connections are already competing fiercely with satellite time for live outside broadcast applications. The constant growth in installed networking capacity should make for continuous improvement in this regard. The biggest current problem is that various manufacturers' approaches to wrapping video for transport over IP are frequently incompatible, a problem that SDI doesn't (or at least, doesn’t often) have. Standardisation efforts exist, but implementation is patchy, and this needs to significantly improve.

Perhaps the most entertaining possibilities in this regard are wireless. GSM-based data links, adapted from cellphone technology, are already being used to transport good-looking video. The key thing about IP networking is that the network doesn't care what the transport medium is. Advances in general networking become directly applicable to production work in a way that the broadcast industry could never afford to research and develop on its own.