Did Sony just reveal the next Blu Ray? 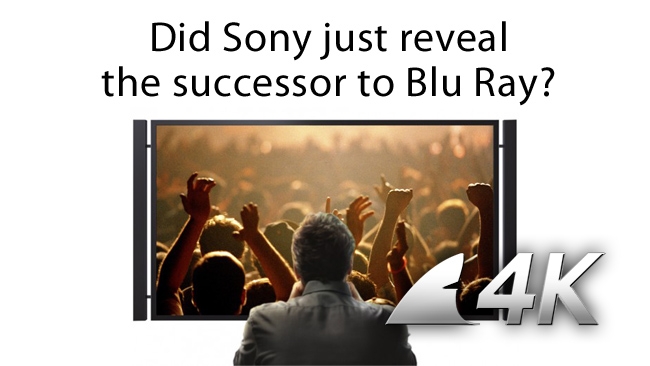 Well, this is fascinating.

Revealed in Sony's blog is not just that the Sony Bravia 4K 84" TV will upscale HD to 4K using a dedicated chipset (that's not surprising) but that it will come with what Sony describes as "the world's first 4K Ultra HD delivery solution, complete with pre-loaded, native entertainment". This will include "full length feature Hollywood productions".

What we can deduce from this is that this 4K delivery system will include some kind of storage - so it's not just a streaming solution. It could perhaps be a system where content is delivered over broadband and cached on a local drive, a bit like Apple TV. It really does sound like some sort of successor to Blu Ray but not necessarily based on an optical drive format. Don't forget that Sony was the first to get Blu Ray players onto the market with the PS3 games console. Maybe the delivery system will be linked to the Playstation Network.

Here's the whole text of the blog post from Sony's Ray Hartjen. Make of it what you will. And expect an official announcement shortly after Thanksgiving.

Okay, I know what you’re thinking – What about 4K content, right?
Now, if I answer that question with the old “chicken and egg” scenario about introducing any new technology, you’ll just tune out. So, I am not going to that, and instead, I’ll answer the question in two parts.

First, the XBR-84X900 has a three chipset solution that incorporates Sony’s proprietary and critically-acclaimed X-Reality PRO picture engine and upscales video content to near 4K quality. That’s right, the programming you currently enjoy, whether from cable/satellite or even your favorite movies on Blu-ray Disc, will be upscaled to an even higher resolution. The thousands of Blu-ray Discs already published have instantly gone from looking good to looking phenomenal.

Secondly, while 4K Ultra HD broadcasts aren’t the norm yet, you have already been viewing the first broadcast applications. At one of its NFL games each week, Fox Sports utilizes a Sony 4K F65 Cinealta camera to capture footage for instant replays. When the network enlarges the video to get an up close look at say a receiver tiptoeing a sideline, the video naturally loses resolution, common to enlarging any photo or video. But, with 4 times the resolution of Full HD, 4K has more than enough resolution to spare, and losing half still provides the best picture possible.

Still not a good enough answer? Yeah, I get it, and I don’t blame you. Sony blog readers are way up the discerning scale as far as technology news goes.
So, do me a favor – look around. Make certain no one is looking over your shoulder. I have something to tell just you.
Sony makes 4K projectors for the home and cinema, 4K upscaling Blu-ray Disc players, and 4K Ultra HD televisions. Sony also makes 4K professional cameras for production studios. Plus, Sony has its own studio – Sony Pictures Entertainment (SPE) – that turns out 4K production every day. Do you really think we’d leave our 4K Ultra HD TV customers hanging?

In the next couple of weeks, the XBR-84X900 television will ship to customers who placed pre-orders since the product introduction in September. As an extra bonus, included free with the purchase will be the world’s first 4K Ultra HD delivery solution, complete with pre-loaded, native 4K entertainment. Not some goofy 4K content shot as a demo. I’m talking full length feature Hollywood productions, and available exclusively to purchasers of Sony’s 84” 4K Ultra HD TV.
I know, cool, right?

Okay, I can’t say anything more right now, ‘cause my boss probably already thinks I’ve written too much. But, stay tuned for an announcement sometime after turkey day. 4K Ultra HD fans will be stoked.