Does 4K have a role in News and Journalism? 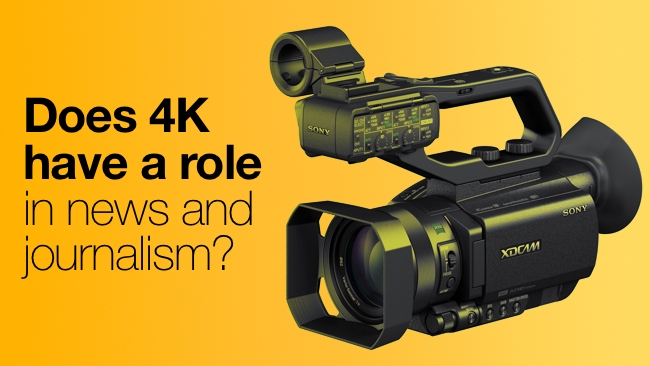 Does 4K have a role in news and journalism?

Will 4K be used for news gathering? No. But on the other hand, yes

With most news, you don't get a second chance. Typically, you can't ask a criminal to run away from the crime again, or for a bomb to explode a second time. An athlete who's just run 100 metres won't do it again because there's a bit of motion blur.

For news photographers and video camera operators, the camera they choose is the one that they know is going to get the shot. They don't take chances.

And this is probably why you don't see so many DSLRs making videos in trouble-torn areas of the world. It's partly because - unless you're taking still photos - they're not ergonomic, but also because, with their gigantic sensors, they shoot with an impossibly shallow depth of field.

With large sensor cameras, it's so easy to get the focus wrong, and so hard to get it right. In ideal conditions, like a photo studio, you can keep shooting until you get it perfectly. You can put the camera on a tripod, measure the distance to the subject, and get get focus as precise as you need to.

In a war zone, you want to be able to point, shoot, and then, probably, run.

So cameras with smaller sensors are still the choice for news camera operators. With a depth of field measured in feet and not inches (or fractions of an inch) you can think more about composing the shot, and living to tell the day, than pulling focus. 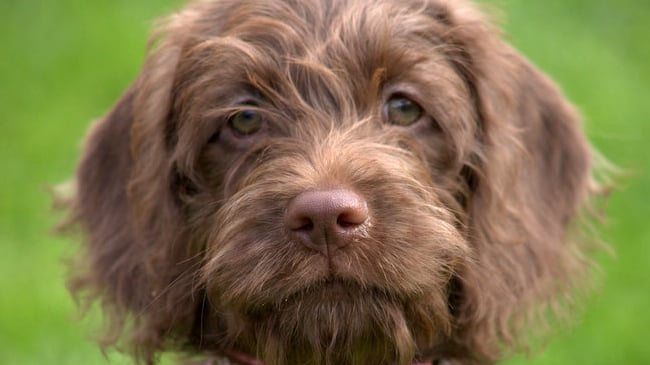 This would have been a nice shot if it was in focus. Taken with a full-frame camera and a 300mm telephoto, the dog's nose is sharp but the eyes are blurred.

News shot in HD has made a difference

News shot in HD has made a difference. There's a sense of visceral reality when you see a report from a far-flung place that's in HD. You're drawn into it in way that SD can't give you. Most ENG-type cameras are now HD and it's a genuinely worthwhile enhancement.

But most 4K cameras have large sensors, and this is an almost hopeless set-up for news camera operators. At the very least, having the camera stable enough to benefit from 4K will be an utter rarity. Remember that less that a pixel-width of shake will reduce 4K footage to "mere" HD.

Have a look at this picture. The autofocus has zeroed-in on the dog's nose. The eyes are out of focus. Of course a dog is always going to be jumping around but with a depth of field measured in inches - or less - the chances of a nicely focused picture are minimal.

And it's even worse with 4K.

If you shoot in 4K with the aim of downsizing to HD (a very good thing to do in my view, if your workflow an infrastructure support it) then it doesn't matter so much: it's not going to look any worse than shooting in HD in the first place. But grabbing tightly-focused shots in 4K when you don't have control over, well, anything, is asking for trouble.

And it's not just focus. What will apply to absolutely any camera that shoots 4K is that if you want to delver in this higher resolution, then you're going to need four times the storage and four times the bandwidth. When you're in the field, perhaps shooting in a war zone, I would say that's definitely an issue.

Not completely open and shut

It's not a completely open and shut case though.

Shooting 4K in a news situation can be a very good thing if your footage is going to be broadcast in HD and the editor needs to zoom in. Assuming your shots are in focus (which you actually can't assume - see above) then the editor will be able to pick out details and fill the screen with them, giving a degree of flexibility that wouldn't be available without 4K. And if the package is going out in SD - well, you could, in theory, zoom in sixteen times.

All of this is, of course, subject to the limits of your camera and its lens' resolving power.

I think the answer to this conundrum is that there is never any harm in shooting in 4K. If you're not going to use all that resolution, then nothing is lost.

Except, you might say, the cost of the equipment and the bandwidth to get the material back to base.

But just because you've shot in 4K doesn't mean you have to transmit it over an expensive line in 4K. Many cameras are equipped with transcoders and downconverters. I think we're a long way off the time when anyone is going to complain that they can't use that footage you've just caught of a plane landing in the Hudson River because it's not cinematic enough.

Take it back to base

What you can do, is take your original 4K footage back to base when you go there, personally. It may not be available for live transmission (or near-live) but your news organisation can put it in the archive in 4K, and it will be available in this higher-quality format for historians and documentary-makers in later years - or even for weekly news programs that sum up what's happened in the last seven days.

I think there are two quite separate arguments here. One is about sensor size, and we already know the answer to that - the bigger the sensor, the harder it is to focus. That's true for HD and significantly worse for 4K.

The other is about whether you should use 4K at all in a news environment. And here, you don't have to make a choice at all, if you're careful.

You can take it as given that most new cameras coming out in the next year or so will feature 4K. Some, like the Sony PXW-X70 are 4K upgradable - so you don't have to pay for this increased resolution unless you need it. (By the way, the PXW-X70 is an interesting case. It's very small, has high bitrate XAVC recording, and has a sensor that is large by ENG standards, and small compared to "cinematic" cameras. So you have the choice between mildly shallow depth of field and a much deeper depth of field, depending on your aperture settings. The sensor has a very high resolution, 20 megapixels, and the camera uses all the pixels to derive its HD and 4K output (in other words - without line-skipping).

But virtually all will offer an HD output as well.

You could argue that recording in 4K is more expensive, which it is, like for like. But the cost of flash memory continues to plummet. Moore's law will take care of this. Flash memory is tens of thousands of times cheaper than it was just a few years ago, and that trend still has some way to go yet.

And then, whether you use 4K or not, will be entirely up to you.