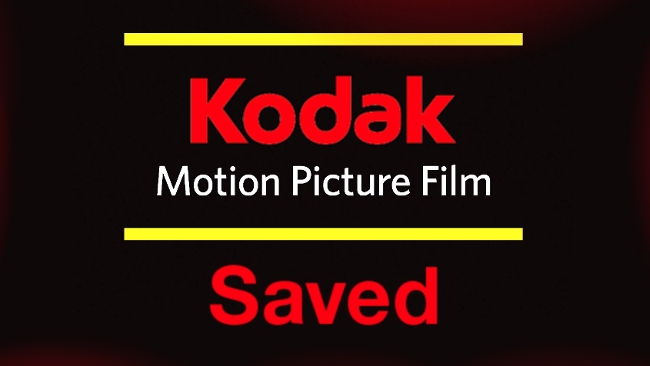 Kodak, and the photochemical film business in general, has been reeling of late. But a recent deal ensures many more years of 'real film'. RedShark Technical Editor Phil Rhodes reports and gives commentary.

The fact that the use of photochemical film in filmmaking has dropped off enormously is, regardless of anyone's nostalgia for the stuff, as clear as glass. What's perhaps less well known is the enormity of the degree to which this has occurred, with Kodak's sales of film falling off from an all-time high of over twelve billion feet in 2006 to under half a billion now, a decline which might reasonably make even the most steadfast corporate executive reach for the metaphorical ejection handle.

The fact that Kodak is still making film is impressive enough; the business unit of the company, which does this work, is not expected to be profitable this year. Kodak itself is recently-emerged from a twenty-month bankruptcy, which itself had people very worried that the end of film was nigh.

So, it's become increasingly difficult to ignore the writing on the wall, and Kodak's fortunes seem to have been moving in parallel with its flagship product. What we didn't previously know was that recently-employed chief exec Jeff Clarke had been courting a deal with the studios which would make them investment partners in the film manufacturing business. This, perhaps predictably, didn't work out, although something else did. Somehow – and it's difficult to see how – a group of prominent directors, including Quentin Tarantino, Christopher Nolan, J.J. Abrams and Judd Apatow, have persuaded the studios to make long-term orders for film stock, and that's stock they have no specific idea how they're going to use. The thought occurs that some shows may end up shooting film simply because the studios have a binding agreement to buy it.

So, much as complaining is fashionable, it's difficult to be jaded about this. It would have been possible, if not perhaps ideal, for the film industry to move entirely to digital acquisition over ten years ago. The financial success of Star Wars Episode 1: The Phantom Menace, which took over a billion dollars on a budget of $115 million, made it clear that audiences were prepared to tolerate perhaps fractionally iffy image quality (not to mention iffy writing) under the right circumstances. It is impossible not to be impressed, however, by the way that the film and television industries roundly rejected early, barely-good-enough attempts to usurp photochemistry. The new Star Wars productions are turning real 35mm film at the time of writing.

Overenthusiasm is, of course, a contagious disease, and the truth is that the cost of indulging a director's or cinematographer's whim on a big production is, compared to the overall budget, no great hardship. Things might not be entirely perfect, even in the medium term; we have no idea whether Kodak's ability to keep the plant open will translate into wide availability of film, or whether the studios' commitment to buy a certain amount will limit availability for the rest of us. It'll still be reassuring if Ferrania can get some stock out of the door.

All this aside, it would be excessively ungenerous not to mention that some of the people who have made this decision, and by doing so facilitated the continued availability of film, are part of a much-maligned group of producers and production executives who have traditionally been the target of much lowbrow humour.