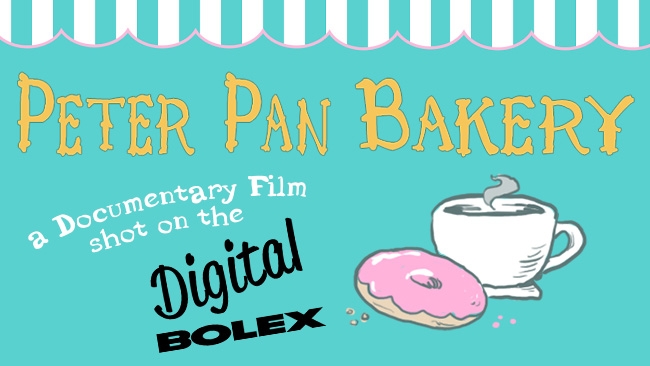 We were delighted by the wonderful response to the initial release of our documentary film Peter Pan Bakery! We were excited to share the stories of everyone who make the bakery part of their life. It was also a great deal of fun creating some early content with the D16.

After a great run online, we received the exciting news that the film would be getting a world premiere on the big screen at 17th Annual Brooklyn Film Festival.

The film had originally been finished for release on the internet, and we were satisfied by that. Yet, when it came time to start thinking about the Brooklyn Film Festival with possibly of others not far behind, we knew that a tiny Vimeo window was going to be a much different experience than a big screen at the cinema. Additionally, the festival also required an HDCAM copy of the film, which we were going to have to eventually create. After some contemplation, we decided to go back to the source materials and create a new digitally remastered version of the film.

We headed over to Technicolor-Post Works, NY and employed Sean R. Smith as Senior Colorist and Finishing Editor. After reviewing our deliverable requirements Sean set to work on conforming our edit to the original camera source materials.

It was decided that we would finish the documentary on on A Nudcoa Film Master, an advanced mastering suite designed by Digital Vision. The one draw back was that the software did not natively support CinemaDNG, so an automated process was used to "flip" the camera masters to the DPX format. This would allow us to keep them in a high-bandwidth format and take advantage of the latitude offered by the raw files.

I asked Sean if he had any difficulty in conforming the CinemaDNG files; "No complaints!" he responded "Once more software packages support CDNG formats the online/conform process will be much more seamless. Much like conforming DPX scans etc…" The only real cost was the time spent doing the conversion. On the plus side, since it was an automated batch process it was a "set it and forget it" situation.

After loading the edit into the Film Master and a conversation about the look and feel, Sean went to work. It's amazing to watch a master craftsman work his tools. Sean was able to dig into the uncompressed images and bring them out to their maximum potential.
The results are stunning! You can see major differences in the delicate manner the contrast is handled and the vibrancy added to the color palette. I haven't been more excited than when I watched the film on the big screen!

It was just around lunch time when the final deliverable, a Sony HDCAM tape at 1080 pfs 23.976, was cut - and celebratory meal was in order.

Here's our article on the making of the original film.