Laser Projectors. Here's how they work and why they're good - especially for 3D 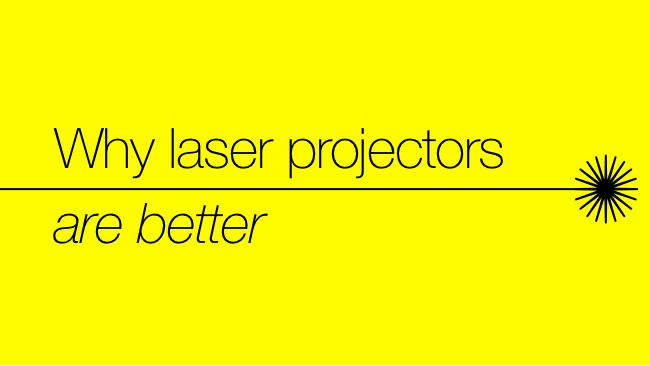 Why lasers are better

Lasers seem ideal for projection: pinpoint sharp and with the purest, most controllable of colours. And yet it's only now that we're seeing them in reality. And they don't work quite the way you might think, either

People have been using lasers to create video displays for quite some time, with the first patents registered in the late 70s in Germany. The field has since been reasonably quiet until the last half-dozen years, probably because a full-colour display – using any of the various available technologies – requires red, green and blue lasers. Red has been reasonably easy for a while, although green mainly relies on DPSS (diode-pumped solid state) devices using frequency-doubled infra-red lasers, and blue, at least as a commercial product in mass production, is not much older than Sony’s blu-ray disc technology. Prior to this, the only type tended to be gas-tube devices of considerable complexity and high power consumption, especially at the sort of power levels required for theatrical-grade projection.

The other problem with historical laser projection has been that it tended to use the perhaps most instinctive approach of scanning the image onto the screen much like a CRT. This creates some interesting problems regarding the high-frequency horizontal scan, which must be produced by a mechanical device. For a PAL standard-definition signal, this implies a mirror producing the horizontal scan moving at something not far from a million revolutions a minute, which is clearly impractical, and workarounds must be applied.

Modern  laser projection – characterised specifically as laser-illuminated projection – avoids these issues by using solid-state lasers as an unmodulated light source, relying on established micromirror technology to produce the spatial modulation. The current tech dates back more or less to the consumer electronics show in this very town in 2006, where Novalux showed a prototype display. Barco, Christie and others were all showing upscale theatrical projectors at NAB 2014 where I saw a demonstration by Christie. NEC has an alternative technology involving illuminating a phosphor with blue-emitting lasers, much like a “white” LED, which is suitable for intermediate-sized installations.

Close observers will be raising their hands at this point to ask why all this is actually useful. Xenon and metal halide lamp technology is very well established in projection  and has been for decades, and since the lasers in current projectors are used simply for their ability to emit photons rather than their special abilities as lasers one might reasonably raise the question as to how this all helps. There are also some regulatory hurdles based on the fact that large laser projectors are by their very nature rated high on various international scales for optical hazard, even though their output doesn’t actually consist of a collimated laser beam. The answer to these questions lies in two main regions: first, convenience, and second, 3D.

The convenience benefits are easy to understand. Solid state lasers are fundamentally extremely small LEDs, with an emissive region about the size of a bacterium. This makes for cooling challenges (the Christie laser rack their demonstration was emitting significant, though far from problematic, fan noise). Even so, given the ability to cheaply and easily replace fans, the technology is being touted as significantly longer-lived than traditional approaches. The life of a xenon projector lamp can be 1500 hours. Barco claim that their DP4K-60L laser projector has a life of 30,000 hours to 80% output, meaning that there will be no need to purchase and store expensive spare parts, and also removes the risk of handling fragile and potentially explosive high-pressure lamps. Furthermore, the absolute efficiency of the lasers is higher than the xenon lamp, which was always used for its superb colour rendering more than for its efficiency.

Perhaps the most significant advantage comes with 3D, however. Possibly the best techniques available for ensuring only one of the audience’s eyes sees each of the stereo images involve separated-primary techniques, where the two frames are projected using two different sets of RGB primaries separated by about twenty nanometers in wavelength. The audience wears glasses with carefully-aligned notch filters and each eye sees only the appropriate image. The advantage of this is both that the system can achieve very high extinction ratios, that is, the degree to which the image intended for one eye is visible as a ghostly edge in the other. Furthermore, the two stereo images can, given two projectors, be projected simultaneously. Conventional white screens can be used an there is no hot-spotting. Many of the traditional problems of 3D remain, of course, and with even the most carefully-produced material, six-primary 3D is as capable of causing discomfort and nausea as any other, but it’s perhaps the least problematic current technique.

The problem with this approach is that the ordinarily white light coming out of the projector’s light source must be filtered such that it comprises only the three narrow RGB peaks that match the transmission profile in the glasses filters. This is incredibly lossy, with under 20% of the light making it through. A laser projector, on the other hand, can use laser diodes which are specifically designed to emit the required wavelengths, and requires no filtering at all. Power consumption over a xenon or UHP projector of equivalent brightness is better in any case, but in these cases, it can be possible to produce bright 3D images which are almost impossible to match with more conventional tech. About the only downside – possibly apart from cost, which I’ve yet to investigate – is the issue of speckle, an effect created by the coherency of the light source. Techniques developed by current manufacturers mitigate this using careful combinations of combiner angles and polarisation, and the projected image doesn’t noticeably exhibit the problem.

The big manufacturers expect to ship tens of units this year. Various configurations are available, from separate laser racks with fibre-optic connection to the projection head to fully-integrated devices with everything onboard. The images don’t look particularly different to a normal projector other than that, especially with 3D, they’re an awful lot brighter.