China's appetite for 4K televisions is insatiable. It's a good job they're making so many of them. 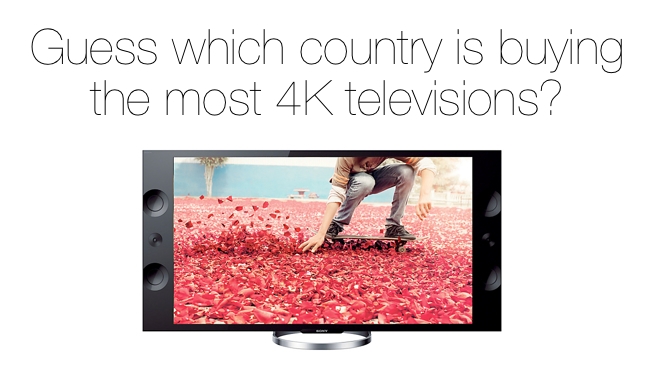 Where are most of the world's 4K TVs going to? America? Europe? Korea? Nope: it's China

We're starting to see significant numbers of 4K televisions in the shops. Not, perhaps in the majority of high street shops but in the bigger, plusher department stores, you'll probably see one or two premium models.

And that word "premium" is the key. These are expensive sets costing three to twenty times more than a typical "mere" HD television. So the numbers aren't big, but, we'd imagine, everyone has a little celebration when one of the 4K sets is sold, because there will be a decent profit in them for the stores.

Meanwhile, sets for only around 50% more than top end HD TVs have been available from China for some time. And that's probably why so many of them are selling around the world but especially in China. There are companies we've never heard of out there (like Skyworth, as you can see with their charmingly-translated text) that are making incredibly large numbers of 4K TVs, many of which have some impressive technology - but all aimed at the lower cost marketplace.

So what you don't necessarily see with the Chinese televisions is the sort of image processing and display technology that the top end Japanese and Korean models have. We saw a Sony set in a UK department store recently, and there were colours on the screen that we'd never seen on a TV before (very deep, powerful purples and scarlets), which is probably an area where the Chinese sets, using more conventional technology, don't excel.

According to Display Search, a surprising 84% of all 4K TVs were shipped to China: most of them from China, last year. 5% went to America, 4% to Europe and 3% to Japan.

So the pattern is clear: premium, luxury sets to US, Europe and Japan; more basic, lower cost sets to China.

But how many Chinese sets are actually available other regions? Not many. And that's probably skewing the figures. We suspect that there are plenty of people who would like to try out 4K for only a slight premimum above HD set prices, and that they won't mind if they're from a (to us) "no-name" brand. The market in 4K computer monitors alone must be pretty significant.