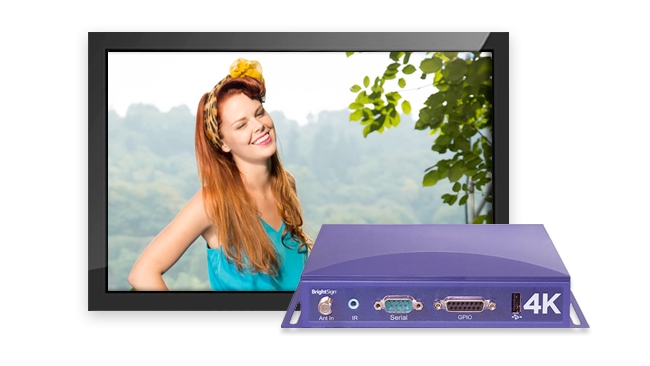 4K starts to rival the resolution of print. There will soon be a high resolution moving poster near you

4K has a perfectly natural habitat outside the living room. Screens are now big enough to rival printed posters, and, while there's a huge gulf in price between the two mediums, the fact that a 4K screen can show video and be updated over a network means that the high-resolution technology could conceivably become widespread soon.

As if to make the point, a native 4k digital signage media player was recently unveiled by BrightSign. The company claims to be the first to deliver true end-to-end 4k to the signage market, with this solution that accepts H.265 encoded content and delivers 60fps output at a resolution of 3840x2160 via HDMI 2.0.

"4K screens retail for less than $1000 in the US, so not like it’s a crazy expensive proposition,” Jeff Hastings, CEO of BrightSign told us at the launch of the player at the ISE show in Amsterdam. “With our player feeding images in 4k, the output is literally approaching print quality now. As new 4k screens come out and drop in price, 4k will be the next big thing.”

The company is keen to educate the market on the importance of true 4k solutions, not just for static images but also for 4k full frame rate video. “Any broken link in the 4k chain adversely impacts video quality and the output falls short of what 4K is made to be,” said Hastings. “If you don’t have a combination of H.265 compression and HDMI 2.0, the bit rates are going be high, the image quality wont be as good and you won’t get the frame rate. With our new player, the breakthrough is taking the H.265 and HDMI 2.0 and packaging a player that can then deliver that.”

BrightSign sees demand for 4k rising quick and fast in the digital signage market. “Everyone is promoting their 4k displays and I think 1080p will disappear quickly. In our commercial space, everything is now delivered via the internet on file-sizes that are similar to HD, so you can achieve a 4k workflow with no new infrastructure. This year will see a steady rise in 4k adoption and next year will be the year 4k takes off in digital signage.”

The HEVC encoding within the BrightSign player is handled by Elemental.